What it be ? Sea, land or sky! Shall he praise the beauty of the wind among the derelict fields, or kneel before the breathtaking spirit of silence reigning supreme in the downward dive of a snowy giant's high? 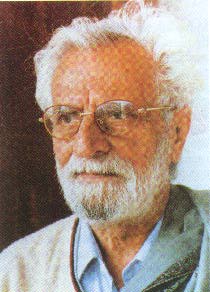 The poet in Keshav Malik penned the lines for Manohar Kaul. Both of them treasure the memory the youth spent in the valley at the foothill of the Himalayas. Kaul would go rowing in the Dal lake with friends and "before we realised, it was two in the morning!" The icy stream killing the stillness of the luminous night, the rows of chinar standing guard at the horizon; the silvery crest of a crescent moon; the world bathed in the purity of the snowflakes: indeed, they looked no further for paradise.

Decades down the winding course of life, Kaul draws on the memory of the ethereal landscape that was his home. The valley lives on in its pristine glory: the woodlands have not lost their leafy haze; the misty mountains are suffused with tranquillity in the canvas of this painter approaching 70. After meditating on the Mystique of the Moon, his watercolours are now celebrating Auras of the Dawn in Kashmir.

Both the series are the fruits of Kaul's communion with nature, "recollected in transquillity and reproduced from imagination," he adds. If, earlier, the artist had used the watercolour medium to recapitulate the transformation of nature in the magic of moonlight, the current work is imbued with the meditative spirit of the day-break hour. The theme acquires a personal significance for Kaul as it did for the sages of yore, "all along my creative years I have worked at this amritvela (peaceful hour), when the atmosphere is so fresh."

Viewing the series at AIFACS, you may wonder why you trace no note of nostalgia, no tint of sadness in the exhibits. That, you may say, would be natural for one who roamed the valley when it was green. Now that it is pillaged and pained, should not the sensitivity of an artist's soul resonate the trauma that rents the milieu? No, asserts Kaul: that's the burden of a reported, an illustrator. "I cannot show a man killing another man," he pleads. But if he cannot show that, he can certainly depict the dream that is sure to dissolve in the harsh reality of destruction. "Also," Kaul hopes, "if people see how beautiful Kashmir is, their desire to retain it will be strengthened."

As a bureaucrat serving the ministry of information and broadcasting, Kaul had gone back to Kashmir in the early 70s."I could never think that the same men, who watched the surrender of General Niazi without any sorrow, could pick up the gun!" The boys have gone astray, he remonstrates.

Kaul's homeland was not only the paradise come to earth: it was of strategic importance to the nation, neighbouring as it did countries like China, Afghanistan and the newborn Pakistan.

Kaul, of course, is as much at home in the Capital which has seen him at his creative best. He has been busy, since he retired from the service in the '80s, bringing out the art journal Kala Darshan. Almost single- handedly, "I have even been the errand boy," he tells you. The experience has undoubtedly benefited the art fraternity, since it has helped Kaul revive Roopa-Lekha, the journal of the All India Fine Arts and Crafts Society (AIFACS) following his selection as its chairman.

In that capacity, Kaul has worked another wonder: the four galleries, which were once given up by artists for its derelic condition, are now among the best in the Capital. Besides, there are plans afoot to build up a library and a conference hall "as at IIC". The Society is expanding too: it has acquired buildings "at Ghaziabad, for the graphic artists and at Chandigarh too." It has ambitions of providing studio space to artists, "for six months at a time". Above all, it is honouring veteran artists - those above 60 - and giving them "a small amount of Rs. 3,000 per annum."

All this for the world of artists. And in the small hours of the morning, before the world starts making its demands on Kaul, there is the divine landscape which the artist carried within him when he left Kashmir behind.

Paintings This time I am presenting latest water-colour landscapes which are bound to soothe you and all the connoisseurs of Art. You will also have a glimpse of some earlier works too. Some of the works are based on colour therapy. I have been studying this subject over a decade and my experience has been that "each colour has its own meaning and, a special quality". Colour has a mystic power much as that of Gems which are suggested by Gem therapists the world over. These therapies are mostly applied after studying the planetary position in one's horoscope based mainly on the vibrations of the celestial objects rotating around the cosmos.

I have realised that colours have curative powers for various forms of ailments. In some cases, I have observed that different colours have varied impact on not only human beings but even on animal life as well. Varied environmental atmospheres also have an impact on the living denizens in different areas, which is due to the colours of the flora and fauna encircling them.

Faber Birren, a noted colour therapist is of the opinion "that even blind people react to light (which has a spectrum of colours) through their skin, like others". He further opines that, "Perhaps as long as the organ of perception is in the brain, and not the eye, clues from the skin can be used by the blind to 'see' the world and its spectral hues."

In this mystical therapy 'Aura' plays an important role. Faber Birren further says that all plants and animals, like human beings, have their 'aura'. This has been confirmed in modern times. The aura is a most important ingredient of the entire entity, as much as the body. Every one has believed in the healing power of colour from ancient times. Even modern medicine has acknowledged the value of Infra-red radiation which is helpful in relieving certain pains, and mental blocks. Theo Gimble has been using light and colour to treat various ailments for several years in England.

From my young age I was fascinated by colour and I would always prefer to go to remote areas of the Kashmir Valley to enjoy the colour vibrations which brought me peace of mind.

You would be surprised to know that I have been picking up the colourful pebbles on the hilly roads and in the streamlets. The fact is that from the very beginning I have been attracted by the magnetic colours.

Some landscapes I present are in fact based on the colour therapy which can play an important role in helping to cure many disabilities. Therefore the presentation is a combination of aesthetic values as well as the curative powers of colours.