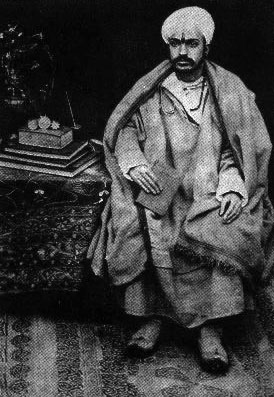 [ Recently (NSKRI) had the privilege of interviewing Sh. J. N. Pandita, second son of Pandit Nityanand Shastri, the great Kashmiri scholar after whom the institute is named. The octogenarian Sh. Pandita, who had come to Delhi for medical treatment, spoke on various aspects of his scholar father's life and personality, revealing many interesting facts. Some of these are given below. ]

According to Sh J.N. Pandita NS was born in 1874 and the time of his matriculation, there were but two matriculates in the whole of Jammu and Kashmir State - Agha Syed Hussain and Ved Lal Zutshi. NS had his preliminary education as a private student as there were no regular schools in the state those days.

Having a firm grounding in Sanskrit, a family tradition, NS wanted to study English also, but his father, for whom learning English was as good as becoming a Christian, was dead set against it. NS however, studied the language secretly, learning it from one Srikanth Khazanchi, and soon mastered it.

His knowledge of English came handy to him when he met the famous orientalist Sir Aurel Stein at Lahore. NS had gone there to sit for his Pragya and Stein was then Registrar of the Punjab University (of prepartition days) which conducted the Sanskrit examination. The meeting of the two great scholars was a great event leading to their life long friendship and commitment to Sanskrit. The two collaborated and cooperated in producing several important Sanskriti works of Kashmir, NS's vast knowledge guiding Stein many a crucial point. Others who benefitted from his scholarship included Grierson, Vogel, Winternitz and Vreese. NS started his career at a young age of 16, teaching Sanskrit at a government school in Srinagar. Later, he obtained the degree of Shastri, the highest in Sanskrit those days, and afterwards became Professor of Sanskrit at Sri Pratap College, Srinagar in the year 1916. NS distinguished himself by going to college always wearing the traditional Kashmiri attire. He never wore a western outfit.

NS was among the leading Kashmiri Pandits who met Swami Vivekananda when the latter visited Kashmir in 1897. There is a group photograph commemorating the event. He also met Lord Curzon, then the Viceroy of India, and presented to him a welcome address in Sanskrit verse during his visit to Kashmir in 1906.

Among his peers and contemporaries were prominent figures of the times, both Kashmiri and non-Kashmiri and they were not limited to the literary or academic circles. These included Pt. Daulat Ram, Prof. Gyani Ram, Dr. Kulbhushan, Dr. Balwant Singh, Pt. Parmanand and Pandit Narayan Dass. Notable among his students were Shri T.N. Kaul, former diplomat, Shri P.N.K. Bamzai, noted historian and Smt Pupul Jaykar, cultural zarina. When NS retired as Professor in 1930, it was Shri T.N. Kaul who read his farewell address.

Pt. Madan Mohan Malviya was a great admirer of the outstanding Kashmiri scholar. Struck by his vast knowledge and erudition when he met him at the Rawalpindi session of All Hindu Mahadhama Sabha Sammelan in 1929, Malviya Ji invited him to join the Sanskrit faculty at the Benaras Hindu University. When NS expressed his inability to do so due to family obligations, Malviya Ji exclaimed, "The portals of Benaras Hindu University will always remain open for you. You can join whenever it is convenient to you". Sir Aurel Stein too offered him a faculty assignment at Oxford, but NS had to decline, again for the same reasons. NS's fame as a scholar of encyclopaedic range spread far and wide, in the country and abroad, but due to family circumstances he had to stay for the most part of the year in Srinagar. But during the winter months, when his college would close for vacations, he would find time to visit various centres of Sanskrit learning in the country. These included Benaras, Allahabad Prayag, Lahore and Gaya, where he found pleasure in interacting with other Sanskrit scholars.

NS was, however, not only just an academician, he was equally active in the social and cultural fields. While being the president of Sanskrit Sahitya Parishad, a Sanskrit literary organisation he founded in 1930, he also established a charitable trust named Vanita Ashram to help widows and destitutes. As a philanthrop, he had few peers. Throughout is life, every month NS secretly donated one tenth of his income in charity.