by Braj B. Kachru

Kashmiri mothers often tell their children the stories of Mahadev at bedtime.

It is said that during the reign of Maharaja Partap Singh, Mahadev was considered the leader of thieves in Kashmir. He was never caught in the act of stealing. Mahadev had perplexed both the police and the government. Whenever Mahadev went out to steal, he would do so like a cat, without making a sound. They say that is why he was called Mahadev bishta. Kashmiri children refer to a cat as bishti. Mahadev would even mew to make people think that it was a cat. They would shout "bishti, bishti" - a sound made to scare away cats - while Mahadev took off with the loot. 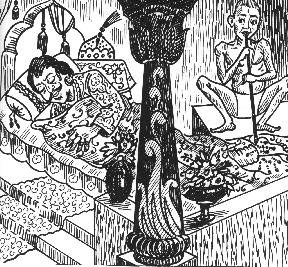 It is indeed a fact that Mahadev was a well-known thief. It is also true that he would rob people of their property and wealth. But, in spite of that, people used to sing his praises. The people loved Mahadev because he would steal from the wealthy to provide for the needy.

There is a particularly well-known story about Mahadev. One day the thieves decided that even though Mahadev was, without a doubt, their leader, he would still have to undergo a test. In a meeting, they also agreed upon the way he would be tested. We shall now tell you the story of this test.

One day Mahadev was invited to a gathering of all the thieves. One thief stood up and addressed Mahadev thus: "Hey, Mahdevju:, we all consider you to be our leader. We are all in awe of you. But, in order to prove your superiority, we would like you to take a test. If you agree, it will enhance your reputation and our trust in you will increase." Mahadev became very serious and replied: "Yes, of course, I am ready for a test." As soon as the thieves heard this reply, they blushed. One thief slowly stood up and said: "All right, Mahdevju:, we want you to make our Maharaja take off his trousers. These trousers should then be presented to this gathering. The Maharaja should know nothing about it " Mahadev smiled and said: "All right, if that is what you want, so be it. It is not a difficult task." On hearing this the thieves were delighted and the conference of thieves came to an end.

First, Mahadev went out and filled a piece of reed with vicious red ants. Then he came home and had his body massaged with oil. He then put on a lango:t(loincloth) and looked at himself in the mirror. He was very pleased with himself . And with a mischievous smile, he left for Shergadi. It was midnight and pitch dark when he arrived. Mahadev swam across the kitikol. Then, after reaching the royal palace, he entered the bathroom of the Maharaja through a pipe. From there, like a cat, he entered the bedroom of the Maharaja.

Mahdev saw that the Maharaja was sound asleep. He slowly took out the reed and dropped the ants near the Maharaja's feet. These vicious ants spread all over the Maharaja's legs. They made him miserable with their bites. The Maharaja started scratching his legs with both of his hands. He was so uncomfortable that, in his sleep, he took off his trousers and threw them aside. Mahadev was delighted. He quietly picked up the trousers, and, again like a cat, walked out through the pipe through which he had entered.

The next day Mahadev went to the gathering of the thieves with the Maharaja's trousers. When Mahadev arrived, the thieves were impatient to know if he had been successful in obtaining the trousers. Mahadev haltingly opened a bundle, took out the trousers, and placed them on a co:ki: with a smile. On seeing this, all the thieves stood up clapping their hands and singing the praises of Mahadev bishta. Mahadev was deeply pleased. The thieves again accepted him as their clever leader. There are many other stories about Mahadev bishta which entertain the Kashmiri children.

Reproduced from:
An Introduction to Spoken Kashmiri
by Braj B. Kachru (URL: http://kachru.com)
Department of Linguistics, University of Illinois
Urbana, Illinois 61801 U.S.A.
June, 1973