MISSION: Punia was part of a frontal attack stalled by a machine-gun nest. While crawling up he was hit, but before he died he hurled a grenade and silenced the nest. 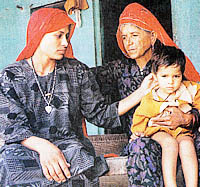 Like all little boys, Punia spent his childhood listening enraptured to the tales that soldiers from his prosperous Jat village, Bhensali in Rajasthan, brought with them on their visits home. So, as soon as he turned 18, Punia dropped out of high school and signed up, ignoring the entreaties of his elder brother -- a havaldar with 8 Jat Regiment -- to get an education.

Punia became a fearless soldier, volunteering to fight terrorists in Kashmir. At home, villagers recall how he always craved for a war and to defeat Pakistan. That bravado always shook his gentle mother, Chandro. "The bullet made for me will take my life," he told her. "No one can help me then." Prescience?

Perhaps. A single bullet pierced his temple and killed Punia on May 24, but not before he saved his comrades high in the mountains in a lonely place they call point 4590 on Tololing's saddle. Part of a frontal assault wave against intruders entrenched in bunkers, Punia saw two of his buddies fall and the rest pinned down by a machine-gun nest. Inching his way along a rock face where a fall meant instant death, Punia was hit in the chest. Blood oozing out, he reached for a grenade and silenced the nest. The gun position came alive a few hours later, but it gave his unit time to escape. Today, point 4590 is back in Indian hands.

Sacrifice is almost a tradition in the region, known for the valour of its soldiers. The country's first Param Vir Chakra in the 1948 war went to Beri village, just 2 km from Bhensali.

Youngest among his three brothers and two sisters Punia, all of 6 ft 2 inches, was known for his sense of humour and devotion to community, pitching in to build additions to the village high school while on leave. Punia was also fond of playing cricket and basketball and named his only son, Sachin Kumar, now one-and-a-half- years-old, after Sachin Tendulkar. His widow Sumitra, 19, also from a family of soldiers, refuses to shed a tear as she looks forward to driving a tractor in the fields. "She is now my son," says Chandro. In this ancient land, death is a time for grief, but it's no more than a hiccup on the road to honour.