The First Royal Artist of Kashmir

It was dark-cold January, the sun so pale and silent had set in horizon. The street oil lamps were lit, flakes of snow began falling. It was the first snowfall of the year 1888 AD and the auspicious hour dawned the birth of a babe destined to play a memorable role in the annals of paintings, art, portraits and photography. 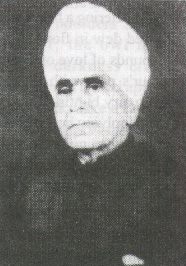 The strange coincidence that marvelled the later artist was the fact that "Ben Johnson" the reputed genious and an artist was born the same year in Phillandaphial (USA) christioned. Shree Maheshwer Nath Dhar, the boy-grew up in close association of the miracles of nature. Still in his early teens he started building clay forts, hills, modelling birds, trees, natural scenery and everything that caught his immagination.

At the age of fourteen he left for Gwalior and returned after eight years in 1910 AD. During his short stay there he worked in the State Public Works department as a draftsman. Back in his native town of Srinagar, he gave a display of photography, portraits and many portraits of "Yog Sadhna" and spritual portraits on different mantras of Goddess Uma, Raginia Bhagwati and Shail Putri.

A portrait of Devi was also placed at Devibal temple Anantnag.

Being unknown in the eyesof general people of J&K, nobody was his teacher. As such it was he himself as was quoted by him. The inner spirit that guided him along the parth "The voice came from inside", he adds. Time passed on and the king of Kashmir Sh Maharaja Partap Singh, at the instance of his courtiers gave him an audience.

Hon'ble Maharaja Partap Singh was immensely pleased to see his paintings, portraits and camera which the young artist had himself shaped in a different way.

Immediately he was appointed (Royal Artist) and adequate arrangements were made within the palace at Jammu to design studio, besides a set of residential rooms.

Thus came he to live in the Royal House hold flanked by the nobles, courtiers and lovers of the art. The artist began his work by reshaping age-old paintings in the palace. Much of it had decayed and the paintings on the walls had damaged. His studio overlooked the Tawi River and the fair sights of hills and gardens generated sublime idea as the artist.

The Hon'ble kind would often spend few minutes at his studio, look after his needs and comforts. The kings of Patiala, Palampure, Gwalior Nabha and Indore often used to visit the artists studio while they were here as state guests.

The paintings of Kangra, Gwalior, Noorpurah and many other places of Himachal Pradesh were so dear to the Royal Artist and he would brood for hours on them.

The artist was also fond of Rajput paintings. During this period he "drew" hon'ble Maharaja and painted and painted afresh his ancestors, the Dogra Royal family. These paintings are put on display at state Museum in Srinagar.

The Royal patronage was not destined to cover up the entire career of the Artist. Hon'ble King died in 1925 AD and Royal artist had to vacate from the palace. The heir to the throne hon'ble Maharaja Hari Singh had his own ideas, ways and tastes and therefore terminated the services of the Artist and hundreds of others who worked there.

The artist spent later part of his life in his home working constantly at his studio in Banamohalla Srinagar. In 1935 the then Prime Minister of the state Sir Gopal Swamy Aingar utilized his services to renovate the world fammed monuments "The Martand Ruins".

Incidently his starts twinkled again and shown forth with moral brilliance; as India obtained freedom. The first popular Prime Minister of the state Sher-i-Kashmir Sheikh Mohd Abdullah felt so joyous to partose his art. The lion of Kashmir loved him and respected his contribution. With the passage of time the patronage shifted to Bakshi Gulam Mohd; the 2nd Prime Minister (1953-64). He also respected the Krishna Dhar D/o Mehshewar Nath Dhar artist for his artistic capability.

The artist-my father was also man of sprituality but unknown to the common people. In this connection I hereby quote an example which clarifies the artists advancement in this field. Once his "Guru" who was a saint-scholar of Kashmir at that time, asked the artist to draw an attractive picture of the "Amriteshwera Bhairava". No clues were given by the Guru. He accepted the order but could not give any shape to it. After few days he approached the master to express his inability. The Guru was annoyed, he just blessed the artist. The same night he was directed by an invisible soul in a dream about the sketch of the drawing. He woke up frightened and drew the sketch hurriedly as directed. The Guru approved it and the painting was there for posterity. This establishes the place of artist in the field of sprituality too.

The artist (my respected father) felt again and often complained of mascular fatigue. His health steadly declined but the communion that held him fast with his studio remained uneffected. The famous artist Mohan Ji is stated to have said "If I ever go into heavens, I will ask about MN Dhar a famous Royal artist". On 12th May 1971 great grand artist passed away full of honour and fame, shortly after he finished his prayer with "Pranayama" .