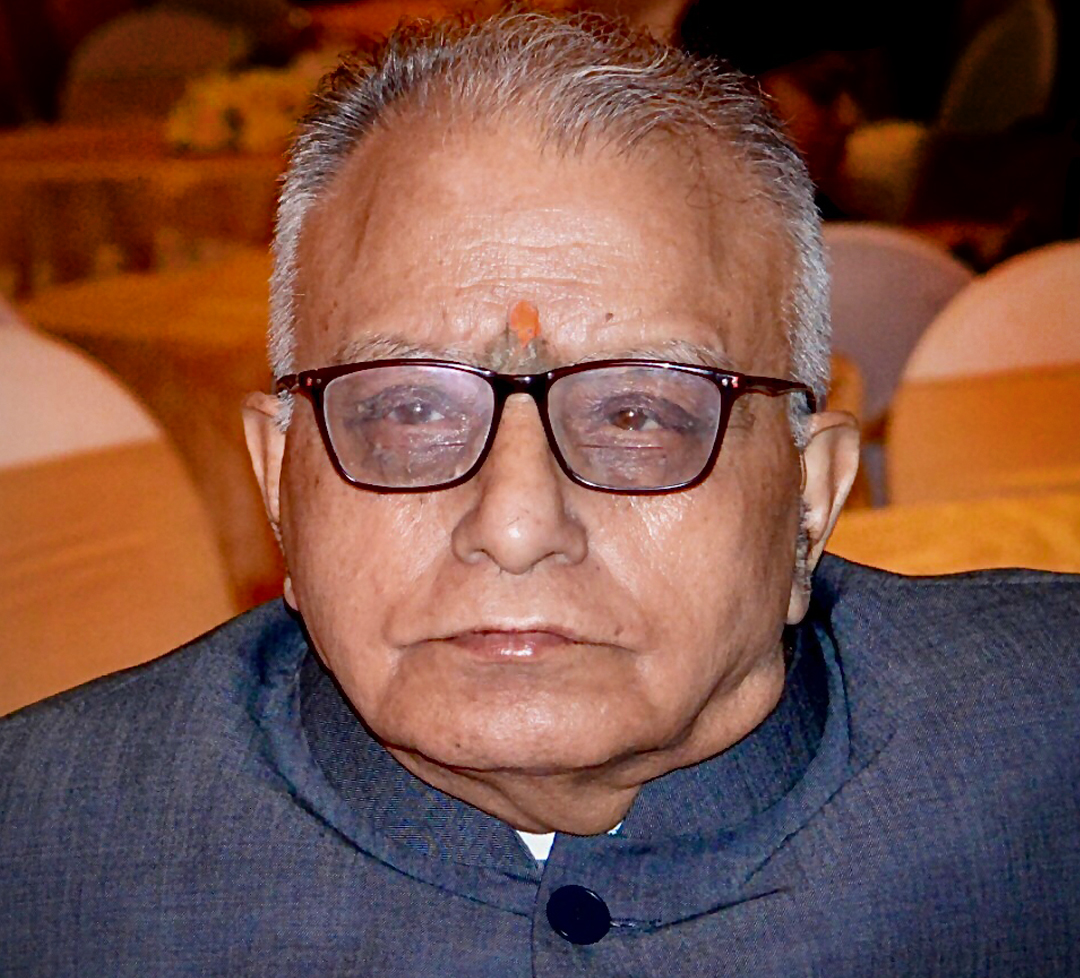 On November 17, 2020 my father Professor Chaman Lal Sapru as the world knew him, left for his heavenly abode. In the days since, the outpouring of genuine love and blessings from one and all has humbled all of us, the family he leaves behind.
Professor Sapru, a true karma yogi, was tireless in his endeavour to spread knowledge, empathy and make the nation and world a better place.
An embodiment of positivity and empathy, he was tested with adversities from early days, and yet he always met them head on with a smile and placed the need of others ahead of his own.
He touched a million lives in his lifetime, as a teacher, a reformer and a humanist. We would like to express our heartfelt thanks to each and everyone of you for your messages and gestures over the last ten days.
He lives in all of us, his actions and beliefs guide us to seek spiritual growth and that of our fellow beings. Om Shanti Shanti Shanti. 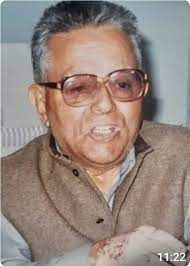 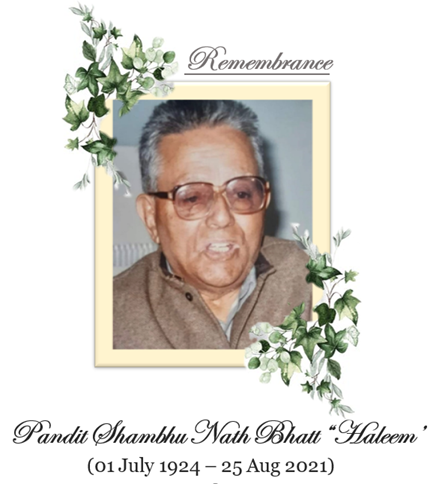 On 01 July 1924, a noble soul descended upon village Arreh, Kulgam, Kashmir and Pandit Shambhu Nath Bhatt ‘Haleem’ soon blossomed to be a sterling star in the galaxy of poets & scholars who made outstanding contributions to the enrichment of Kashmiri literature in the independent India. After leading a fulfilling and distinguished life, on 25 August 2021, he peacefully & silently slipped away to the infinite meadows of heaven, getting subsumed with the mother nucleus in the heavenly abode of the Mahadev. With his demise, Kashmir has lost a beautiful voice, an erudite legend, and a noble soul. One lives in a hope of becoming a memory, and here is ‘Haleem Saheb’ whose memory has been etched in our hearts forever. The rich legacy that he has left behind would continue to inspire many in the times to come. He will be dearly missed; his gentle spirit will be deeply remembered for ever.

Even though, Pandit Shambhu Nath Bhatt ‘Haleem’ left the valley in pursuit of higher education and professional excellence early in his life, Kashmir always stayed uppermost in his mind, that is where his heart lived. He assiduously and relentlessly pursued the cause of Kashmir outside Kashmir. He made remarkable efforts to keep the Kashmiri language alive as a language of everyday parlance. In a forceful plea to the community he once said, "It will be impossible for us to preserve our culture if we are not able to preserve our language, because language is the foundation on which the edifice of culture stands. If this foundation is weak, we shall be only building castles in the air ". The Kashmiri language and the people of Kashmir would ever remain indebted to Pandit Shambhu Nath Bhatt ‘Haleem’. Besides many accomplishments well documented, he will also be remembered for crafting and then promoting Kashmiri in Devanagari Script along with fellow protagonists, that many of the Kashmiri diaspora today use for written Kashmiri communication and literature.

After graduating from Punjab University Lahore, he completed Prabhakar (Punjab University) and Sahityaratna (Sahitya Samiti, Mathura), he became the voice that every Kashmiri loved as a noted veteran broadcaster of the All-India Radio, New Delhi, where he had an illustrious career of nearly four decades, much of it as the Head of the Kashmiri Section of the News Services Division. His poetry and prose won many accolades not only in the valley but throughout the country which included Sauharda Puruskar of UP Hindi Sansthan Lucknow, Sharda Puraskar & felicitation in the Second World Kashmiri Pandit Conference, and Book Prize in Kashmiri from Ministry of Education. A prolific writer with more than twelve books in Kashmiri to his credit, Haleem  also wrote in Hindi, Urdu, and English.  Some of his popular works include Bala Yaar 1960 (stories for children), Rut Shahri 1962 (hum), Lal Ded 1976 (Hindi Version of Lalleshwari’s Kashmiri poetry), Pankh Heen Panchi, 1965 (Hindi Translation of Thakur Puncchi’s Urdu Novel), Kashmiri Sahitya ke Gat Saath Varsh, 1960 (survey of Kashmiri literature); Baba Farid’s Sayings & Nund Rishi’s Shrukhs (both translated & edited). His last book ‘Zindagi Roothe Nahi’ (2012) a collection of his Nazams, Ghazals, Geet, Qata 'at in Urdu is a modest collection of his musical speech and owes much of its beauty, its magic, its peculiar power of stirring the feelings and arousing the imagination, to its verbal felicity and its varied melodies of meter and rhyme that is soul stirring. He translated more than one dozen books into English & Hindi, and edited multilingual periodicals Pamposh & Kashur Samachar from Delhi, and was in the editorial committee of Vaakh. A collection of his published and yet to be published essays on varied subjects would run into thousands of pages, and amply reflect on his intellectual depth. He gave new words and idioms to the Kashmiri language, much of it inspired from his rural roots.

Haleem’s poetry did not bear the burden of traditional metaphors of Shama-Parwana, Gul-Bulbul, Aashiq-Mashooq. He was earthlier and drew his inspiration from ordinary humane elements of thoughts & emotions, that he portrayed with vividness, beauty and propriety of language and imagination.

“Yes, this is the very tree

And this verily is the place

It was here on a moonlit night

she made a promise

And I drank the nectar of acceptance

But she never said the sacred words

That my ears craved to listen

And in my innocence

I was gratified with the thought

My friend 's language of silence

Indicated the greatness of her speech...”

His verses, though simple in style and vocabulary that connected to the common man, have some meditative and philosophic rendering. Life was Haleem 's subject. He loved and adored life and enjoyed its glow and fragrance. He rejected the very thought of life being offended. Indeed, his writings were a tribute to life.

“I always wished to live

And be happy with whatever life offered,

Each time it dawned; I rose-up like a crazy lover

And when evening fell

I huddled and quietly waited

to see once again a new morning”.

Unlike many authors of his community, Haleem’s  poetry, amazingly, had no space for angst. In his humble and affable demeanour, he would say, “How can I be a migrant in my own country.... struggle must go on and we shall surely see tranquillity and harmony in the valley soon”. In his almost folk style and simple language, his poetry celebrated life, as if he was singing the song of life:

“The only reward and result this world offers, is life

Life only, and nothing, but life

If there be no life, God and its faithful shall not exist

...Ever thought, why, and to serve what purpose

we live the pain of indulging in duty, service, and prayer

It is the cause of blooming and enriching life

O ' Haleem, I pray, may life not be offended

and the pleasure of movement of life not cease

for It is the very force of life that creates and sustains us all...”

Indeed, Haleem’s  life was a blessing, his memory a treasure. Today we celebrate Haleem’s  life, his endeavours, his poetry & prose to keep his memory alive. An incredible man and a beautiful soul, Haleem  may be gone, but he will never be forgotten. 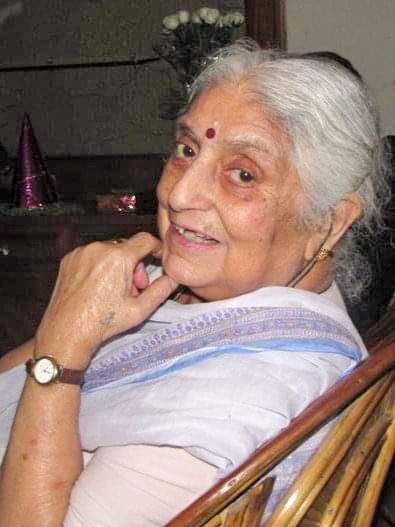 With profound grief, we would like to inform the community that our dear mother Smt. Gowri Shouri Kakroo (Bakshi of Mallik Angan, Fateh Kadal), wife of (late) Shri Kashi Nath Kakroo (Zaindar Mohalla/ Peerbagh) left for her heavenly abode on 5th May 2021 at Indirapuram, Ghaziabad.

The cremation was held on 6th May 2021. We pray for her soul to attain moksha and find peace. Om Shanti. 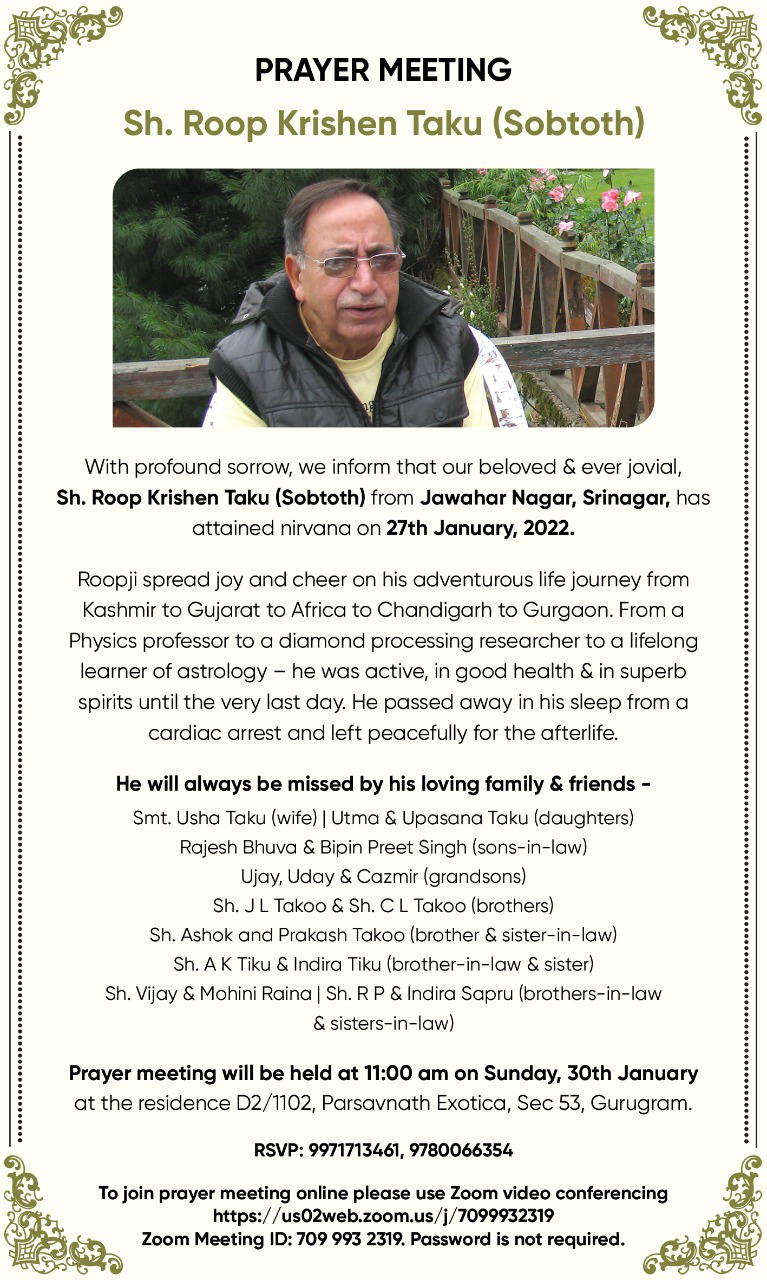 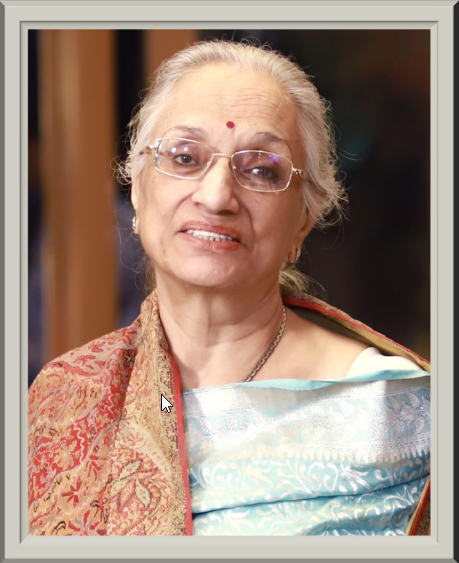 Smt. Sudesh Saraf Zutshi, daughter of late Pt. Sham Lal Saraf and late Smt. Gunwati Saraf, and wife of Shri Kundan Lal Zutshi for 59 years, passed away peacefully last Monday, January 11th, 2021, at her home in Bangalore. She was surrounded by her family when she left for her heavenly abode.

A multi faceted and compassionate personality, she was a great mother, a great academician, and a beloved grandmother, and was dear to all those who knew and learned from her.

We pray to the almighty for her moksha.