The Painter of Past Images and Present Impressions

"To verbalise the texture, hue, shadow area and sudden burst of colour of a fleeting image imprinted on the mind's eye is difficult at the best of times. To rediscover in words the gallery of images that unfolds along the corridor of time is nearly impossible. What returns to verbal language is mostly a montage, with large areas of association missing. The perception and aesthetic assimilation of any visual experience do not even return in words. They get into the colour technique and style and permeate the artistic persona".

Kishori Kaul was born in Srinagar in 1939. Her father was a Kashmiri Pandit of unorthodox views serving in the Government. She studied in Annie Besant School, Srinagar. The year 1953 was a year of great significance for her. She fell ill with tuberculosis and while she lay tossing between hope and disappointment, her grandfather, Narayan Mu, her grandmother whose father was Narayan Muratgar, a celebrated painter of the late 19th century, placed before her brush, colours and paper and thereby set the ball of aesthetic sensibility rolling in her mind. No doubt, Kishori already had a penchant for painting but now she got so engrossed in artistic work that she forgot about her surroundings full of sorrows and sufferings with the result that she got cured of her dreaded disease and, at the same time, emerged as a great painter. It was a marvellous occupational therapy for her which brought a cataclysmic change in her life and character. 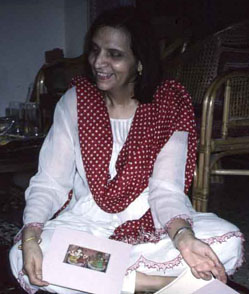 Her first teacher was Som Nath Bhat and then she joined the Faculty of Fine Arts, M.S. University, Baroda in 1959. Soon herartistic excellence was recognised and she got awards and prizes galore. She received

Kishori exhibited her paintings in Srinagar, Bombay and Delhi along with G.R. Santosh, Trilok Kaul, P.N. Kachru and others. In 1968 she fell in love with and married Mr. Inder Varma, scientist and journalist. She has held many exhibitions of her paintings in India and in foreign countries.

She generally works on canvas with oil and her remarkable paintings

There are three main characteristics in Kishori's paintings. One, the pictures of her childhood in Srinagar are etched in her mind and then by a magical trick she can associate the present with the past images. She appears to have a mental camera in which are reflected and kept secure the images of her earlier life. She lived her earlier life in Srinagar, Her house was situated on the bank of the river Jhelum and she loved to watch the boats floating on the surface of the water. She would also enjoy the quarrels of the families of the boatmen. She had her deaf aunt who was quite eloquent in narrating tales of wonder.

She remembered the songs of the peasants of her mother's village where her parents lived and, according to Kishori, the sun, the sky and the water and mountains would assume life and form. From another woman she heard the stories of love and separation. All these experiences gave her unique joy. Nothing seemed to depress her. She recalled with nostalgia the colour ofthe fields in Dal Lake when the children were taken for a four or five days' picnic in a Doonga; the gold spangled waters made her feel that she could walk on the surface; the needling of petals into necklaces in Nishat as Kawa would be poured out of a samovar she also well remembered. 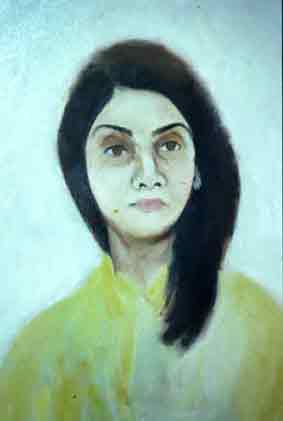 The fountainhead of her art lies in her childhood experiences and the images she preserved in her mind. Her mother's guidance and criticism in the beginning also helped her to fashion her work. Above all, Nature was her great teacher. She writes:

"My process of conceiving a work is linked with Nature's inherent structures and their ability to strike a deep resonance within my memory. The downward rush of the crystalline water or a mountain stream, splattered with light streaking through the overhanging branches of trees, determines the structure of a painting...The sudden, swift flight of a bird, the limb of a tree cutting across space, the little world of my garden in the middle of the city-all become starting points for the reconstruction, through colour, of fleeting but profound sensations".

Although Kishori has a photographic memory yet her art creations are emotional representations of images and ideas. Her mind is biased and it colours according to her emotional prejudice. If we contemplate on her painting: "Earth, 1953", we see that there grow flowers all over the earth of varied hues and then at the back are hazy hills and the few cottages and the ground flooded with sunshine. It is an isolated piece of earth where there is peace and calm. There is no room for sorrow, only beauty is sprinkled all over. Kishori in this painting appears a mistress of colour and the lines are misty. In her painting Kishori stands like a rock refusing to be carried away by the tides of cheap commercial art.

If we see her another painting, "Still Life with Blue Vase, 1993" we find that her painting reveals a whole gamut of colours in many nuances and shades. This also confirms that Nature is the vast reservoir of colour and beauty which provides her the inspiration. Her quest has been to capture the evasive mystery of colour that she finds in the play of light on the natural objects. Her landscapes, though instinctively belong to Kashmir, yet they go beyond the topography of Kashmir but the contemplation; of the varying moods of nature.

When we see Kishori's other paintings like, 'Lotus Lake,' 'Green Fields,' 'Sunset,' 'Autumn;' 'Still Life with Samovar', we find that she is a product of the social milieu and the environs of Kashmir determine her basic consciousness. The evolution of varieties of landscape form created out of soft line and delightful colour constitutes the essence of her art. She has an extraordinary gift for colouring.

Kishori has now grown quite mature and it has now become easy to assess her art and her predilections. Kishori Kaul cannot be classed in one particular group. She has her own individual style based on her earlier impressions and influences and keen observations of her environment cast in the mould of her passionate imagination. She does not brood over the miseries, personal or of others. There is not in her the attitude of Keats: "O what can ail thee.../Alone and palely loitering?/ The sedge has withered from the lake/And no birds sing," as we find in Ram Kumar. Her paintings smile with vital lyricism. It appears as if her dreaded disease T. B. consumed in its fever all her disappointments and hopelessness. That she has come out quite healthy and free of the disease, has given her hope and thereby the proof of Divinity. She succeeded in inviting exquisite sensitivity with a superbly vigorous technique.

When we look at the face of Kishori herself we find her sparkling eyes and gentle smile bespeak of her poetic temperament and the optimistic attitude- "All is well with the world". This attitude is diametrically opposite to Padma Sachdev's poetry, who, too, was suffering from T.B. in her young age.

In the Amar Mahal is the picture of a woman, her two braided tresses hang in front on both her sides. The face is only suggestive, for it is misty. The lady appears reflecting on the pleasures of life. The on-looker on contemplation of the picture is led to follow his own train of ideas by the psychological process of association.

What is significant about Kishori, it may be repeated for emphasis, is that she accepted Nature which became her inspirational source. It may safely be insisted that her imagination had its roots in the observation of Nature and her creations belong to a world never wholly divorced from reality. Secondly, reminiscence stimulates her imagination and her most beautiful landscape. Recently she has tried her hand on portraiture, which is free from any semblance of imitations.

The Rich Heritage of Jammu and Kashmir Studies in Art, Architecture, History and Culture of the Region By Prof. Somnath Wakhlu