The Painter of Divinity

It is hard to believe that the people of Kashmir, who could have built such magnificent temples at Martand and Avantipur, could have lagged behind in the art of painting. But there exists some good work of pictorial art in Kashmir. Possibly, the cruel hands of Nature and Man destroyed it.

At present there are some talented Kashmiri painters who fill up this unfortunate deficiency very well. Among them are two artists, one male and another female - Shree Ghulam Rasul Santosh and Ms Kishori Kaul.

Santosh was born in Srinagar, Kashmir in 1929. He took to many devotions-painting, weaving, papier-mache and then to kashmiri poetry. For two years 1954-56, he went to Baroda University on the Government of India Cultural Scholarship to study under Prof. N.N Bendra. He was awarded Padma Shree in 1977 and then in 1978 he published a selection of poems in Kashmiri.

He exhibited his paintings in India and abroad. From 1963-66 he gave exhibitions of his paintings in New York, Kabul, Tel Aviv, Los Angeles. In 1950 he had participated in a group exhibition of Indian artists in Eastern Europe. In 1959 he went to Canada, Zurich, Atlanta, Japan, South Florida, New Orleans, San Francisco, Honolulu, Hong Kong, Morte, Singapore, Cannes (France), Bulgaria, Germany and many other foreign countries. 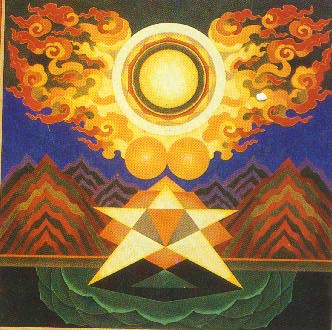 Ghulam Rasul Santosh, no doubt, was moulded by Western ideals in some subtle and direct manner, for art of painting in Kashmir had no moorings. This was in the beginning of his career. In the Amar Mahal Museum is one such painting in which Santosh has depicted Mona Lisa emanating from the creative brain of Leonardo da Vinci. The idea, undoubtedly, is a good one and the colouring superb like that of the original Mona Lisa but he could not imitate the figure of the original Lisa. Santosh also painted certain Kashmiri scenery in something resembling the Impressionistic style.

But in 1965 there was a metamorphosis in his personality. It was a spiritual nature, as he became aware of the true purpose of art, which forced him to do some thorough thinking. He thought that the summum bonum of life is happiness and that happiness based on material concepts and physical pleasures could be useless and ephemeral. Therefore, he felt that there was no alternative except to seek some spiritual solution. There he seems to have come under the spell of Lal Ded and Nund Rishi, the two great mystics of Kashmir. He felt that the answer to all life's problems lies in religion.

Although he is a perfect Muslim believing in the tenets of Islam yet he is also a liberated Muslim. He could not shake off the Kashmiri tradition and felt the impact of the Trika philosophy of Kashmir. He says:

"That which activities the body (sareera) by the exhalation and inhalation (pran-apan) of breath is Tantra ".

The unison of this vital process (prana-shakti, in the Mumbhaka) and its retention as a soundless state of sound creates the beautific sound, sabda. The soundlessness (asabda) of the void (sunya) which is the universal womb (Brahma yoni) reverberates with the primordial sound and leads to the birth of reverberating image (sabda skara).

Sound, centralized as a point, (nada bindu) is the primeval visual perception, is self-illuminated (atma prakasa) and is the abode of the male-female phenomenon (Shiva-shakti), The pristine geometrical concept (sabdabrahma). When the folded universe of subjective reality unfolds itself, it takes the limitless, complex forms as Nature (prakriti), the materialised world of sound-light-energy perceived and related to the senses".

Santosh further explains: "The Universal mind (Brahman) manifests itself by its own will and when transformed in an artist's mind becomes self-creative. The individual mind of an artist has the potential to transform the visual concept into the materialised creative expression: a work of art".

But he has been taking a good deal of interest in the Kashmiri Shaivism. All this search has given him a new vision which is reflected in his works.

Santosh's ideal seems to be modelled on that of Lai Ded; that is a supreme concern with and directed towards enlightenment and self-realization. The whole universe is due to the continual interaction of Purusha and Prakriti. The Samsara is like a walnut with the two kernels so close that they look as one and the hole is covered by a single hard crest, difficult to be broken. The two halves of the walnut are Shiva and Shakti, and the hard crest being Maya. Self-realisation and liberation is the ideal of both Lal Ded and Nund Rishi.

But G.R. Santosh's tantric doctrine is anti-ascetic. Fee does not believe in the suppression ofthe senses but wants to increase their power so that they can be perfectly utilised in the service of achieving union with the Supreme. Thus Santosh asserts that sex and happiness are closely interrelated. He would not like to escape from the problems of the world and free to the Himalayas. He says:

"My inclination is to go through the phenomenal world which in any case no one can avoid. Then, why not accept it with equanimity, this world of Maya, and try to sublimate some aspect of experience of life... I am convinced that pleasure is no sin. In fact, contentment is bliss. Sex is an act of life and I regard it as a symbol of all desire... Sex and desire are never regarded as an end in themselves but a means of self-realization. (It is a question of knowing and knowing before transcending its hold.)

In the Amar Mahal Museum, Jammu is a superb painting done by Santosh in yellow, black and little red in which are shown out-spread buttocks of a female and in the centre, that is Yoni, is a Shiva Linga. The painting is titled as Jivan Jyoti (The Light of Life). Herein human sex is considered as a transcendental experience and a human form, in male and female aspect, in sexual union, is fulfillment of a perfect joyful trance.

This is yoga and this produces the seed-tree which keeps the fire-flame of l ife living. This is the idea that is represented by Santosh on the canvas. 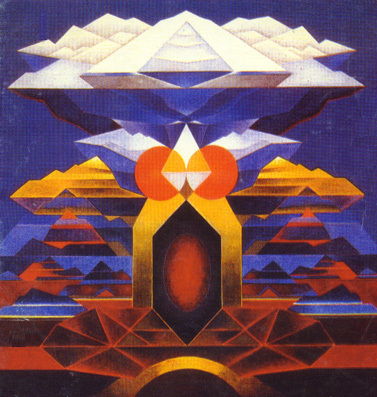 Santosh generally uses a square and a trident to emphasize his tantric or Shaivite symbol. He himself says that he uses it quite deliberately as a Shaivite symbol and owes it to the Trika philosophy of Kashmir which he has mastered. Actually, he, it appears, considers a square as a window or a screen to cover sometimes the necessity of showing yoni and lingam. Only it is given in suggestion. He uses trident because of his predilection for Shaiva philosophy of Kashmir. He uses black colour to symbolise the darkness and yellow is the colour of light or knowledge. Whatever Santosh paints, he does not think and form images. It comes to him naturally as he breathes unconsciously.

His paintings convey different things to different people. Someone may recognise the sensuous beauty in the paintings; the breasts, the buttocks and lingam-the immense symbols of sex. One may be led to think as if he wants to discover like D.H. Lawrence, the British novelist, "a free flow of the passionate life; it seems to have become for him almost "a mystical ideal, for there was fulfillment and there was power". Some may be affected by the intellectual power and moral force of his genius. But all will feel the haunting mystery of his lines and plain colours. All in all, there is "the hunger of the human soul for those impalpable mysteries that touch the horizon of human thoughts".

The Rich Heritage of Jammu and Kashmir Studies in Art, Architecture, History and Culture of the Region By Prof. Somnath Wakhlu