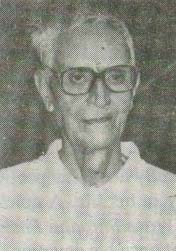 Born at Drabiyar, Srinagar, in 1914, Shri Jankinath Kaul 'Kamal' was well known as an accomplished scholar through his writings in the fields of Kashmir Shaivism and Vedanta, which have received countrywide recognition. He attained fame and popularity as a versatile and talented writer and earned for himself a position of special esteem because of his qualities of dedication and selfless service.

All his life, he had been a devoted teacher and scholar, content with his modest earnings, and very proficient in his work. An octogenarian who our community has reason to be proud of, he remained mostly busy in reading and writing, when he was free from domestic and social preoccupations (excluding the hours he devoted to his daily meditation). Of course, he took special delight in delivering discourses on religious and literary topics at his residence or at select places - for which he spared several hours a week in spite of his busy schedule.

His scholarly writings in English, Hindi, Sanskrit and Kashmiri, published in the form of books and articles (that have appeared in standard journals, including the Prabuddha Bharata, Kalyan, Malini and Koshur Samachar), have been favourably reviewed and commented upon by critics and scholars of note. In recognition of his valuable contribution to Hindi language and literature, he received a prestigious award from the Hindi Sansthan, U.P. Government, on Hindi Divas, on September 14, 1992, in Lucknow. On August 15, 1996, on Independence Day, a still more prestigious award - Certificate of Honour - was conferred on him which was presented to him by the President at Rashtrapati Bhawan on June 9,1997, in recognition of his significant contribution to Sanskrit studies.

Koshur Samachar had the privilege of printing a picture of the investiture ceremony in colour in its issue of 1997. Shri 'Kamal' attended the function which afforded him an excellent opportunity to interact with the other fellow-awardees (all eminent scholars of Sanskrit, Persian and Arabic).

Jankinath Ji had to come up the hard way to make his mark as a man of achievement. His mother passed away when he was just 7-8 years old; his father remarried but died when his son had barely attained the age of 13. Facing hardships as an orphan, Shri Kaul lacked the means that would have facilitated his education at school. Thus he could not continue his studies beyond matriculation. After a few years of service in Women's Welfare Trust, Srinagar, he joined the teaching profession at the age of 30 and taught at the D.A.V. Institute, Srinagar, for 30 years until he retired as a senior lecturer in 1974. In view of his competence and meritorious services, the Institute re-employed him for another five years until 1979. It was during his teaching career itself that he Improved his educational qualifications - passed Prabhakar and got his B.A. and B.T. degrees, followed by an M.A. in Sanskrit from the University of Jammu and Kashmir. He worked as Research Officer at Sri Parmanand Research Institute, Srinagar, for 4 years (from 1981 to 1985). Since 1986, he held the post of Editor, Cultural Desk/ Research Officer, Sri Ramakrishna Ashram, Shivalaya, Karan Nagar, Srinagar, and after his displacement from the Valley in 1989, he had been discharging these functions at Jammu.

A deep interest in spirituality, rooted in his constant quest for truth, had been the main motivation behind Shri Kaul's life-long study of holy scriptures. His proficiency in Sanskrit provided further impetus to his sustained study of Shaiva, Shakta and Pedantic texts in original. Right from his boyhood days, he had the marks of a true Jigyasu and Bhakta in one. No wonder, therefore, that he had read the works of Swami Ram Tirth in English and lJrdu and also those of Swami Vivekanand with passionate zeal when he was a young man in his twenties. He had in him the makings of a poet; it was in his early youth that he started composing Iyrics in Kashmiri and Hindi.

His intense love for the Divine brought him into contact first with a well-known scholar and saint, Shri Nilakanth. It was under his guidance that he studied Bhagwad Gita in depth along with the commentaries of Shankaracharya and Shankaranand. Shri Nilakanth, on his retirement from government service, lived in ShivanandAshram, Rishikesh, from 1957 onwards. In 1963, he took sanyasa and came to he called Swami Nilakanthanand Saraswati. He left his mortal coil in 1988. Before shifting to Rishikesh, he recommended Kamal Ji to the illustrious sahit-scholar, Swami Laxman Joo, known in the country and abroad for his mastery of the Shaiva texts and his attainments in spirituality.

During his long association with Swami Laxman Joo, he wrote several eulogistic and devotional lyrics on hen in Sanskrit, English and Kashmiri. Atter the Swami ji attained mahasamadhi, he wrote several biograpilical articles on him which appeared in various journals. In all humility, Kamal Ji has acknowledged his debt to the great saint of Ishaber as to how he profited academically and spiritually from his discourses on Kashmir Shaivism and his explication of the Shaiva texts. Some of the valuable lectures of Swami ji have heen recorded and rendered into English by him with great care and editorial skill. Likewise, some discourses given in Kashmiri by Swami Laxman Joo on the practice of meditation and Pranayama have been reproduced by him in the Nagri script in a presentable form. During his association with the Swamiji, he also came into contact with a householder saint, Pandit Satram, who lived at Ishaber close to Swamiji's Ashram. From this saint, he learned Vidyaranya's Panchdasi, which he found very useful.

A study of the corpus of Shri Kamal's works reveals three things ahout him - his capacity for rigorous research, his wide-ranging scholarship and his writing skill as a translator, commentator and creative artist. His achievement as a writer is stupendous, considering the hardships he had to face as a man of modest means.

I would first like to talk briefly about his poetic sensibility that flowered early in his life. A quick look at his book of Kashmiri lyrics Shradha Posh, brought out in 1942, reveals at once his devotional intensity, his deep mental involvement with the Transcendent, his spiritual aspiration as also his dispassion and his practical grasp of the technique of meditation as recommended in our sastras. The very titles of some of the poems are striking and significant - Murli Nad, Sahana Panai, Viji Vav, Berang Nundabon, Samvit Panchadasi, Turya Tirth, etc. The preacher's tone is marked in the poem Grahasthiyas Updesh that exhorts one to combine purity with a satisfactory performance of worldly obligations to maintain the delicate balance between Parmarth and our social conduct. His diction is simple and lucid and his manner straightforward. The diction is usually a mix of Kashmiri words in common use and the appropriate terms derived from the sacred texts. As an illustration, I give below my translation of the first 10 lines of the poem Siva Sankar Sambu:

Shri Kamal's lyrical genius as a Hindi poet blossomed forth in the volume titled, Viksipt Vina. This work has been specially mentioned as the author's valuable contribution to Hindi poetry in the citation that accompained the award conferred on him in 1992. The poem Main strikes the keynote; here is my translation of the first stanza:

I'm the melancholy note From a Vina with broken strings; I am the wailing song That has burst forth From the anguished heart Of a helpless woman!

The various lyrics strung together in the volume reveal the depth and intensity of the author's feelings and the loftiness of his aspirations. The reader at once feels that a 'lark is singing' in the poet's breast. At the same time, the poems show how sensitive he is to the pain and suffering that life brings in its train.

From the long list of Shri Kamal's publications, I would select three titles for special mention:

i) Bhavaninamasahastrastutih, which I consider his magnum opus. It is a translation from Sanskrit into English of the hymn containing a thousand names of Bhavani, accompanied by an elaborate commentary, (ii) Siva-Sutra-Vimarsha, edited with a critical commentary in Hindi, and (iii) Panchastavi A Pentad of Hymns to Bhavani. The Sanskrit hymns are translated into English followed each by an elaborate and illuminative commentary. Three favourable reviews on the first title (including one by the present writer) have appeared in Vedanta Kesri, Indian Book Chronicle, Koshur Samachar and Prabuddha Bharata. The book has been in great demand and it has been reprinted. His achievement as translator, annotator and commentator is impressive and his perceptive and critical comments in Hindi on the Siva Sutras are thoughtful and lucid. I find this work in no way less useful and, in some respects, even finer than Jaidev's notes in his English commentary on the text. The third title is a fine work, packed with insightful comments on the hymns matched by perceptive allusions to the relevant materials that illuminate the esoteric meanings of the hymns. The book has been very well received by readers all over the country. Swami Ranganathananda of Ramakrishna Math, Hyderabad, was all praise for this work. He mentioned the book to me when I met him in February 1997 at Hyderabad.

In sum, Shri Jankinath Kaul Kamal was remarkable as a scholar and writer. Tall, slim and pleasant-looking, saintly and erudite, always neatly dressed, he exuded the culture and warmth that evoked admiration from one and all. Those who were close to him and listened to his illuminating discourses found his company invaluable. As a scholar, he was every inch professional.