The Sanskritic Shastras have survived in India as a part of the Vedic ritualistic culture. The Vedic ritualism has been a text-based culture. In the development of this ritual-culture a variety of sciences emerged as a part of it thus making it richer. These sciences were a part of a living tradition survived by the respective experts called Pandits. After learning and disseminating this traditional knowledge it was taught to the consecutive generations. Till the later half of the nineteenth century the same living tradition was practiced in the Kashmir valley. The twentieth century saw a sudden halt of this tradition. In the present Sanskrit legacy of Kashmir I name only two such traditional luminaries, one being Pandit Baljinath Pandit and another, his taught Pandit Nilkanth Gurtoo. Had I written these lines just a week back I was to mention Pandit Dinanath Yaksh as well. But with the sad demise of Pandit Dinanath Yaksha on 4 October 2004 a whole gamut of the Kashmirian legacy of Sanskrit Shastric systems came to an end. 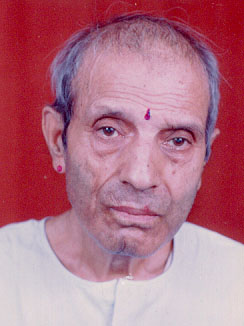 Pandit Dinanath Yaksha was born in Srinagar (Kashmir) on 12 June 1921. He completed his Shastri degree from the University of Panjab, Lahore. Born in an orthodox Kashmiri Pandit family he was in active contacts with the major Sanskrit pandits of his time. During his childhood he attended the Government Pathshalas for learning different systems. He learnt someKarmakanda (practice of ritualistic rites) and Grammar from Pandit Ramjoo Kokiloo. He also read some texts of Grammar with Pandit Raghunath Kokiloo. The legendry figure in the Karmakanda and Jyotish of Kashmir Pandit Keshav Bhatt Jyotshi taught him astrology. Afterwards he polished his knowledge of Sanskrit language and Grammar as he studied some very advanced texts of Sanskrit grammatical tradition with Pandit Parshuram Shastri and Pandit Kakaram Shastri of Jammu. While pursuing his shastri course he learntNyaya (Logic) and Kavya Shastra (Poetics) from Pandit Ananda Kak and Pandit Nathram Shastri.

The assimilation of this great knowledge gained from his teachers would have been futile had he not pondered over whatever he learnt. His docile efforts for learning together with his self-study served as a befitting testimony to his scholarship. While being in his teens Panditji had an amazing hold over the Sanskrit language as a result of which he was able to tackle even the most difficult text himself.

His Career and Scholarship

In 1945 Panditji joined the Jammu and Kashmir Research and Publication Department, Srinagar as a copyist and retired from the same Department as the Head-Pandit in 1976. Here he was paid very less but he was surely happy with the job of his interest. When he joined the Research Department, it had a collection of some 213 manuscripts and Panditji raised this collection to 2500 manuscripts. These manuscripts are preserved in the Sanskrit Manuscript Section, Iqbal Library, University of Kashmir in some 5000 volumes. In addition to this he established a section on Kashmir School of Art and Paintings, which contains some 500 rare Kashmiri paintings and miniatures. During his stay in the Department he edited a number of texts, monographs and research journals. Among the texts he edited the major ones include Prabhavatipradyumna (A Sanskrit play by Ramakrishna Suri),Sivasutravivarana of Sukhananda Zadoo, Cittapradipa of Vasudeva (A Vedantic work), Tarkakutuhalam (Mandaramanjari - of Visvesvara Suri),Pancastavi Vol- I and II with the commentary of Pandit Harbhatta Sastri,Svatantryadipika of Mansaram Monga, Sivasutravimarsini of Kshemaraja,Bhavachudamani of Vidyakantha (A Tantric cum literary work),Durbhiksitadarudaya of Isvara Kaula (The famine history of Kashmir which broke out in 1932). Besides this he co-edited many research studies and translated works. He also wrote a number of research articles in Sanskrit, Hindi and English. He compiled and edited the Catalogue of the Sanskrit Manuscripts present in the Jammu and Kashmir Research Library for the first time.

Later Panditji was associated with the Center for Central Asian Studies, University of Kashmir as a Research Associate for five years. Thereafter he served as a Research Associate in the Jammu and Kashmir Archaeological Department, Government of India, Srinagar for a year. The Rashtriya Sanskrit Sansthan, Government of India for which he worked profusely for next four years, awarded him a fellowship of Sastrachudamani.

In 1990, like all other Kashmirir Pandits who left the Kashmir valley out of terror prevailed by the Muslim fundamentalists, Panditji also had to flee for his life leaving behind his richest and remarkable private library in Kashmir consisting of 9000 printed volumes and 500 rare Sanskrit Manuscripts. In his collection of 500 manuscripts 300 were the only available original Sanskrit texts and commentaries.

His Specialization and Style

Panditji was very through in the Paninian Grammar and the grammatical traditions of Kashmir. He was as good in Katantra, Chandra and Kalapasystems of grammar (those were prevalent in Kashmir) as he was in Paninian system. His through knowledge of Kashmir's history, geography, culture, philosophy et al was his special characteristic. I remember him quoting effortlessly from the Rajatarangini and the Nilamat Purana. He had studied the Mahabhasya of Patanjali very assiduously. While teaching me the Sanskrit Grammar I recall him quoting profusely from the Siddhantakaumudiand the Mahabhasya.

Panditji's style in his Sanskrit writings matches greatly with that of the classical Sanskrit writers like Banabhatta, Sriharsa and Bhavabhuti. I remember the first time I studied his Sanskrit writing. I was unable to make out what he had written. His in-depth understanding of Sanskrit grammar made his writings more profound. He used to catch even the veteran grammarians in his verbal jugglery. He used to say that this style he had learnt from a Kashmirian poet Sahib Kaula.

Panditji had no formal education in English language and literature. He once read a Sanskrit translation of Macbeth in a library and was deeply impressed with Shakespeare. He got so tempted towards English Literature that he bought a set of Complete works of Shakespeare in Sanskrit. Thereafter he got Shakespeare's works in English and tried to understand them in original. He also got a complete set of the works in Sanskrit literature translated into English by Moreshwar Ramchandra Kale and tried to understand English language through Sanskrit. Thus he was able to learn English through Sanskrit. Later he used to write his research papers in very lucid and chaste English. This reveals his laborious pursuits for learning.

Although being an orthodox traditional Pandit he had amazingly realistic and exquisitely scientific approach towards traditional systems in Sanskrit. He used to analyze and appreciate all the branches of knowledge quite methodically. His sense of logic and literary criticism and the matchless historical approach were his tools to penetrate deep into any subject of his choice. He never studied any text of Kashmir Saivism traditionally but his understanding of Saivite and Tantric texts that he gained solely through self-study was amazingly remarkable.

His Association with Research Students

Panditji was always a major center of attraction for Researchers. No research thesis on Kashmir was considered to have gained authenticity unless it had passed through the hands of Panditji. He guided at least some hundreds of Research Scholars from Indian and abroad. Prof. Raffaele Torella (Chair of Sanskrit, University of Rome) who worked with Panditji for many years in Kashmir once mentioned to me, "Panditji is very thorough in the grammatical traditions of Kashmir. Learn from him as much as possible." Prof. Torella's teacher Prof. Ranerio Gnoli who translated The Tantraloka of Abhinavagupta into Italian had a long association with Panditji. Prof Bettina Baumer of Vienna University regarded him as Modern Panini in Kashmir. Prof Navjivan Rastogi (Retd. Professor of Sanskrit, University of Lucknow) has duly acknowledged Panditji's help and guidance in his doctoral dissertation on Krama System of Kashmir Saivism. Prof A.K.Warder, the famous author ofIndian Kavya Literature worked with Panditji for many years and acknowledged his genius.

Panditji was undoubtedly a towering figure of traditional Sanskrit learning in Kashmir. But one would never miss to mention his humble and loving nature. His sincerity at heart, self-conceited humility, gentle nature and worthy caliber were the landmarks of his personality. In him Kashmir has lost the biggest diamond carved in the necklace of Mother Goddess Sarada. In him I have lost my dear teacher.