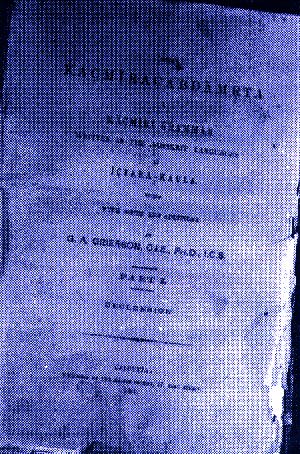 [ Pandit Ishwar Kaul assured for himself an esteemed place in the galaxy of Kashmiri scholars by giving Kashmiri its first grammar - the 'Kashmir Shabdamrita'. Written in Sanskrit after the manner of the great Sanskrit grammarian Panini, Ishwar Kaul's treatise on Kashmiri grammatical forms bears testimony to his profound study of the language. He also pioneered lexico- graphical work on Kashmiri, though death prevented him from completing his 'Kashmiri and Sanskrit Kosha'. While presenting here a profile of the great scholar, we regret we have not been able to procure his photograph despite our best efforts. We have, however, tried to compensate for it by publishing a photograph of the front cover of his monumental work the 'Kashmir Shabdamrita.' ]

The 19th century saw the Kashmiri Pandit community throw up giants in the field of learning and letters. Contacts with the West set into motion processes that led to an intellectual ferment in Kashmir, inspiring the Pandits to rediscover and reinterpret their past and undertake new and challenging scholastic ventures mostly in collaboration with Western scholars, but also independently. Among the titans of the age who chartered an independent course ror themselves was Pandit Ishwar Kaul (IK) of Srinagar.

Born on 4th July, 1833 in a family deeply steeped in Sanskrit lore, IK lost his father, Pandit Ganesh Kaul, when he was just three years old. He first studied under Pandit Tikkaram Razdan, who was one of the most renowned Sanskrit Pandits of that time. Later IK learned from Pandit Daya Krishna Jyotishi of Benares who had come to Jammu in the service ol Maharaja Ranbir Singh of Jammu and Kashmir. Equally proficient in Sanskrit and Persian, IK was also fairly conversant with Arabic. These credentials were enough for the Maharaja to offer him the assignment in 1861 of translating Persian and Arabic works in his library into Sanskrit and 'Bhasha' (Hindi). Ten years later, in 1871, IK was appointed the Head Teacher at the Sanskrit Pathshala opened by Maharaja Ranbir Singh in Srinagar.

Kashmiri Pandits are known to have have a penchant for producing works of grammar, as is proved by the several grammatical treatise they authored on Sanskrit. The earliest grammar of Tibetan was composed by a Kashmiri Pandit, and so was the first Gujrati grammar. IK continued the tradition by writing the first grammar of the Kashmiri language, a brilliant work about which George Grierson wrote: "It is an excellent work and might have been composed by the Hemachandra himself." Modeled on the great Panini's 'Ashtadhyayi' and written in Sanskrit, IK's 'Kashmir Shabdamrita' reveals his perfect knowledge of the linguistic structure of Kashmiri. Edited by Grierson with "additions and notes", the work was published by the Asiatic Society in 1897. IK, however, is said to have composed it in 1875, or, perhaps in 1874, as his son Anand Kaul believed, and revised and improved in 1879.

IK was also a pioneer lexicographer in Kashmiri, even though his Kashmiri- Sanskrit Kosha remained half-complete due to his death. Grierson compiled his four volume dictionary of the Kashmiri language from the materials from IK's fragmentary Kosha, compiling it with the assistance of Pandit Mukundram Shastri and Prof. Nityanand Shastri and publishing it in 1932. Ishwar Kaul "never lived to complete, much less revise, his Kosha", writes Grierson in the preface to his dictionary.

It goes to the credit of IK that he was the first to use the Devanagri script for transcribing Kashmiri words both in his grammar and his dictionary. He expressed typical Kashmiri vowel sounds by using diacritic marks, mainly the horizontal bar and the 'halanta'. Grierson, and later Master Zinda Kaul and Prof. S. K. Toshkhani used the Devanagari characters for Kashmiri with a more elaborate system of diacritical notation.

In the year 1881, IK was made Director of Translation Department of the Jammu and Kashmir state. The department, set by Ranbir Singh, was wound up in 1884 after the Maharaja died. His successor, Maharaja Pratap Singh appointed IK as Head Jyotishi or Chief Astrologer at his court, a post that he held until his death on 28th August, 1893.

IK's genius was best summed up by Sir Aurel Stein when he described him as the "Panini of Kashmir".