Shri Tara Chand of Gairu (Noorpur Village), popularly known as Kashyap Bandhu and Bulbul-e-Kashmir, should have been given the same position among social reformers in Kashmir as is bestowed to Raja Ram Mohan Roy of Bengal. He is better known as a political leader rather than a social reformer. His efforts to revolutionize the thinking of Kashmiri Pandits - change their social structure and social disabilities, brought about a tremendous change in the community, the impact of which is visible even today in the dress of our women folk i.e. 'saree' and in the fast growing education of our women.

Born in March 1899 to Thakur Bhat in Gairu (Noorpur village), he got his 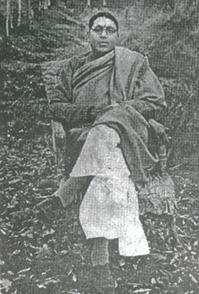 education up to primary standard in the local primary school and then in Srinagar up to entrance examination. After passing his entrance examination, a quest for job started and after a great struggle he got a job of Shajrakash in Revenue department. But after some time he left the job and went to Lahore. These were the days when Arya Samaj, Brahmo Samaj and other such organisations were advocating social reforms. He came under the influence of Arya Samaj and joined Vrjanand Ashram in Lahore. He became a total vegetarian and never touched meat etc. Vishwa Bandhu was the Principal of the Ashram. Vishwa Bandhu observed the keen interest of Tara Chand in public service and social reforms and advised him to serve Kashmir. It was he who named him as Kashyap Bandhu. Kashyap Bandhu became the editor of Arya Gazette in Lahore. While in Lahore, he saw the miserable condition of Kashmiri labour who used to migrate during winter months to earn their livelihood. He organised them and started Kashmiri Mazdoor Board of which he became the Secretary. He came into contact with revolutionaries and joined Bhagat Singh's party. He was arrested in Sanders' case but was released.

Kashyap Bandhu was always keen to serve Kashmir and while out of the State, he kept himself abreast of the conditions in the State and particularly about the conditions of his community - Kashmiri Pandits. It was during these years i.e. beginning of 1930-31 when the Muslim Conference came into existence. In 1931 when the leaders of Muslim Conference were in jail, a procession in connection with the demand for their release was taken out in the city of Srinagar. It became unruly and on their way the processionists looted the houses and shops of Kashmiri Pandits. Some of them were killed. Though the killing and looting stopped in no time, the scars remained for a long time. It was after this happening that Kashyap Bandhu returned to Kashmir. He was already familiar with the condition of the State particularly the Kashmiri Pandits. After his return to Kashmir - Shri Prem Nath Bazaz, Shri Shiv Narain Fotedar, Shri Jia Lal Kilam and Bandhuji organised "Yuvak Sabha" with its central office at Sheetal Nath. It was from this place that Bandhuji started his political and social reform activities. He realised that to ameliorate the condition of the community the social evils in the community should be removed and reforms brought in. During the beginning of the thirties he started his programme of Social Reforms. The Reforms which were taken up for implementation were:

In those days widows were not allowed to remarry as the society did not approve of it. Young widows had to suffer for whole life and depend for their existence on the in-laws or own parents. Kashyap Bandhu started the movement, propagated for it along with other workers. Most of the workers who worked with him volunteered and married widows. That was the example they put forth for the community. In those years many widows got remarried.

2) Wasteful expenditure and other customs:

Most of the expenditure incurred during the marriages or other festivals used to be wasteful. The manner in which feasts were given for days together on such occasions and food stuffs and other things wasted was unbearable. To stop all this, Bandhuji and his colleagues started picketing and used to sit on dharnas wherever such feasts were organised. He requested the people to limit the number of Baratis and stop wasting the money and the food stuff. He also advocated limiting the number of preparations on such occasions and refrain from giving huge dowries. Those days it had a salutary effect on the community.

The greatest contribution of Kashyap Bandhu is the spread of education among the girls. It was during that time that Girls Schools such as Vasanta School came into existence. We owe it to him that our women folk have taken to education and are not lagging behind in any field today.

Weekly gatherings used to be organised at Hari Parbat where the community people used to gather in large numbers. Yajnas (Havans) were also performed. This was done to imbibe unity and brotherhood among Pandit Community.

Kashyap Bandhu started collecting contributions and donations both in kind and cash to help widows. His volunteers used to visit each and every house to collect rice and other things just to give solace to the economically and socially backward persons. He started 'Silai Kendra' to give training to the needy widows so that they could sustain themselves.

6) From Pheran to Saree:

Today we see our womenfolk in sarees and salwar kameez. During the period of early thirties, sarees and salwar kurtas were non-existent. Pheran was the common dress for our women without any under garment beneath it. This dress was responsible for lethargy and laziness. Bandhuji requested the women folk to change the dress and start wearing sarees and that too khadi sarees. There was resistance initially but he and his volunteers started visiting each and every house and requested the women to change the dress. His efforts bore results and today saree and salwar kameez have become the normal dress of our women folk.

To educate the people on these social reforms, he used the media to a great

extent. He published many of his ideas through articles in the Daily Martand (of which he was the first editor), "Kesari" and "Desh" etc.

But alas! today we have not only forgotten the man but we have betrayed him. He wanted us to shun dowry system - wasteful expenditure - show off on festivals, particularly on the occasions of marriages - we have not adhered to his teachings. Our demand for dowry has grown to awful proportions; the expenditure on marriages has multiplied, and our marriage festivities continue for days together. Many things have been added to our menu- Chicken, which once was unheard of in our community, has become one of the varieties which is served on the receptions and other occasions. 'Nena Batta', 'Hyot Dyot', Gharachun etc. have become our culture. Khadi, which Bandhuji wanted our women folk to use, has given place to Banarasi and other costly silken sarees. This is how we have betrayed the man who gave us self confidence and self respect, wanted our emancipation and development. We can still pay him our respects and shradhanjali by following his ideas and teachings.

Let us observe his birthday as the day of Social Reforms every year and organise lectures, seminars etc. on this occasion.

[ The intensity of the opposition faced by Bandhu ji will be gauged by this example: