"The Puff That Kindled The Divine Spark In Him" 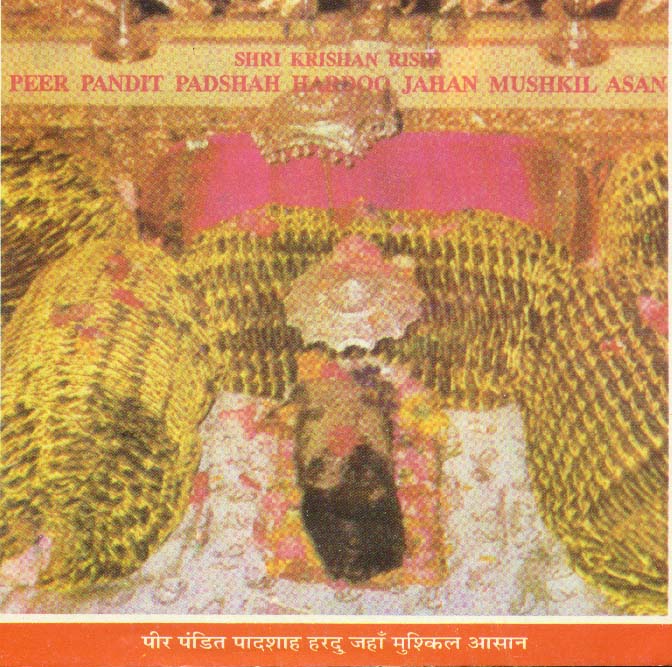 Reshi Pir Pandit was one of the greatest saints of Kashmir of the 17th Century A.D. He was a Karmyogin type of a Saint who helped people both in spiritual and temporal pursuits and he became famous as "PIR PANDlT PADSHAH HARDU JAHAN MUSHKIL ASAN" i.e. Emperor of two worlds and answer to difficulties of all kinds.

His father was Pandit Gobind Kaul resident of Batayar Mohallah Ali Kadal Srinagar (Kashmir). He was a well-to-do man but could not get a girl to marry. What worried him was that he was advancing in age. However, he ultimately succeeded in marrying a girl in Gushi Village of Handwara Tehsil. When the bride-groom came for the marriage ceremony to Ghoshi Village, his mother-in-law noticing some grey hair on her son-in-law's head fell into a swoon. After the wedding, the mother prayed at a nearby "Sacred spring" for her daughter. One day while praying earnestly at the spring, she heard a voice telling her "Oh old lady-go to your house and get your daughter to this spring. A bunch of flowers will come out of the spring let your daughter smell this bunch of flowers and your ambition would be fulfiled and your daughter will get a holy son". This was done by the lady and Pir Sahib's mother smelt the coloured bunch of flowers. When the time of delivery was approaching she left her parents house to go back to her husband. While travelling in a boat to Srinagar, she delivered a male child in the boat itself at Sopore in the year 1637 A.D. This boy was given Reshi as his name. A temple has been constructed at this spot and is known as "Resh Sund Mandar". Pandit Gobind Koul was extremely happy when his wife and child reached his home in Srinagar. When Reshi was 7 years old he was married and his father died soon after. By the time he attained the age of 12 years he became indifferent to wordly affairs and devoted his entire time to Sadhana in temples, visiting saints and searching for a Guru. With this predominant idea in his mind, he started circumambulation of Shri Sharika Bhagwati Shrine situated on a hillock in the city of Srinagar during nights for 40 days crawling all the way on his knees (a distance of about 3 miles). On the 40th day when he was in Deviangan (an open space below the hill) Godess Sharika Bhagwati gave him Her Darshana and enquired of him as to what he wanted. He prostrated himself before Her and implored Her for being granted the boon of a Guru. The Devi ordained that the first man he would come across henceforth would be his Guru. After he left Deviangan and reached the place known as Hari on the northern side of the Hillock, he encountered a "MASTANA" saint sitting on a big stone and bowed to him, but he - the saint bolted away without saying a word leaving Reshi Pir far behind. The Mastana saint reached Reshi Pir's house before he himself reached there, asked Reshi's mother to give him Reshi's Hokka and smoking a puff or two told her to give the Chellum to Reshi for smoking after he returns home, and left the house. As soon as Reshi reached his home, his mother told him that a Mastana had come, who asked for his Hokka, smoked a puff and said the "Chellem" should be given to him (Reshi) for smoking. Reshi had a puff. The second puff kindled the Divine spark in him, his Jana Nitra opened and he became a God-intoxicated Trikaldarsh. This "Mastana" saint who initiated him was Pandit Krishna Kar. After his initiation he continued his intense Sadhana for 14 l/2 years. It is said that for a bath he would throw live red hot charcoal on his shoulders and body daily, for a number of years. After this period he became famous as "Pir PANDIT PADSHAH" as he helped many people out of their worldly difficulties. This news reached Aurangzeb who disliked his being called king "PADSHAH" and sent his messenger to Srinagar to arrest him and get him to Delhi. As the massenger met Pir Sahib, he made arrangements for his food. etc. and told him that he would accompany him the next morning to meet the king. By his miraculous powers he went to Delhi during night and enquired of Aurangzeb what he wanted of him. On seeing Reshi Pir, Aurangzaib trembled, became convinced of his spiritual prowess and greatness and wrote to Saif Khan Governor of Kashmir not only to cancel the orders of his arrest but also to keep a Jagir in his name in Devsar Village. Pir Pandit had fixed 14 pies as Niaz or offering to him. This practice is continuing even to this day among Kashmiri Hindus.

A contemporary of Pir Sahib, Mulla Ahmad Badkhshani used to have discussions with him on spiritual topics. Dara Shikoh was his (Mulla Sahib's) pupil. It is believed that he "Reshi Pir'' influenced Mulla Sahib greatly with Vedantic thought and he induced his pupil Dara Shikoh to translate it in Persian and named the book "SAIR-I-AKBAR".

The Festival Of Lucknow Pandits

Saint Reshi Peer was born to Pandit Govind Joo Khashu of Batyar, Ali Kadal, Srinagar. He lived (1637-1697) during the rule of Mughals. His popularity as a saint was unrivalled. When many Kashmiri Pandit families migrated to Lucknow during 18th Century, they continued to observe shradh (which incidentally also happens to be the birthday of the saint) of Reshi Peer. This used to be called 'Rishi Pir Ka Jagâ€™. A detailed description of this celebration is available in KashmirDarpan, May 1903, p.5 (Pran Nath "Murasla Kashmir"), KashmirDarpan, August 1903 (Tajkira Quami by Bishamber Nath Mushran; p3) and Bahar-i-Gulshan-i-Kashmir, Vol. II pp 418-419).

This Jag was held in the Kashmiri Mohalla of Lucknow. On this occasion, members of the biradari assembled in a bagh or park in the Mohulla, the Bakshi Bhola Nath Ka Bagh, owned by a Kashmiri Pandit family of the Mohalla. Funds were collected from biradari members. A Havan was performed and in the evening there used to be a feast. From about 9 o'clock music and dancing would start and lasted till late in the night. Subsequently, this music and dancing part was extended to one week.

In 1906, the noted Kashmiri Pandit poet of Lucknow, Pt. Brij Narain Chakbast acted feverishly to end the annual Yagna of Rishi Pir. Due to certain innovations that had developed in the celebration of this festival, Chakbast pleaded with his biradariÂ  members to end the fair and succeeded in his efforts. Soon after, he met with a tragedy. His wife gave birth to a male child and died thereafter. The baby survived for a few days only.