At another home in another town in Kerala, cruel fate had struck. The father of Lt. Colonel Vishwanathan, another officer to die in the Kargil operation, put on a brave face, despite his grief. "We grieve the loss of our son. But we are also proud he has dedicated his life to the nation," said V Ramakrishnan, 60.

Anjali, Lt Colonel Vishwanathan's child, was seated on his lap with a distant look in her eyes. It is difficult to tell if the girl has fully understood what has happened though she is certain that something is amiss. Lt Colonel Vishwanathan, 39, should have been at home if the Kargil operation had not taken place. He had planned to reach Kochi on June 4 to take his wife and two children back to his base on June 21. Lt Colonel Vishwanathan, who did his schooling at Kochi, was commissioned in 1981 after completing his training at the National Defence Academy, Khadakvasla, and the IMA, Dehradun.

He had served with the Indian PeaceKeeping Force in Sri Lanka and later with the UN Peacekeeping Force in Angola. A classmate, Captain Srikumar said Viswanathan was a ''very dedicated person prepared to take any risk.'' The Kerala government has sanctioned Rs 500,000 each to the families of the two officers. Chief Minister E K Nayanar said one member each from the two families would be given a government job. 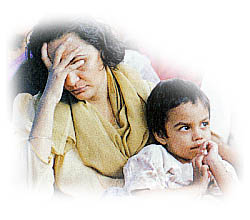 Earlier, when the body arrived from New Delhi by an Indian Airlines flight, Ramakrishnan received it on behalf of the state government, representatives of the army and navy and the district authorities ceremoniously. The body was kept for an hour at the statue junction at Thripunithura to enable the public to pay homage before being taken to his village.

MISSION: Viswanathan went up the heights to recover the bodies of three of his men. He captured three bunkers but was shot in the groin and thigh. He died while being evacuated.

The letter was to the point. "I am proceeding to an unidentified destination. It could be dangerous." It was written by Lt-Colonel R. Viswanathan to his wife Jalaja on June 2 but never posted. It still reached her, on June 6 -- along with the bullet-riddled body of her husband.

Viswanathan was on a leader's mission. Three of his men lay dead on the windswept slopes of the Tololing ridge and he had to get them down. It was the least a gallant officer could do. Leading his troops on the night of June 2, Viswanathan crawled up the ridge on his stomach under heavy enemy fire. It was the same old story: the intruders were up on the top, well ensconced in bunkers with their LMGs blazing in the still night. He captured three enemy bunkers before bullet injuries on the thigh and groin stopped him. First aid didn't help and as his troops were trying to get Viswanathan back to Drass, he died on the way.

The phone rang on the afternoon of June 3 at the house of Viswanathan's father V. Ramakrishnan in Kochi. "I was told that my son was no more," recalls Ramakrishnan. The news changed their lives. Jalaja till today declines to meet the hundreds of well-wishers who stream in to offer condolences. Ramakrishnan on the other hand gives the visitors the details of his son's life -- helped by Viswanathan's daughter Anjali. "It is Angola periyappa," she says when Ramakrishnan tries to recall the place other than Rwanda where Viswanathan had worked as part of the UN Peace Keeping Mission. The family says it is overwhelmed by community support. The local school has offered Viswanathan's children admission, the state Government has promised a memorial and Rs 5 lakh, and the army museum at Jabalpur wants to display his uniform. As Ramakrishnan lovingly takes out a uniform his wife Kamal asks if this was the one he was wearing when he died. "No, no. How many times have I told you? That uniform is riddled with bullet holes. This is another set," he says proudly.