MISSION: Adhikari was leading the central arm of three 10-man teams trying to capture a bunker at 16,000 ft. He died in the bloody assault but the bunker was won.Â

It was an unlikely place for a husband to read a letter from his wife of 10 months. It was May 14 and the inky blackness of night was falling on the icy expanse of the Himalayas. On a rocky ride at 16,000 ft, Major Rajesh Adhikari had just received a letter from his wife Kiran. With a map in one hand, an AK-47 assault rifle in the other and a mission to lead an assault on a vital position called the Tololing heights, Adhikari stuffed the letter in his pocket. "He said, 'I want to read it in peace tomorrow after the operation is over'," recalls a fellow officer.Â  Adhikari never got the chance. That night he and a 10-man Grenadiers team began climbing towards their fortified objective with picks and axes. Sniper fire killed a JCO and when it dropped to six below freezing, the mission was called off. The next day, three teams of 10 men began a new assault. Adhikari led the central charge, three metres ahead of his men. Hit on the chest, he grimly drove forward. The bunker fell, but Adhikari lay dead 20 m short of his objective. His body was finally recovered last week and sent back to his family in Nainital.Â 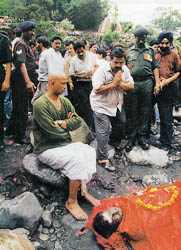 In the hills of Garhwal, where they say every third home is a soldier's home, Nainital joined the family in the long wait, his mother hoping if there was no body, maybe her son wasn't dead, maybe he would one day walk in, that eternal smile on his face. She had seen it all through his school, St Joseph's, Nainital, all through his college years and on his visits home, while recounting his river rafting exploits, while playing old Hindi favourites on his old guitar. In the end she accepted reality -- and bade him farewell on his last journey to a pyre beside the Gola river.Â

Major R S Adhikari's sister Mamta, stands in silence after laying a wreath on the mortal remains of her brother. Major Adhikari made the supreme sacrifice in Tololing capture operation in Kargil. PTI photo

The Mechanized Infantry's Major Rajesh Singh Adhikari, the second army officer to die in the operations against infiltrators, had caused heavy casualties to the intruders and forced them to withdraw before succumbing to injuries in Drass sector, the army said today.Â

It said the officer, who was presently with the Grenadiers, had been given the task of clearing a height which he carried out after making the supreme sacrifice.Â

Maj Adhikari, 29, belonged to Tallital in Nainital district of Uttar Pradesh and was commissioned as an officer in 1993. Married last year to Kiran Negi, he was going to celebrate his first wedding anniversary on June 9.Â