A third generation officer, Maj Manoj Talwar, left the more lucrative option of becoming an army doctor when he chose to join the National Defence Academy. His father, Capt (Retd) P L Talwar, is sad but proud that his son fought for the motherland.

The body of Major Manoj Talwar of 3, Mahar Regiment was cremated here in Surajkund cremation ground with full military honour.Â

Thousands of people turned up for the Majoâ€™s who was killed while fighting Pakistani infiltrators in Drass. The cremation ground was packed with the local people, politicians, businessmen, army, and officials who payed tributes to the brave martyr.Â

Earlier, the last journey of Major Manoj started from his residence situated at Defence Colony at 10.30 a.m.and took nearly four hours to cover a distance of 9 kilometers between his house and the cremation ground. The procession passed through Mawana road. Civil Lines, Eves crossing and Hashimpura area before reaching Surajkund. People lined up on the roadsides to pay their respects. Hundreds of Tri-colours fluttering on both sides of the roads to salute the great hero.Â

Markets in the area remained closed on the call of the Sanyukt Vyapar Mandal. Two cinema halls â€” Meghdoot and Gulmarg also suspended their noon shows so that people could join the procession.Â 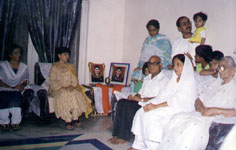