There was pride in her salute and sorrow in her eyes as Capt Jayshree Gupta bid a final farewell to her slain husband Maj Vivek Gupta, the hero of the first major victory achieved by the Indian forces in Kargil.Â

Maj Gupta and six others from his team captured the Pt 4950 peak at Tuloling before they were killed in fierce combat.Â

The bodies of the soldiers from the 2nd Rajputana Rifles, who were killed on the icy heights on the intervening night of June 12 and 13, were flown to Delhi and accorded a ceremonial farewell.Â

Among those to bid farewell were several retired officers from the same unit including Lt Gen O P Kaushik, former Colonel of the regiment. â€œVivek was an extremely endearing young man. Exceptionally tall and handsome, he had a certain dynamism. He has done the regiment proud and his sacrifice is in line with our tradition. The Second is the first regiment in the Indian Army to be awarded the Victoria Cross. In the 1965 conflict, we snatched Dera Baba Nanak. Exceptionally difficult tasks have been entrusted to our boys and we have always proved our mettle,â€ said Lt Gen Kaushik. The 2nd Rajputana Rifles is the sixth highly decorated unit of the Indian Army.Â 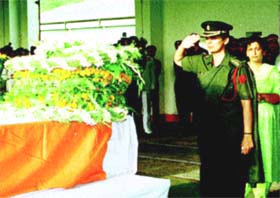 FAREWELL HERO: Capt Jayashree saluting the mortal remains of her husband, Major Vivek Gupta, who was killed in the Army operations in the Kargil sector. Photo: Subhendu Ghosh

While a grief stricken Capt Jayshree barely contained her sorrow, it was left to Maj Guptaâ€™s relatives to remember him. â€œVivek had last come on leave in May. His unit was in the Valley but it was only after he returned that they were asked to move to Kargil. Only one word can describe him: he was a dynamite,â€ said his cousins Ravi and Shailendra Singhal.Â

After all the ceremonies, she came forward slowly, saluted him in an immaculate drill, laid a wreath, said a silent goodbye and was gone. Her personal moments with him would be reserved for later.

What was going on in the mind of Captain (Dr) Rajshree Gupta as she paid respects to her husband Major Vivek Gupta of Rajputana Rifles who laid down his life fighting in Kargil on June 14 can be well imagined, but she never let her composure desert her. 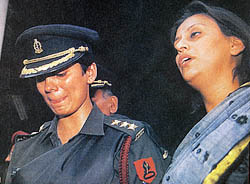 MISSION: Like so many company commanders, Gupta was leading a dangerous uphill assault against entrenched intruders. He captured two bunkers before being cut down.Â

Only a few days ago Major Vivek Gupta was having the time of his life in Drass. He said as much in a letter of June 8 to his father, Lt-Colonel (retd) B.R.S. Gupta. "You should feel proud of me ... I am contributing something for the nation in this uniform I have worn ... being a company commander at this time is the greatest experience one can have." Ironically, the elder Gupta was to receive the letter in his Dehradun house only at noon on June 17. By then the Army band had played out Dead Body Slow March. And his son's last rites had been completed, just half an hour before.

Vivek died on June 12 after capturing two difficult posts the same day on the wind-swept, icy slopes of the Drass sector. He perished on the battlefront when a fusillade of bullets from the Pakistanis tore open his torso, but not before he and his company men had slain seven members in the enemy camp. Death came swiftly, said a colleague, who saw Vivek mowed down by that first burst from a bunker and from the hills. Death can be very lonely in Kargil. The major lay in the snow alongside dead colleagues for two days. It was only on June 15 that a team could keep the enemy fire at bay and secure his body from the slopes. It ended, literally, exactly seven years of army life for "Vicky" who was commissioned in the 2nd Rajputana Rifles on June 13, 1992.

Vivek Gupta hadn't made up his mind about joining the army until he was settled in Dehradun after his father retired from the forces. He would chat up cadets and go swimming at the Indian Military Academy and soon made up his mind about which way his future would go. Says Anup Kumar, a close friend who edits a Dehradun-based monthly: "It was during those days in Dehradun when he had just entered college that we talked a lot about his joining the army. He knew that was the life for him."

In his hometown Dehradun, friends, relatives and armymen gathered to pay their last respects to a man they admired in life and death. Even his estranged doctor wife, Captain Rajshree Bisht, was there, sobbing quietly and saluting the man she had married in June 1997.

A National Defence Academy graduate, Vivek once told his father that he wasn't just interested in "counting socks and trousers" in the army. That was in response to his father's attempts to get him a posting in one of the safer divisions like Ordnance. "I am proud of my son, in my eyes he died a hero," wept the senior Gupta. Vivek would have liked that