A preliminary examination of the body of Squadron Leader Ajay Ahuja showed bullet wounds and he was most probably shot dead after baling out from his MiG aircraft which was downed by a Pakistani missile, said Air Vice-Marshal S. K. Malik. "His body had bullet wounds,'' he said. 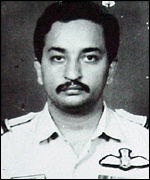 Calling upon the country to "share my sadness over the death of a valiant officer'', the officer said details would be known only after the post-mortem was completed in Srinagar.

Speaking of Ahuja, the Air Force said the officer made the supreme sacrifice for his country while remaining over infiltrators-held positions to help coordinate rescue attempts to locate Flt. Lt. Nachiketa, who had baled out after his plane stalled due to an engine trouble.

This extremely courageous act involving immense risk to his life exemplifies the daring qualities of Indian fighter pilots engaged in the present operations. We salute this brave officer for his heroic act and rededicate ourselves to the task at hand to evict the intruders from our territory,'' said the IAF.

The mortal remains of Sq. Ldr. Ahuja, who was killed four days after his 36th birthday, will be cremated with full military honors in his village in Punjab's Bhatinda district, said Air Vice-Marshal Malik. Ajay Ahuja, from Kota in Rajasthan, was commissioned as a fighter pilot in 1985. His 14 years as a fighter pilot included a stint as an operational pilot on the MiG-23 fighter-bomber and MiG-21 variants, besides instructional flying experience of over 1,000 hours. An A2 class instructor, he was extremely popular among his pupils because of his patient and cheerful nature, said IAF officials. His wife, Mrs. Alka Ahuja, and son Ankush survive him. 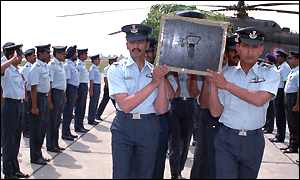 IAF personnel carrying the body of Squadron Leader Ajay Ahuja on Sunday. Sqn Ldr Ahuja’s MiG-21 was shot down by a Pakistan surface-to-air missile on May 27. Photo: Pradeep Bhatia

The mortal remains of Sqn Ldr Ajay Ahuja, whose MiG-21 was shot down in Kargil on May 27, were consigned to the flames in Bhatinda this afternoon with full military honours. Heart-rending scenes were witnessed when Ahuja’s six-year-old son Ankur lit the pyre and Army bugles sounded the Last Post. The cremation took place some 2 km from the Air Force base here.

The entire village of Killi turned up to pay its respects to the fallen hero. Ahuja’s body was flown in here from Srinagar by an IAF plane. The body was received at the Air Force base by Air Force officials and was taken to the MI Room where Ahuja’s widow, Alka, received it.

There was not one dry eye around. A group of people shouted “Ajay Ahuja Amar Rahe.” Ahuja’s relatives were embittered by the reports that said that though he survived the crash, he was shot dead by the Pakistan Army. His father, Purshottam Lal Ahuja, said that he was proud that his son had laid down his life for the country.

India today lodged a strong protest over the “cold blooded and cowardly” murder of Sqn Ldr Ahuja by Pakistan. IAF spokesman Air Vice Marshal S K Malik stated that the post-mortem report revealed that Ahuja was shot twice, once through the ear and once through the chest, after he had parachuted into Pakistani territory. He also suffered a fracture on his left knee.

The post-mortem report of Ahuja revealed a “penetrating gunshot wound, “entry near his right ear and exit near his left ear.” The second wound showed “entry 2 cm medial to the right nipple and exit near left iliac crest.” AVM Malik said that Ahuja’s colleagues are particularly angered by the way he was killed in captivity. “They are now even more determined to avenge his death,” he said.

Sqn Ldr Ahuja was married to Alka ten years ago. He was posted to Bhatinda two years ago.