MISSION: Part of the first column given the task of taking the crucial Tiger Hill overlooking the Srinagar-Leh highway, he killed three intruders before he was shot in the head. 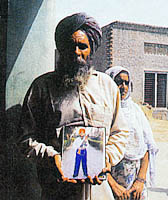 It was the kind of midnight knock that 900-odd residents of Ghurkhani village in Punjab's Mansa district hazily recalled. They were common in the early '90s when terrorism was rampant and police raids took place frequently. But on May 29, the policemen who came to Gurkhani in the dead of night had a different function: they had come to deliver wrapped in the tricolour, the body of Raswinder Singh, another casualty on that bleak battlefield in Kargil.

Ghurkhani, situated in the backwaters of the Malwa district, is plagued with a water-logging problem that brings on repeated crop failures. "Seeing this, my son decided to join the army. He liked the idea of living with guts and honour," says Harcharan Singh, Raswinder's father. Like most Jat Sikh boys, Raswinder took to the gun more than the plough. On leave from his regiment (the 8 Sikh) recently, Raswinder had got himself photographed with a self-loading rifle in different poses. These he had framed and put up on the walls of his house. Before going back to his regiment, father and son stood in the yard and inspected their house. "Once the war is over, I'll come back and help you repair the cracks," Raswinder had promised.

That won't happen now. But Harcharan doesn't have to worry -- over the past two weeks people from all over have been pouring in to share his grief and help in any which way they can. This desolate Punjab tehsil already boasts of having three martyrs in the Kargil war -- but Raswinder's feat is easily the one that everyone recollects with pride. Raswinder was involved with the important task of reclaiming Tiger Hill -- a strategic point in the Drass sector -- which gave the intruders access to the Srinagar-Leh highway. He was part of the first column that went up the hill on the impossible task of trying to uproot a well-entrenched enemy up in the heights. Most of the patrol was pinned down by heavy fire, but Raswinder along with another jawan pressed on killing three of the intruders before an enemy bullet pierced his head.

This tale has now been recounted a million times in Harcharan's house. Yet, every time it ends there is a solemn silence among those who have trooped in to pay their respects. Among them is Tarlok Singh, the only survivor of the five Indian National Army soldiers that this village has produced. And even this 85-year-old war veteran has a tear in his eye as he mumbles: "I will die a pensioner but this boy will live on forever -- as a martyr."