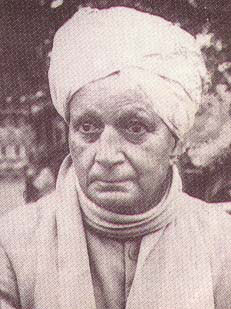 by Braj B. Kachru

Pandit Zinda Koul is a well-known poet of Kashmir. In Kashmir, his students and friends used to call him 'Masterji'. He came to be called 'Masterji' because he used to teach many Kashmiris, both in school as well as at his home. He died in Jammu in the winter of 1965.

In the beginning 'Masterji' did not write in only Kashmiri. He wrote poetry in Persian, Hindi, and Urdu, as well. Masterji's poetry has been published in all these four languages. However, he made his name by writing in Kashmiri.

His well-known book in Kashmiri is Samran. It was first published in Devanagari, and later the government had it printed in the Persio-Arabic script. The Sahitya Academy of India gave Pandit Zinda Koul an award of five thousand rupees for this book. Masterji received this award in 1956.

Masterji had to face many difficulties in his life. He was a school teacher for a long time. After that, he worked as an ordinary clerk.

Masterji started writing in Kashmiri in 1942. In his Kashmiri poetry, he has written primarily on devotion and peace. His poetry was greatly influenced by Lal Ded and Parmanand.

Masterji composed poetry only for (his own) pleasure. Those who know say that Masterji's poems in Kashmiri were better than those in Hindi and Urdu. Masterji translated the poems of the famous Kashmiri poet Parmanand into English. These poems have been published in three volumes. Kashmiri poetry suffered a great loss upon Masterji's death.

One would cry and not restrain the tears,
But crying is of no avail,
Shedding incessant tears is of no avail,
And knocking one's head against
boulders is of no avail.
And knowing that there is none to heed,
Why this urge to plead!
Why dash darts into the void!
Mere compulsion! Mere helplessness!
The body is consumed minute by minute,
suppressed by hunger and thirst and cold,
chained by ailments and kith and kin
depressed by constant worries and woes.
And once these worries cease to exist,
the body is tempted and lured
by numberless temptations.
The restless mind is without any peace
for something has obsessed it.
Without the encounter with the Good,
Without the realization of the Good,
The mind is searching for something lost
like a person drunk in sleep.
More affliction of desire and body!
Our ears have heard,
Our hearts have believed,
that sometime, somewhere, someone
caught a distant glimpse of Him.
We pine for Him; we long for Him,
For we think he is sulking from us
hiding under the bushes.
Indeed, love is a painful obsession!
I ask
The one who is hidden far and away,
The one who gives us a deaf ear,
Does he ever enquire how we are?
Does he ever recall where we are?
Does he ever ask himself,
"I wonder what is the lot of those
Whom I put in the dismal dark,
Whom I let loose
Over the hills, over the streams, over the woods?"
Indeed, beauty has no compassion!
We could argue,
"Why expect love from the loveless?
Why expect fruit from a willow?
If you do not know his whereabouts,
How can you plan his search?"
But heart will not retract the steps
For how can one chain the air!
For how can one blame the heart!
Love is not a child's play!
It is the sound from within;
It is like the fragrance of the musk.
The musk deer hunts over hills and dales
looking for something that is within him.
The heart is like the musk deer, searching
without that which is within.
The fragrance of the dear one pulls him out
with eyes shut and hands down.
He is playing the game of hide and seek,
appearing here and appearing there.
Once the moth has seen the lamp afar,
how can it stand still?
It must chase the light with frenzy
(Even though the light is not seen).
It must tear through the seven robes of wisdom.
Beauty is not mere enchantment!
Mere compulsion! Mere helplessness!
Mere affliction of desire and body!
Indeed love is a painful obsession!
Indeed beauty has no compassion!
Love is not a child's play!
Beauty is not mere enchantment!

''He rejected the dross and assimilated the pure"

Mysticism is a continuous exercise in self- realization. It is an incessant mental drill in which the self and the super-self are fully identified. In Kashmir from the hoary times to the present day, this urge of the soul for becoming one with the super-soul has been always emphasized. Monistic Shaivism, as propounded in the 'Shiva Sutras' of Acharya Vasu Gupta, and later interpreted profusely by Abhinava Gupta, is the first mile-stone ;of the human spirit on its pilgrimage to self-consciousness in Kashmir. The Kashmiri version of Persian Sufism has also influenced the Kashmiri thought to a large extent. This veritable quest for self-education and self-discipline is therefore not at all foreign to the mental fiber of a Kashmiri. It is in his blood. Lalleshwari and Nund Rishi (14th Century AD) epitomized this mental trait in their Vakhs and also gave it the most homely and appropriate expression in Kashmiri, pure and simple. Till then either Sanskrit or Persian ruled the day in this field.

This torch of interrogation and consequent self- satisfaction, the hallmark of mysticism, was kept alive by- a host of Kashmiri thinkers like Parmananda, Rupa Bhavani, Gobind Kak, (Vanapoh), Shamas Fakir, Ahmed Rah, Samadmir, Shah Ghafoor and others and its virgin heights were admirably scaled by these stalwarts.

In mysticism two distinct trends are discernible. The first, born of experience, is termed as 'revealed' and the second, attained by intellect, is named 'intuitive'. The goal of both these media is the same; firstly, locating clearly the frontiers between the immanence and transcendence, and finally, fusing these into each other. The acme of such intellectual pursuit is rising above the Finite and getting closer to the Infinite as speedily as possible, thereby minimizing the distance between the two. In Islamic Sufism also, similarly, two forms of mystic exaltation are noticed, abnormal and supernormal. Ibni Farid calls these respectively as intoxication and sobriety of union. It can therefore, be said safely that intuitive mysticism is a non-stop intellectual process and is more arduous than the revealed for reasons obvious.

In this context of mystic discipline, Masterji has earned by his own right a prominent place in the galaxy of such thinkers who churn their intellect incessantly and groom it to explain the ideal spurning the actual. This should not be treated as self-deceitÑfleeing from the life in all its naked realities instead of facing it with courage and patience. Masterji did not forget life around him, he did not abjure life even though it was always bitter to him. He was a civil servant by profession but a Savant by nature. As long as he remained in -government service, he acquitted himself very well with undivided dedication to his profession. He drank at the fountain of life most voraciously. He wore his profession on his sleeves, so to say.

Perhaps, this acute sense of responsibility to his profession ignited the first spark of the mission he had to undertake in future. This formative period in his life ushered in the mental ferment which is so necessary for reaching the mystic plane. It is the moment of self-forgetfulness when the 'actual' with all the teeth is incapable to bite; the soul commences its flight to touch unknown horizons and the body has no meaning at this stage.

Masterji's life was no bed of roses. It had nothing palatable to offer to him, it only enabled him to keep the wolf from his door. He never lived in affluence. The cruel hand of death snatched away his dearest son; he had to fend for his widowed daughter-in- law and her children. He did not succumb under the weight of such calamities. He fought his life's problems in the most detached manner conquering these bit by bit, never losing hope. These came as a blessing in disguise and made a mystic of him, not out of spite for life, but for making it more meaningful.

Masterji was a profound scholar of Persian. He could not escape the influence and impact of great Persian mystics like Shams Tabrez, Maulana Rumi, Hafiz Shirazi and others. He had fully assimilated all that they had to say. The echo of Shams Tabrez's 'Man tu Shudam, tu Man Shudi' can be unmistakably understood from his verses also.

Masterji built his personality brick by brick. The foundation for this was provided. by the Hindu mystic lore especially by the Kashmir Shaivism. Vedanta and the Upanishads also acted as the cementing link to make it more broad-based. Both are portrayed most eloquently in his 'Sumaran'. Masterji's intuitive mysticism is a happy blend of Hindu mystic thought and Islamic Sufism. He toiled hard to attain to that plane of self-consciousness where the material contours melt away before the effulgence of the 'spirit'. A hand-to-mouth living gave him the required tools for rising above it. Erudite scholarship in Persian and Sanskrit opened for him the vistas of mystic exuberance achieved by a host of his predecessors. Self-discipline in the case of the first and self-education in the case of the second, are in themselves a worthy preamble to self-dependence, and this in its turn paves the way to self-consciousness. Masterji's unambiguous attitude to mysticism is of synthesis in which intuition and intellect form the woof and the warp. The didactic content is, therefore, somewhat subdued in his poetry. He does not claim to be a preacher. He only unravels the conclusions that he has arrived at in life. He does not even analyze these but only clothes these in most pulsating words as they ooze forth. The intensity of feelings does not afford him even a breathing time to ruminate on what he has written or expressed. He goes on serializing his heart-beats most candidly. His approach is suggestive and not direct. His innate introspection rejects the dross and only assimilates the pure - the yard-stick for it being his unerring intellect. So 'Sumaran' is a codified version of his feelings and not a treatise on morality or ethics. His poetry is clear and more intelligible than that of Lalla or Nund Rishi, because his discriminating intellect has an edge over their on-rushing experiences by which they feel overwhelmed. Masterji is always sure of the ground under his feet.

Masterji was a conscious artist like Goswami Tulsidas who without mincing words beckons to us in undertones, by implication, to make this life a veritable bridge to the life-beyond. He makes a happy compromise between the self and the super- self, matter and spirit, enjoyment and renunciation, intellect and intuition. He does not leave us guessing. That is, perhaps his most substantial contribution to our unbroken heritage of mysticism.