Swami Ashokananda as I Knew 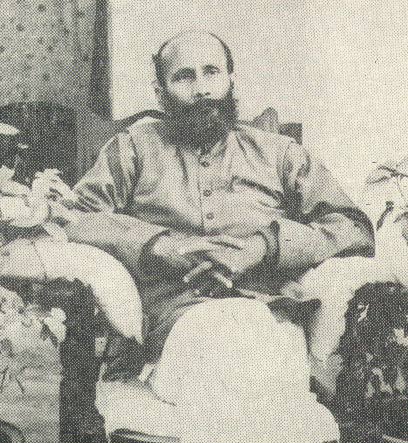 It means that an ordinary animal serves the mankind throughout its life and even after its death its body is useful. Several things can be prepared out of its hide and bones for the benefit of the man. But this is not the case of mankind. After the death of a man nothing is being utilised out of his mortal remains. So long a man is alive, if he does the work for the benefit of mankind and be useful for all, his name will remain even after his death.

Our Swami Ashokananda comes under the category of the immortals by his service and his name has been well known in Kashmir.

He was born in a poor Mukherjee Brahmin family in a small village in Jessore district now in Bangla Desh. When he was of three years age, his father died and he was left alone with his elder brother aged 12 and widowed mother. Being poor, they had to live a hard life on the earnings of the lady and her first son.

Our Dinabandhu, to be known afterwards as Swami Ashokananda, was a very calm and quiet natured boy but his elder brother was of rash temper. Even for a small fault he used to beat poor Dinabandhu and his mother was very much worried about the behaviour of her elder son.

Dinabandhu was enrolled in a school as per tradition at his fifth year. He had to walk bare-footed in adverse conditions to his school far away from his home. His teacher was also of harsh temper and if the boy was late on any day he too used to beat him. Neither in the school nor at his own home he was getting any affection and he started to remain absent from the school frequently and preferred to sit under a mango tree in deep contemplation.

One day he was severely beaten up by his brother for his frequent absence from school and he was warned that if he persisted in doing so, he would be driven out of his house. His mother also admonished him without realising the boy's plight. The poor boy could not tolerate such kind of treatment for long, both in the house and in the school and one day he took to his heels and absconded.

It was said that for years he did not appear. Some said that he went to Himalayas, some that he was doing Sadhana in some unknown place. After a prolonged period of absence, he came in contact with His Holiness Shri Sachitananda Maharaj known as Dadaji. Dadaji was a staunch disciple of Holy Mother Sharada Devi. He was a renowned Sanyasi of those days. Under Dadajis kind guidance, his spiritual pursuit developed.

It was not known as to how he was called Ashokananda, though some attributed that he was called so because of his constant meditation for hours under an Ashoka tree.

One day in the early hours of dawn, he had a dream in which a young tall Sanyasi of divine face standing before him and keeping his right hand on his head as an 'Ashirwad' and advising him not to waste his time there but to go to Kashmir valley instead, and try to continue the incomplete work which he could not finish himself during his lifetime.

When Ashokananda woke up, he could not still get over the dream and mentioned this to Dadaji and on his advice left on his quest to Kashmir.

Sometime in 1935-36, he reached Sumbal and stayed there for a year or two. He was not satisfied and moved this time to a hilly place near Achhabal village which later came to be called Nagdandi. This place was surrounded by thick pine trees and had many natural springs gushing with clear water. In Kashmir valley, Nag means spring and there were many such springs: Kokar Nag, Beri Nag, Anant Nag, Nag Dandi etc. In this area, Ashokananda selected a gigantic pine tree and sat under it for his Sadhana.

He sat bare-bodied regardless of snow and rain and none knew that such a person was residing there for a long time. The jungle was thick and none would dare to enter it as it was under the control of the Maharaja of Kashmir for his hunting sprees. The place was inhabitated by a number of tigers, panthers, wolves and several varieties of stags.

Swamiji was absolutely fearless and the dangerous animals also were not afraid of him and hence there seemed to be a close rapport between them. Many times, the wood cutters appeared to have noticed Swamiji in deep meditation and many animals Iying about him without fear. The news soon spread and people started flocking to see this unusal sight and have the darshan of Swamiji. It was said that many times Swamiji used to order the animals to go away from near him to permit the visitors to come close to him and they used to obey him like tamed animals.

Once Maharaja Hari Singh of Kashmir, accompanied by his guards happened to pass through the jungle when he espied a young Sanyasi sitting under a pine tree in deep meditation. He was surprised to see the wonderful sight of a radiant young Sanyasi still as if in trance. He and his guards dismounted and watched him for more than half an hour but still there was no movement of any limbs of Swamiji. Suddenly a horse neighed and disturbed the silence. Swamiji opened his eyes and saw before him some royal person and his attendants, standing with fear and awe writ on their faces for having disturbed him accidentally.

The Maharaja was quick to offer his apologies but Swamiji smiled this away and soon both of them fell into a long close conversation. Maharaja Hari Singh was deeply impressed by Swamji and after receiving his Ashirwad left the place with his retinue promising to call on him again. Then began his frequent visits to Swamiji and Yuvaraj Karan Singh was also one of those who accompanied his father when he visited Swamiji.

Their visits in turn encouraged visits by others and as no proper shelter was avilable for all, a small hut with a kitchen was constructed in the beginning. Gradually some disciples donated lands and some more lands were also purchased and more rooms were constructed.

His discourse at Satsang was becoming popular and many people from other parts of Jammu and Kashmir, Delhi, Bombay, Kanpur and even from abroad started to visit the Ashram. He was a very good singer and used to play on Sitar or Been. Soon a small temple for Thakur Sri Ramakrishna Paramahamsa and a guest-house were also added. By 1948, the Ashram acquired about 7 acres of land and an apple orchard was started to make the Ashram self-sufficient for its maintenance. The Ashram has now about 800 fruit bearing trees of 17 varieties. The revenue earned by the auction of annual crop harvests meets the major share of the expenses of the Ashram.

The period between 1935 and 1970 was a golden era for the Ashram. It became a pilgrim centre attracting people from far and near, without distinction between rich and poor, caste and creed, literate and illiterate. Thousands used to take part in Sri Ramakrishna and Ma Sharada jayanthis celebrated here.

Swami Ashokananda was a perfect Sadhak but he never performed any miracles. His sound advice and kind look were the only remedy he offered to those who visited him. He was so simple that even in the severe winter he wore only a simple dhoti and a chaddar which impressed the visitors very much. Occasionally he used to visit Bombay, Delhi or Calcutta at the pressing invitations of his admirers and disciples.

During the later part of 1970, Swamiji was not keeping well. He was anxious about the continuance of the work after him. Being an ardent disciple of Sri Ramakrishna, he was keen that the Ashram should be taken over by Sri Ramakrishna Mutt. He also came to know of the reluctance on the part of Sri Ramakrishna Mutt to take up any new commitments due to their own preoccupations with other centres. He sent an invitation to Sri Eknathji on the advice of a mutual acquintance.

Sri Eknathji visited Kashmir and called on the Swamiji who was sick and a bed in Dr. Giyalal Ogra's house at Srinagar.

Swamiji told him of his interest in handing over the Ashram to Sri Ramakrishna Mutt or to the Kendra for its proper running after him.

Sri Eknathji too was reluctant to accept the proposal and he informed Swamiji that he will talk and persuade Ramakrishna Mission authorities to accept his offer.

However in the meantime Swamiji passed away and in his will he expressed his desire to handover the properties of the Ashram to Ramakrishna Mission or Vivekananda Kendra.

Soon it became clear that Sri Ramakrishna Mutt was not taking up the Ashram and thus it came into the possession of the Vivekananda Kendra.

Swami Ashokananda attained the Maha Samadhi in December 1971. As per his wishes, his mortal remains were cremated at the premises of the Ashram which he used to call his Tapo-bhumi and Karma-bhumi. Thousands of his devotees thronged to the funeral, covering long distance from Jammu and other areas to Nagadandi.

His eternal Soul continues to shed its blessings on the Ashram which was dear to him.