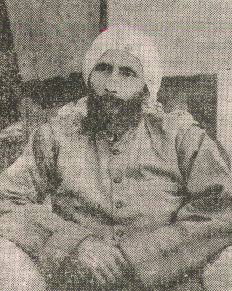 About two kilometres away from the historical and picturesque town of Achhabal, on the right side of the road to Uma Devi ( Barari-Aangan ), there is the Ramakrishna Mahasammelan Ashram, which was founded by late Swami Ashokananda, more than forty years ago.

It is a fairly big Ashram now, a compact complex of some buildings and a small temple, dedicated to Ramakrishna Paramahamsa, at the foot of the wooded Achhabal hills. The Samadhi of Swami Ashokananda is within the precincts of the Ashram.

I am one of those persons who have seen this Ashram, which was the abode of Swamiji for nearly thirty years, grow from a tiny two-kanal hermitage, with a solitary hut within, into a sprawling five-acre Ashram, inclusive of a well maintained small apple orchard.

I vividly recall the warm summer day back in 1940, or perhaps 1941, when two tonga ]oads of people travelled from Anantnag to Achhabal. I was one of the party, a young school boy. I was staying with an uncle at Anantnag. One day my parents came there and the entire household was thrilled when my father, late Shri Shambunath Kaul, who was a devout disciple of Swamiji, disclosed that Swamiji was somewhere at Achhabal.

Swamiji, it may be recalled had been staying for many years in a small room at the shrine of Nandi Bhairav at Sumbal ( Sonawari ) but had moved out from there and his whereabouts were not known to many people. Naturally when the disclosure came, it thrilled all; because all of us. our family and relatives, were deeply attached to Swamiji.

At Achhabal we got into a three-storey building across the road, opposite to the Mughal garden and climbed up to the third storey. This storey had a narrow but long wooden balcony on the side facing the road and there we found Swami ji sitting on a bed and talking to some people. The house was the residence of one Shri Amarnath, a police official posted at Achhabal and a devotee of Swamiji. It was a great reunion which gave tremendous joy to everyone.

A little later we again got into the tongas and took the road to what turned out to be a pretty small retreat on the fringes of a wooded slope Nagadandi.

I recollect there was a tall poplar tree by the side of the road where the tongas halted, I caught sight of a Sanyasi, with a thick beard and matted hair, perhaps collecting cowdung. Later I learnt that he was Shri Damoder Ji, who was helping in setting up the small Ashram. Perhaps he is now at Wanpuh near Anantnag.

We climbed up the little distance to the Ashram. All that wefound was a newly built small hut on the banks of a small pond fed by a tiny natural fresh-water spring just inside the forest. An ideal site for a secluded Ashram and we were told that Swamiji himself had chosen the site. The hut consisted of two small rooms. The interior one which was smaller and hardly enough for one person to stretch himself, was to be Swamiji's sanctum for many years. There was also a tiny shed next to the hut which was to serve as the kitchen. This shed was improved later to provide more space.

Swamiji had not moved in yet as the Ashram was being given finishing touches. Those doing so were to be the first resident disciples at the Ashram. They were Shri Shambunath, later to be known as Shakti Chaitanya and Shri Trilokinath who now lives in Srinagar.

While at the Ashram, Swamiji himself took us round and showed us a dry spring a little distance inside the forest. On a subsequent visit I found water gushing out of this spring.

After spending sometime at the Ashram we again took to the road in the two tongas along with Swamiji and proceeded to Uma Devi. Some kind of a festival was going on at the shrine and weall had our mid-day, meals there. I do not recollect clearly whether on our return Swamiji got down at Nagadandi or came back to Achhabal.

For me it was the beginning of a long association with Nagadandi I was deeply attached to Swamiji and the placefascinated me and therefore I paid frequent visits during my school and college days. I would spend weeks in the Ashram helping in vegetable cultivation, watering and such other chores. Iwas an ignorant young man and did not have an inkling of Swamiji's towering spiritual height. I would simply treathim as a friend.

One early winter day I went to the Ashram and spent the night there. Next morning when we woke up we found there had been a heavy snowfall during the night. I was stranded as no transport was available. I got bored and told Swamiji that we would roll some snow and make a snowman. He could feel my boredom and readily agreed. We got so engrossed in the job that we had to seek the help of Shaktiji and Trilokiji also and a whole day was spent in the pastime.

On another occasion when I spent many days at the Ashram, I would bicycle down to Achhabal every day to collect the mail. One day I asked Swamiji whether he knew cycling. He replied in the negative and I promptly offered to teach him. It gave me the joy of a proud teacher when he agreed. There was a small open space surrounded by forests, on a higher elevation opposite the Ashram. I toiled up the slope with the bicycle with Swamiji close on my heels. There I tried to teach him the art of riding the machine. The seat of the bicycle was very hard and he asked me to get a sheet of cloth to cover it. I raced down to the Ashram and returned with a sheet a few minutes later. And imagine my shock when I found Swamiji riding the bicycle with theease of an expert over the undulating ground.

A few years later, Brig. Omkar Singh became the next-door neighbour of Nagadandi when he bought a plot of land to lay an orchard. He built a house there and would live there during the summer months. He would visit the Ashram almost daily in the evening. This would be followed by long walks in which I would always participate.

The next resident disciple at the Ashram was Shri Jia Lall who came to be known as Maharaj Ji. He is possibly in Jammu now. After 1947, he was joined by Shri Makhanlal Chaku and Shri Kanaiyah Lall Kaul, who got the names of Sambit and Shanti respectively.

I often visited Nagadandi as long as Swamiji was there. My association with the Ashram will always be one of the most cherished memories with me. When I think of Nagadandi, my mind is flooded with recollections which might find expression some day.