Kashmir: The Fountainhead of Indian Culture

From the time of the beginning of the formation of the present Asian continent, Kashmir has remained an unseparable part of Indian Peninsula. This unchallengeable geographical truth has been expressed by Kalidasa in the first verse in Kumara Sambhava giving the description of the northern boundary of India thus:

"The paramount Himalayas in the North extending from the East to West stands unshakable in its glory."

After the coming of Aryans to India, this geographical unity has been transformed into a cultural unity. The Nadi Sukta of Rig Veda (7th Sukta of 10th Mandal ) gives a clue to almost all the rivers which flow in the present Afghanistan and Kashmir viz., Kuma ( Kabul ), Trushtama ( tributary of Chitral), Vipasha ( Vyasa ) Shutudri ( Sutlej ) etc. The Rig Veda also mentions of Gandhar which was a part of Kashmir. The Aryans were impressed by the breed of cattle found in this region.

The mantra from Rig Veda

says that they liked the variety of cattle found in Gandhara.

Kashmir had a Republican system of Government for many years. It is an indisputable fact that Kamboj ruled over this State. Later, Panchal established its rule and a part of Kashmir, Peer Panjal is a witness to this fact. Panjal is a distorted form of the word Panchal. Later, the Muslims prefixed the word " peer " to this, in memory of one Siddha Fakir.

In the Epic period, this truth became clearer. Kashmir has been given a prominent place in the Mahabharata. In the Vana Parva of Mahabharata, there is a description of Pandava's journey to the Vrashaparva Ashram. It says that during this journey towards China they crossed Kashmir. Addressing Janamejaya, it says that before the Ajnatavasa, the dethroned Pandavas were wandering for 12 years in these regions. They travelled over Gandhamadan mountains, Kailash, Bhadri Ashram, and other difrerent hermitages and at the end reached Subhahu region.

Though it may seem to be a poetic imagination that Pandavas visited China, it proves that Aryans were familiar with the regions in and around Kashmir.

Around 700 B. C. in India, Panini's Sanskrit grammar played a great role in the spread of Sanskrit literature. In his " Ashtadhyayi " dealing with history, literature and culture, the geographical details of India are given. So this book has contributed to the geographical knowledge of India after RigVeda and Mahabharata Panini is called by the people as Kashmiri, as he belonged to this region and hence was able to describe this region in great details in his book. But there is no ample proof for this. Generally, the historians say that he was born at Shalatur village formerly known as Lahu village ( in Campbalpur district ) near Takshashila. But from Ashtadhyayi it can be said that he had travelled in various parts of the country including Kashmir. In one of his sutras, there is a word ' Pandukambali ' which is also found in the ' jatak ': <verses> meaning " Indragopa coloured blanket produced in Gandhar". The art of dyeing blankets from various colours extracted from forest plants is in vogue even today in Kashmir and Peshawar. Even in ancient times, Gandhar was an integral part of Kashmir. Later, even during the time of Huan Chawang Kabul, Punjab and the entire mountain range of Gandhar was under the reign of a Hindu King. Kalidasa has depicted a picturesque journey of Raghu through this land in the 4th sarga of Raghuvamsa. There is a mention of his horses rolling in the sands of Sindhu banks and leaving marks of saffron. In Persian language Saffron is called "Kafishi " and that is why Kashmir is also known as " Kafishi ". Saffron has been cultivated in Kashmir since a long time and has always been famous in the Asian and European market. Kashmir Saffron has also been mentioned in Sanskrit Encyclopedia of China. According to Chinese records, in 647 A. D., the King of Kashmir had presented this to the Chinese Emperor. It was exported to Cambodia too. In 519 A.D. the King of Cambodia had sent a consignment of saffron to China. Kashmir has been described in Amarkosh with reference to saffron.

Kalidasa's description of the Himalayan region is in the form of the best poetry in this world. The latter section of Meghdoot, the 4th section of Vikramaurvashiya, the 7th part of Shakuntalam and the 2nd and 4th Sargas of Raghuvamsha and the whole of Kumara-Sambhavam describe the beauty of these ranges. From the description of the flora and fauna, it is observed that Kalidasa was for a long time involved in this region. 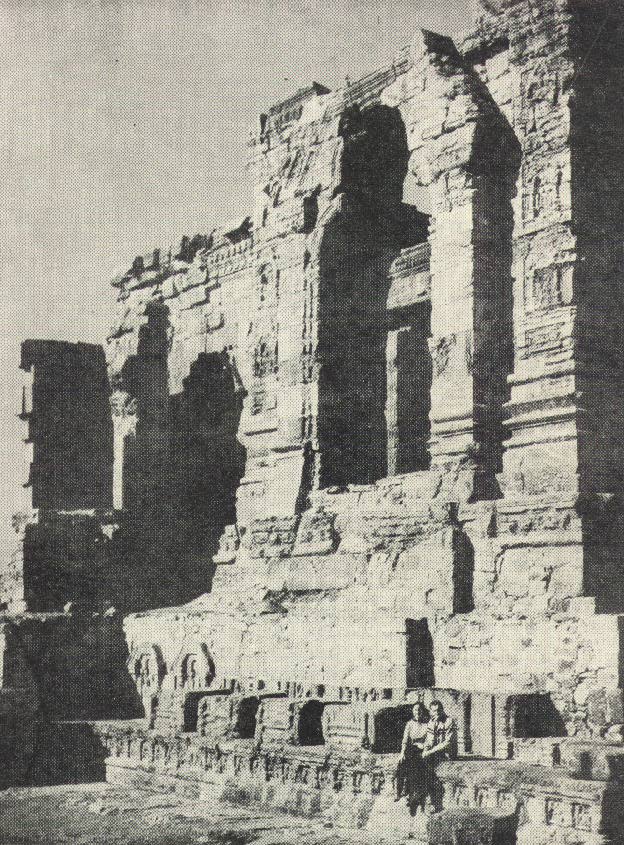 Kashmir has the privilege of giving birth to two great sons-Matrucheshta and Jagaddhar Bhat. Matrucheshta was a contemporary of Kanishka. They are considered as eminent poets in the entire Buddhistic world because of their contribution of hymns in the religious texts -" Chatushataka" and " Adharvashataka".

Nagarjuna, Aryashura, Dingnaga, Siddhasena Divakara and Acharaya Hemachandra have followed Matrucheshta's style in writing their religious texts. In the 7th century, when the Chinese pilgrim Itsing was travelling all over India, the hymns of Matrucheshta were very popular. The extent of their popularity can be judged from this story of Itsing:

" One day Bhagwan Buddha was taking rest in a garden. Accidentally a nightingale started singing sweetly. He felt very happy and told his disciples that this sweet singing bird would take birth as Matrucheshta in his next birth. "

Because of his belonging to Buddhism, Matrucheshta did not receive as much respect in his motherland as Kalidasa got. But in countrieslike China, Japan, Korea and Indonesia, every one remembers and considers him as the only poet who deserves utmost respect in the world.

In one of his stutis, Matrucheshta describes the weakness of human mind thus:

A second stutikar was Jagaddhar Bhat whose period of authorship was during 14th century. "Stuti Kusumanjali " is his famous poetical work. In this book in praise of his favourite God Shiva, he offers himself to Him in such a soul-stirring style that it wets one's eyes with tears and heart warms up with ecstasy.

Jagaddhar Bhat's name is unique - in Kashmir's Sanskrit literature because of his poetic renditions and moving figures of speech.

In Kushan period, Kashmir had become the centre of Buddhistic culture. At that time, Kashmir was a part of Kanishka Empire. To spread the glory af Buddhist principles, he arranged at Kashmir a conference which was attended by various national and international scholars. Then Kashmir was the centre of Mahayana cult, whence Buddhist monks spread their religion in Kabul, China and Tibet. The new Buddhist philosophy "Sarvastivada " originated in Kashmir. Thiswas propounded by Nagarjuna. Great scholars like Ashvaghosh, Vasumitra and Sugatamitra also participated in this conference. This lasted for six months during which period various Buddhist philosophies were discussed, reinterpreted and were rewritten in Sanskrit because at that time Sanskrit was in full swing in Kashmir. On the contrary, Ashoka's Buddhist edicts and literature were in Pali language. Though all over India, Pali and Prakrit were predominant Kashmir scholars helped to preserve the glory of Sanskrit.

Even though the atmosphere favoured Buddhism, it could not remain so for ever. The name of Bhagavata Dharma had spread to Kashmir also. During the region of Lalitaditya and his subsequent dynasty, not only Bhagavata religion but also the literature and art blossomed. Later, Buddhism was replaced by Shaivism. At that time, Gita was also interpreted in various ways by different scholars of Kashrnir. Of these, only two, one Vasugupta, founder of Shaivism and another by name Anandavardhana were most important. The Gita in use now is also based on their interpretation.

The encouragement given to the scholars at that time had been unique in the history of the world. From 8th to 15th century, Kashmir produced about 10-12 great scholars whose contribution has been more than half of the whole sanskrit literature. In the 8th century, Ratnakar wrote a great epic " Hari Vijay. " This grand Epic containing 50 sargas was a successrul outcome of the competition to " Kanya Kaumidi " of the great poet Magha.

Kshemendra, the Veda Vyasa of Kashmir, was so worried about the duality in the society that he decided to sacrifice his life for its upliftment. Based onthe Ramayana and Mahabharata he composed Ramayana Manjari and Bharat Manjari. He did a poetic translation of Brihatkatha Manjari from Sanskrit into Paisachi language. This book became a source of inspiration to other authors. This literary work has a humourous touch to the morals preached. His humourous literature ' Deshopdesha ' and ' Narmamala ' succeed in making even the hard-hearted soften. He has given such a strong blow to the Arishadvargas that it produces cheer even in the most gloomiest of hearts.

Sri Harsha, author of 'Naishadha' has been blessed by Devi Saraswati. He was the nephew of Rajanak Mammat. Sri Harsha was famous not only as a great poet but also as a philosopher and a Yogi. ln reality, the contribution of poetry and philosophy is very rare in Sanskrit literature. Naishadha contains all the best aspects of literature and poetry.

Kalhana-great poet and historian-too lived in Kashmir. He was the pioneer in having written the historic book " Rajatarangini " after his scientific research in Indian history and for this Sanskrit lovers will always be indebted to him. This book emerged as a result of his experience and knowledge which was not based on any historical literature.

To write historical works, he gave his own idea as follows:

"That scholar is praiseworthy whose words do not ring of any jealousy or hatred while narrating past history."

The speciality found in Kalhana which distinguishes him from the Western scholars of the l9th century is his view of considering the kings and commoners as equals. His book Rajatarangini gives equal importance to both the glory of kings and common mens' life.

After the peak of glory, the further development of Sanskrit was done by Kashmir Pandits. The bright stars in the sky of Kashmir literature are Acharya Bhamaha, Udbhata, Rudrata, Acharya Kutanka, Vamana, Anandavardhana, Abhinavagupta, Mammata and Kshemendra.

Kashmir has not only been the source for the development of Sanskrit literature but the stories of Mahabharata, Ramayana and Buddha spread throughout Asia, China, and Japan from this region only.

It was from Kashmir that Indian culture along with Sanskrit literature and Buddhism travelled to various countries of Asia and merged with their cultures. Even today, this is visible in the cultures of Indonesia, Philippines, Malaya, Kamboj and Siam. Kashmir has acted as a launch-medium to spread the Indian culture all over Asia. It was not only a medium but also a central point from which Indian culture spread from Sri Lanka to Central Asia and from Egypt to Japan.