Dr. Tamiri gives useful insights in to the role of Sir Amar Singh Technical School in training the first group of Kashmiris in landscape and portrait painting. For the first time the contribution of British painters in painting Kashmir has been documented. The author asserts that Kashmir had its own school of Painting in ancient times. He refers to the valuable contribution to art during Buddhist era. The telling testimonials of it are the unrivalled wall paintings of Alchi,Spiti and Western Tibet monastries. These evoke admiration and awe even today. Their historical linkage is traced to artistic fruition and excellence of Kashmiri artists as painting had acquired a divinized status during the time. The author refers to Mirza Haider Dughlat, who acknowledged artistic grandeur of wall Paintings in temples of Kashmir.Dr. Tamiri sees continuity in painting tradition in Kashmir. He remarks that Kashmiri artists formed a sizable group in Mughal courts. Muhammad Husayn Zarrin Qalam was the most prominent among these.Dr. Tamiri quotes the research work of renowned art historian, Barbara Schmitz who suggests that Kashmir was an entrepot for artists from India,Persia and Central Asia. It was from Kashmir that Mughal painting based on European examples of volumetric figures and recessional space, was first introduced to the Persian court at Isfahan and the Central Asian court at Bukhara.  Due to hostile conditions at home many artists left Kashmir in late sixteenth century and sought refuge in the adjoining princely hill states. It were these artists who became the pioneers of Pahari School of painting. Pandit Seu Raina was the founding father of Pahari School of painting. The author also records the role of other schools of Kashmiri miniature painting. The master painters of these schools were Tota Ram Naqash ,three generations of Tota Clan, Narayan Murutgar and many others. Contibutions of talented artists—ShivNath Raina, Som Nath Khosa and Jagar Nath Sapru, the products of Sir Amar Singh Technical School,based on the details provided by their families, are well highlighted. 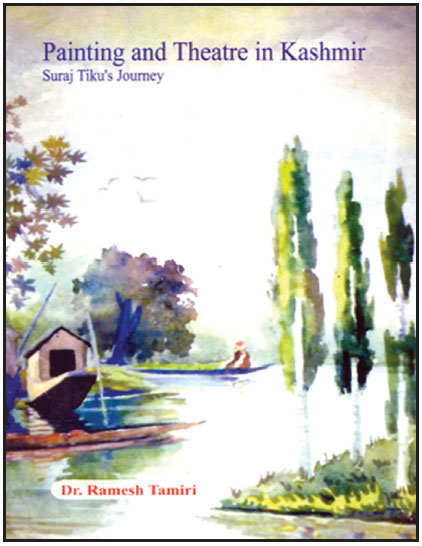 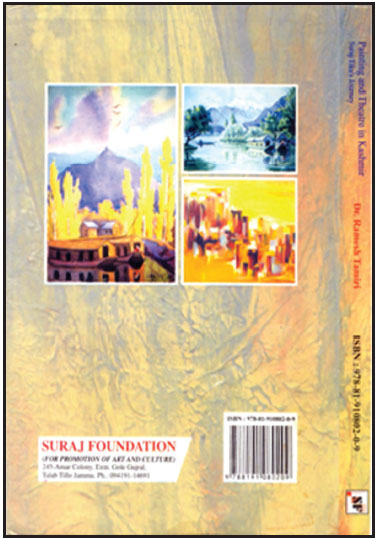 The chapter on Theatre history provides insights in to the evolution of theatre in Kashmir. The role of Raas leela and Ram Leela groups and the contribution of Parsi Theatre have been discussed well in how it provided the initial impulses to Kashmiris for theatre. Dr. Tamiri provides detailed information about early theatre groups like Amateur Dramatic Club, Kashmir Dramatic Club, Saraswati Dramatic Club, Kashmir Theatrical Company, Natak Vibag, etc. The impressive range of artistes covered by the author include Jagar nath Saqi , Madhav Dass, Ved Lal Dhar Vakil, Shamboonath Bhan, Shamboo nath Kaul, Mohammad Shaban, Abdul Satar Asi, Shafi Mir and many others.Kala Kendra and Cultural Front were two important theatre groups which were behind the cultural upsurge in the post-independence era in Kashmir. There is rich material on this in the book. The author has discussed the role of Moti Lal Kemmu in upgrading and recasting Bhand Paather, popular folk theatre.The strides in playwrighting find a prominent place in the narrative.

The immense contribution of legendary set designer, master painter and pioneer of Parsi theatre in Kashmir, Kashi Nath Bhan has been for the first time documented. Bhan was Suraj  Tiku’s mentor in the genres the latter practiced. The narrative is rich with interesting anecdotes about the life and work of Kashi Nath Bhan.

The second section of the book is entirely devoted to the personal and professional odyssey of Suraj Tiku. The latter distinguished as master landscape and portrait painter, a great set designer and a talented theatre actor.Tiku was also good in modern art.Suraj Tiku’s sense of great humour and personal traits also find mention.Tiku’s extreme humility is probably the main reason for his belated recognition. The concluding section details the contribution of members of Tiku clan to theatre.Many families in Kashmir have their even second and third generations also involved in fine and performing arts. These include those of Ved Lal Dhar Vakil,Som Nath Khosa,Prem Nath Pardesi, Madhav Dass, Shiv Nath Raina, Madhav Tiku, Moti Lal Kemu,Ghulam Rassol Santosh, Sajood Sailani, etc.

Dr. Tamiri has shown how use of oral history can be harnessed well for research. The  rare photographs of  artists, theatre actors,theatre scenes and paintings of Suraj Tiku that embellish the book are a reader’s delight. The rich content of the book and its readability will appeal to the scholar and laymen alike.