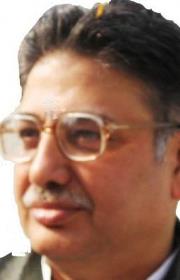 Dr Ramesh Tamiri has done a great service to the modern cultural history of Kashmir by writing this book.

Painting and theatre in Jammu and Kashmir have kept pace with other parts of the country though political instability in the region has always cast its shadow on their proper development. Dr Ramesh Tamiri has done a great service to the modern cultural history of Kashmir by writing the book ‘Painting and theatre in Kashmir – Suraj Tiku’s Journey’ which not only records the life and works of the great artist and set designer but also gives a detailed account of the evolution of these genres in the valley.
Kashmir school of painting, as per the author, finds mention in Nilmat Purana as early as 6th century and by Marco Polo in 14th century. It distinctly bore the influence of the Gandharan and Gupta art. After a lull for some time in the medieval period, Kashmiri artists found patronage in Akbar’s court.The Kashmir miniature School of painting, characterized by lack of interest in portraiture and use of wide range of colours, produced  great masters like Tota Ram Naqqash and his descendents. Nineteenth century found a flow of foreign artists and writers into the valley and rediscovered the importance of portraiture in paintings. Establishment of Sir Amar Singh Technical Institute in 1913 proved  a great boon for art and theatre in Kashmir. Great Masters like Kampassi, JN Mattoo, JN Sapru, SN Raina, M Raina, DN Wali, Manohar Kaul were a product of this institute. Ratan Parimoo, SN Bhat,Trilok Kaul, and PN Kachru, influenced by SH Raza and Percy Brown, later joined these artists followed by Bansi Parimu, GR Santosh, Kashmiri Khosa, Kishori Koul, Mohiuddin, NK Zadoo, RK Sadhu, KN Fotedar and Sculptors like B K Sultan, Gayoor Hassan, Shabir Mirza, Shaiqa Mohi, Rajinder Tiku and Mir Imtiyaz. The author has also included number of photographs of these eminent artists from the valley.
Tracing back the history to Raas Leelas and  Ram Leelas, the Kashmiri theatre was later influenced by the Parsi theatre in the 19th century though in the intervening period the rise of Hafizas (Nautch girls)and Bhands also finds mention. Amateur Dramatic Club  pioneered the establishment of regular theatre in Kashmir followed by a caravan of theatres like Saraswati Dramatic Club, Kashmir Theatrical Company, Natak Vibhag, Karod Tirath dramatic Club, Kala Kendra etc. The author has also mentioned the establishment of National Cultural Front, Moti Lal Kemmu’s revival of professionalism in Bhand Paether, contribution of National School of Drama and evolution of Playwright techniques in the valley.
In the chapter entitled ‘Kashi Nath Bhan-Suraj Tiku’s Guru’ the author has paid great tribute to the eminent painter, actor, director, teacher and social activist, Kashi Nath Bhan. He has reconstructed the life and works of this great artist by interviewing a number of people who knew him closely since most of the works of Bhan had been destroyed during militancy in Kashmir. The life of K N Bhan is a saga of strife and endeavour. He was the pioneer of art and theatre in Kashmir and left a great legacy behind him. Bhan’s encounters with eminent national artistes like Prithvi Raj Kapoor are also recorded which throw light on his character, vision and resolve.
Part two and three of the book deal with the evolution of Suraj Tiku as a master painter and a creative set designer. The life of Tiku is full of strife. He obtained Diploma in Fine Arts from Sir Amar Singh Technical Institute, worked initially as a teacher and later in Songs and Drama Division and learnt painting and theatre from his Guru, K N Bhan. He had a passion for painting landscape of Kashmir which he continued even after migration from the valley in 1990. Nevertheless, he excelled in Portrature and miniature paintings too. His contribution to set designing and theatre was unparallelled. He was known for his sense of humour and philanthropy. He breathed his last on 26 January 1997 in exile, exasperated by heavy smoking and consequent asthma. The author has included a large number of photos which give a glimpse of the life and works of Suraj Tiku.  In the last chapter the author has thrown light on various members of Tiku clan, past and present, who have significantly contributed to the art and theatre movement in Kashmir.
It may not be out of place to say that given the post-migration scenario in which the book has been written, Dr Tamiri has produced a gem of a book which will have a referral value for generations to come. The language used is simple and without unwanted cliche and technical jargon. The choice of photographs and paintings adds to the value of the book as a document tracing the evolution of art and theatre in Kashmir.