Do not Write A History Except that of Your Exile 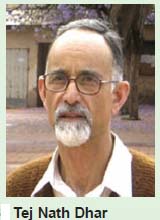 Mahmoud Darwish is one of the most notable Palestinian poets and prose writers, who has published over thirty volumes of poetry and eight books of prose. Named after one of the sections in it, Journal of an Ordinary Grief is the English translation of one of his major prose works. Though it is based on personal experience of the poet—about his arrest, his interrogation, and his imprisonment—it is also about the displacement of Palestinians, their pain and suffering, and their resistance against their oppression. Darwish always equated himself and Palestine.

The different sections of the book read like short meditations on the troubled existence of Palestinians. The first one is in the form of questions and answers, about a journey, in which people who have been deprived of their homeland traverse “the road of exile.” The ones who died for it “died from the virus of love.” Their “homeland surpasses Paradise: it is like Paradise, but it is also attainable.” The questions also relate to the attitude of usurpers, who “commit the crime, deny it, and when the victim confronts them they sidestep the question by talking of peace.” The search for the homeland is also for the lost heart, for “a place is not only a geographical area; it’s also a state of mind. And trees are not just trees; they are the ribs of childhood.” The account also punctures the falsehood spread by the Israelis that the Arabs sold their land to them. When the protagonist’s grandfather returned to his place, he was charged with “stealing into his own country.” Because people have been rendered homeless, grief flows from the pores of their skin and happiness comes only from the boots of fighters.

Darwish also writes about memory and history and the war of memories between the Israelis and Arabs. The former use the memory of the holocaust to justify their claim to the Arab land, but when the latter ask for their homeland they are denied their memory. They hardly realize that a homeland is not just a map, but a place of ancestors. In their state of homelessness, writing of history for Palestinians takes a different direction: “Do not write a history except that of your wounds. Do not write a history except that of your exile.” And the only way out for them is to fight: “When you fight back you belong. And the homeland is this struggle.”

The section on the ordinary grief reads like a poem. It is about being a 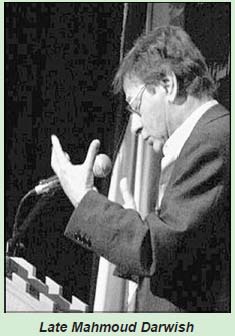 Palestinian, about arrests, trials, military tribunals, and the travesty of justice. People are made to realize “that philosophically you exist but legally you do not.” You are arrested even when you are “committing a dream” and because victory eludes you “you feel no longer a citizen. Your history is nothing more than dreams that are torn to pieces like a newspaper, and each dream is a disaster.”

Another section provides details on the Kufr Qasem Massacre which the Israelis justified by their philosophy of “Either be a killer or be the one killed.” It also reveals how the people involved in it were either pardoned or found guilty of a technical error and let off with a rebuke and a fine of one Israeli piaster.

Darwish writes lyrically about the beauty of his land, especially about Gaza. He also elaborates on the dichotomies starkly visible in the Israeli position, for it recognizes that “the state has a right to kill its own people and those belonging to other nations, but the individual does not have a right to fight for the sake of freedom.”

Darwish’s book is a must read for all those who want to know the pain of exile, the suffering of the Palestinians, and how and why the refugees are transformed into bombs.

*(The author is a prolific writer. His publications include History-Fiction interface in Indian English novel and under the shadow of Militancy: The Diary of an unknown Kashmiri.)