A Feast in Photographs - A Book Review

KASHMIRI PANDITS are a unique community in many ways. Their contribution to the fund of Indian civilisation at all times in history has been awesome. No community has played a role so disproportionate to its numbers as Kashmiri Pandits have. Yet their success has been their undoing. During the past 650 years the Pandit community has suffered immensely at the hands of forces of religious intolerance. Its shrines were desecrated and demolished and entire heritage vandalised. Still, much has survived to reconstruct the past story of Kashmiri Pandit-his history, culture, religious and social life etc. 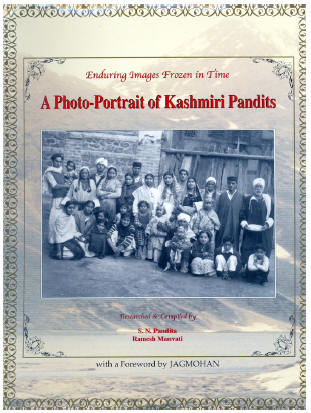 The peaceful years of 1819-1947 came as a breather in which persecuted Pandit community rebuilt its social life, free from fear and discrimination. Many antiquarian works were recovered and lost traditions revived. Despite sharing broader ethnicity with other social groups in Kashmir the Pandit community maintained its distinct social order. This is reflected in dress, language, cuisine, life-style, architecture, socio-religious life and world-view.

Religious-cleansing campaign in 1990 had two dimensions-one, to throw Pandit community out of its homeland and secondly, to enact cultural effacement to show that the Pandit community never existed in Kashmir. Destruction of shrines/residential premises, personal libraries, change of name-places, distortion of history and culture has been an extension of the latter. Most of the families were not able to retrieve even family albums. A Photo-Portrait of Kashmiri Pandits-Enduring Images Frozen in Time by Messers SN Pandita and Ramesh Manwati, two distinguished members of the community is a valiant attempt to put spokes in the campaign of cultural effacement.

A new generation of Kashmiri Pandits has grown up in exile. They have neither memories nor  nostalgia of living Kashmiri way of life in the ambience of Kashmir. Yet, it is this generation that has to don the mantle of leadership sooner than later to carry forward the movement for retrieval of homeland to its logical culmination. If this group remains detached from the experience of rich Kashmiri way of life how would it get connectivity with the homeland movement.

The authors seem modest in stating objectives in bringing out the album - to show the past face of the community and preserve the photo heritage. The rich collection or rare photographs, published in the album not only reflect the social life of Pandits but also indicate the pattern of social change over years. It also shows how Kashmiri Pandits value their history.

The photo-album focuses on almost all aspects of Kashmiri Pandit social life. In the section on residential architecture one comes across peculiar wood-work reflected in Dab, Vurusi, Daeri Damdar, Panjaer Daer, Kathkar, exquisitively carved main gate-door etc. The photographs dealing with costumes show the extent of change in dress over a period of time. Pattu Coat-Pyjama, Dastaar, Grass Pulhour, Pheran, Thaz Khrav, etc. all come alive in pictures. There is a photograph showing bridegroom and bride in Gangvyas and Mekha Paizar respectively.

The authors have laboured hard to procure photographs that look unique e.g. - Bridegroom on horse back with Pot Maharaza, child couples, Maharaza with Aelae Maal, Mekhala Maharaz with Zarbaf Lat etc. There was a reformist movement in 1925-1930, advocating strongly the case of widow-remarriage among Kashmiri Pandits. This was strongly resented by hidebound sections of Pandit community. The photo-album carries picture depicting solemnisation of one such widow-remarriage. Many old photographs dealing with Pandit marriage and Mekhala ceremony find space in the album. The authors have even managed to put in the album photographs on preparing Phak Chai and Waer. There are photographs on performance of Mahayagna. A photograph that one rarely comes across - Performing Partheshwar Puja is also incorporated.

Photographs depicting social life include rural women washing untensils/clothes on Yarbal, Rich Fruit trader with his retinue of employees, Puja around a spring asthapan, Kashmiri Pandits with their family Guru, Group outing to a religious place, anniversary function at an asrama, visits to a festival place and enjoyment in an old style merry-go-round, sheen jung (snow fight), basking in autumn sun in the angun, open air classroom, playing of school band. There are innumerable group photographs of staff and students of schools and SP College. The authors have also included a photograph of Rajkiya Pathshala, one of the oldest Pathshalas of Srinagar city. The photographs on treks to Gangabal, Sheshnag, Harmukh and Amarnath Cave are also included but display poor quality. There are couple of photographs depicting rural Pandits at work in their fields.

The section dealing with photographs of 1947 Tribal invasion is a feast to students of history on contemporary Kashmir. The photographs show the relief work being carried on by members of Pandit community to provide succour to victims of Tribal raid. One photograph shows Pandit lady volunteers undergoing training as members of national militia. There are also few snaps on taking out of Vidh Bhagwan procession on the day of Zaramasatam.

However, there are few glaring lapses. The authors have not provided captions, detailing the source, year and the personalities in the photograph. The photograph-Vivekananda in Kashmir as per circumstantial evidence could not have been taken by Pt. Vishnath Kampassi for two reasons. One, Swamiji had carried a photographer along. This is based on the premise that Swamiji's troupe took a number of pictures in Kashmir - all of  very good quality. Secondly, Pt. Vishnath Kampassi was a novice at the time of Swamiji's visit (1898)  with hardly 5 years experience. We do not have good quality photographs taken by Pt. Kampassi during the period 1893-1900 to substantiate a hypothesis that the photograph of Swamiji with Kashmiris could have been taken by Pt. Kampassi.

There is also strong possibility that this photograph was taken at Swami Ramji's asrama at Fatehkadal. It is a matter for investigation. The authors in their desire to document everything pertaining to Pandits' social life have stuffed the album with some extremely poor-quality photographs.

These blemishes apart, bringing out this excellent photo-album is a pioneering effort on the part of authors, guided purely by labour of love. Conscious of few drawbacks, the authors intend to rectify these in the enlarged second volume. They need fullest cooperation of the community.

Frozen in Time - A Photo-Portrait of Kashmiri Pandits