Jeet Ya Haar (By Balraj Madhok) 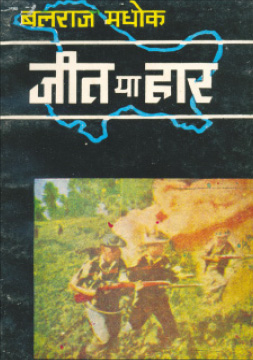 Jeet (win) Ya (or) Haar (Defeat) is a novel based on the Tribal Raiders’ invasion of J&K State in 1947. Its author Prof. Balraj Madhok claims that the novel is based on the actual incidents, events he had recorded regularly in his daily diary. Actual names of some characters have been changed to protect their identity as the novel was first published in 1953. Real incidents have been dramatized to give it the shape of a novel. Many of the events narrated by the author have been corroborated by independent observers who were witness to the era. Sh. Meher Chand Mahajan took over as Prime Minister of J&K State on 15th October 1947. His shrewdness, administrative capability and political foresight were well acknowledged even by his adversaries. His appointment unnerved Pakistanis who felt that their game-plan to grab Kashmir may run into rough weather with Mahajan at the helm. The Pakistanis were working overtime to create vast subversion network in the J&K State to prepare the ground for external invasion. They were trying to buy the loyalties of their co-religionists in state forces, training a section of local population for subversion in Jammu province. They were also dumping arms and ammunition in selective areas of Jammu region. All this was being planned meticulously, keeping the strategic details and the D-Day a top secret. While all this was being done the senior officers of State forces were kept in good humour that everything was hunky dory. Prof. Balraj Madhok’s well-written novel throws light on all this. It also covers the actual invasion and the author’s escape in the aftermath of invasion. Many canards were spread by his political adversaries to distort his role and twist events to suit them politically. A dispassionate history detailing the patriotic role of all those forces who worked overtime to see the Kashmir remains with India during those, fateful days still eludes us. ‘Haar’ Ya ‘Jeet’ will obviously help in removing many cobwebs of confusion and facilitate in reconstructing the authentic history of that phase. 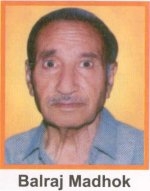 Prof. Madhok was among the first 15 RSS workers of Undivided Punjab. He stood first in MA (History) inPunjab University. He came to Srinagar in 1944 and was appointed Vice-Principal of DAV College. Prof. Madhok was also chief of RSS organisation in Kashmir. A dynamic organiser Prof. Madhok was able to create a group of 250 cadres in Srinagar within a few years. During his stay in Lahore he had also been working in coordination with RSS workers in Rawalpindi district, Peshawar, Hazara, Abbotabad, Lahore etc. Due to his contacts with Sh. Meher Chand Mahajan from Lahore days Prof. Madhok had direct access to higher-ups in Maharaja’s administration. As per Prof. Madhok’s testimony he harnessed all his contacts to unearth the invasion conspiracy even as early as 9th October i.e. 12 days before the actual invasion. Had his information been acted upon much of the death and destruction could have been averted. The Maharaja’s administration would have been on a firmer wicket to face the Raiders (read Pakistanis). But then these are ‘ifs’ and ‘buts’ of history.

On October 8, 1947 Prof. Madhok got the first clue regarding the intended invasion from Dr. SK Atri. A medico from UP, Dr. Atri had been practicising medicine in Srinagar for over two decades. He was an influential and a renowned doctor in the city. Some of his elderly Muslim clients who had po-Pak views had visited him in the evening of 7th October and requested him to leave Srinagar along with his family at the earliest because Pakistan would be invading Kashmir soon and members of the minority community would be soft targets. A little scared Dr. Atri took Prof. Madhok into confidence the following day.

During those days Punjab Muslim Hotel at Pratap Chowk (now called Lal Chowk) was known to be the rendezvous of Pak spies and agents. Prof. Madhok took a few of his top cadres into confidence and decided out a strategy to dig out more details about the Pak gameplan. He decided to utilize the services of some cadres who had come to Srinagar from Punjab and NWFP. Prof Madhok managed to infiltrate his confidents into Punjab Muslim Hotel. Within two days he was able to unearth major elements in the Pakistani conspiracy. He got precise details about how Pakistan was subverting loyalties of a section of the Maharaja’s forces. Many top officers at Civil and Military level were working for Pakistan. These included Col. Adalat Khan, Ch. Faizullah Khan, Wazir Wazarat Baramulla. Prof. Madhok also learnt that invasion was to come from the direction of Abottabad, the invaders were to include Pak army personnel in civies and Pathan tribesmen. The Maharaja was to be taken captive, and then Pakistan would make declaration aboutKashmir’s accession with Pakistan. Prof. Madhok says that soon after collecting this vital information he managed to convey it to Maharaja and Brig. Kashmir Singh, the Chief of State Forces. Madhok made a suggestion to disarm the section of state forces whose loyalities had raised a question mark.

Two days later Harish Bhanot, RSS Chief of Abbotabad reached Srinagar. After partition Bhanot had been working underground as a RSS activist in Abbotabad under the cover name of ‘Nawab of Boi’. He had links with top officials of Pakistan and had gathered vital information from them about the invasion. Before the cover could blow off Bhanot managed to reach Srinagarby Car. On 16th of October, Prof. Madhok apprised Sh. Meherchand Mahajan about the information brought by Bhanot. Prime Minister Mahajan in view of limited strength of state forces made a request to Prof. Madhok to lend his helping hand. On 17th October Brig. Kashmir Singh met Prof. Madhok and informed him that details supplied by the latter have been found to be true. The Brigadier also expressed helplessness of the government in acting upon the information in view of limited troops at its disposal. Srinagar had just one company, with loyalty of a good number of troops under doubt. Brig. Kashmir Singh also talked about non-availability of arms and ammunition (which used to come via Rawalpindi road) and petrol stocks. Three was no enough petrol for army trucks. Brig. Kashmir Singh’s another worry was that Col. Narayain Singh was refusing to accept the gravity of the situation as related by Headquarters. The Brigadier asked Prof. Madhok to send some of his own activists to Domel to convince Col. Narain Singh. Accordingly, Harish Bhanot was sent on

motorcycle to Domel on morning of 22nd October. At Uri he learnt about the raiders’ attack and returned to Srinagar in the evening. A few hours after Bhanot had left for Domel, Sh. Mangla Sein, a RSS Pracharak of Teetwal reached Srinagar. He informed Prof. Madhok about raiders’ attack on Muzaffarabad and told him that non-Muslims were fleeing towards Srinagarand Poonch to escape reprisals. Bhanot later joined Hindustan Times as a columnist and belonged to an influential family. He lives in Chandigarh. Mangal Sein later became leader of opposition in Haryana Assembly.

In the intervening night of 23/24 October, Maharaja’s ADC took Prof. Madhok to Maharaja’s palace in Srinagar. The Maharaja was closeted with his Prime Minister and Brig. Kashmir Singh. Sh. Meher Chand Mahajan talked about the grimness of the situation, aggravated by desertions in State forces. The Prime Minister said that his government expected Indian forces soon and asked Prof. Madhok to get his cadres so that they could be of help in maintaining order in Srinagar. At that time Brig. Rajender Singh was still holding on at Uri. While meeting was on the Maharaja telephonically ordered Brigadier to hold on to the last man and the last breath. On 24 October, Prof. Madhok collected 200 workers at the premises of Arya Samaj, most of them were college students. They were given two hours training in using 303 rifles at Badami Bagh. On 26th October, some groups of raiders had already positioned themselves around Shalteng. Prof. Madhok had gone to Badami Bagh Cantt to know whether Indian Army was coming in time or not. At 3 PMit was clear that Indian forces were expected any moment. Soon after this news NC and Communist Workers came out on streets of Srinagar for organising Civil Defence of the city. Same evening 200 RSS workers were put in 2-3 army trucks by Maharaja’s administration and despatched to Shalteng to hold back raiders till the time Indian forces landed in Srinagar. When the trucks reached Hari Singh High Street (Amirakadal) NC workers intercepted them. They searched the RSS cadres and found most of their rifle magazines empty. The NC workers thrashed them, telling them that raiders would lynch them within no time at Shalteng. The RSS workers were disarmed and asked to disperse. Later, a mischievous rumour was floated that RSS plan to create mischief in the city had been foiled. This mistrust later led to a bigger conflict, which paved way for Sheikh Abdullah’s dismissal in 1953. Prof. Madhok’s novel also makes a revelation that Maharaja cancelled his visit to Bhimbar on 20th October on the basis of information supplied by him. The Maharaja and his Prime Minister were on a tour of Jammu region to take stock of the latest situation. Pakistan, having come to know about it, had hatched a plan to attack Bhimber and take the Maharaja captive.