Literature as a weapon against colonialism

Home and Exile by Chinua Achebe.

Chinua Achebe has already established his rightful place in the world of letters. Apart from writing influential novels, poems, and short stories, Achebe has also written ground-breaking essays. Without being unduly loud, flashy, modish, or controversial, he has emerged as a critic of seminal importance, and has exercised considerable influence in shaping our response to post-colonial literature.

Home and Exile is his most recent book of essays, a published version of 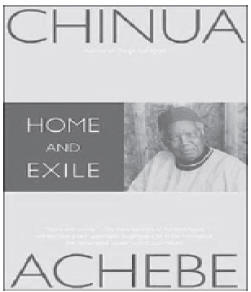 three lectures he delivered at Harvard University in 1998. They have a strong autobiographical flavour, because Achebe looks back on the significant moments of his literary journey right from his childhood days in his home inNigeria to his present state of exile in the USA.

The volume begins with Achebe’s life with his parents in their village, where his father returned after doing missionary work at several places. Since the home was under "imperial fire," his reflective gaze provides a clear picture of what it meant to live in a colonial setting. He contests misconceptions about Igbo people by calling them a nation and not a tribe. In pre-colonial times, Igbo villages and towns obeyed no king and no central authority; they were uniquely positioned to enjoy perfect autonomy, which was lost to them only after colonial powers imposed their ways on them  -  a clear rebuff to historians who wrote about their barbaric and undemocratic ways.

Achebe’s encounter with Joyce Carey’s work is well known by now. His re-telling of the incident, however, makes us understand that the likes of Carey exercised power over the minds of Africans because of their "absolute power over narrative." Basing their work on the "tools of try scholarly fantasies and pseudo-sciences," even the best of them created a shattering image of the inferiority of the African race, for which they deserve to be censured. This helped Achebe to understand that the innocence of literature is a myth, and one has to see its political implications with adult, mature eyes. However, he does not plead for any special theory of reading, certainly not the try post-colonial variety, though some of its proponents have used his writings in support of their views.

Achebe asserts that writers have not merely to write back to the Empire but also to fight it with spirit and conviction. He says that writers have to combat the "stereotypes of malice" contained in the writings of Europeans aboutAfrica, which left people with a "badly damaged sense of the self." The process of colonisation did not stop at exercising political control over people; it aimed at damaging their psyche by colonising their stories. The job of the post-colonial writer is to rescue narratives from the pernicious control of the colonials, by writing their versions, and thus asserting "the curative power of stories." With loving care and a sense of satisfaction Achebe traces the rise of the new African writing, and expresses his warm appreciation of the writers’ attempt to use their skill and imagination for erasing the misrepresentation of their people and infusing a sense of pride and a spirit of confidence in them.

Achebe’s greatest strength lies in his being firmly rooted in his soil and with his people, even though he is not always among them. He disparages writers who uphold the idea of universalism in art, because it virtually implies accepting and imitating western culture and civilisation. Africa does not need "copycats but those able to bring hitherto untold stories, along with new ways of telling."

Because of his concern for one’s place and clime, of pride in one’s cultural moorings, Achebe is critical of writers, even the ones with firm reputations, who do not respect this: of Buchi Emecheta, who self-avowedly minimises her "Africanness" to do well in the global market; of V. S. Naipaul, for writing dark and unwholesome books on India and Africa, which Achebe considers "pompous rubbish"; of Salman Rushdie, for saying that "literature has nothing to do with a writer’s home address." Quite understandably, Achebe writes warmly and approvingly about R. K. Narayan, because he "invested in India; he did not take himself out."

For the same reasons, Achebe does not approve of "expatriation and exile as intrinsically desirable goals." These may be fashionable, but may not produce good writing. Implicitly, he also suggests that the Empire has not to be fought with mere words, with verbal pyrotechnics or flourishes of style, but with one’s strength, which derives from one’s place and culture.

To sum up, Home and Exile is a very readable, wise, and fruitful account of Achebe’s growth as a writer of uncommon sanity and exceptional clarity, which sets him apart from both European and non-European writers. He affirms the importance of the narrative as a powerful weapon of defiance, but stresses that it has to bear the imprint of a writer’s social and cultural bearings and not of spurious and fashionable ideologies of western supermarkets. He is particularly hard on deracinated intellectuals whose espousal of universal culture and values does not augur well for the future of less privileged societies, because it threatens them with new and subtler kinds of colonialism.