Crisis in Kashmir continues to defy solution, not due to complexity of the problem but because the Indian political leadership has allowed itself to become prisoner of myths, assiduously promoted by the vested interests inimical to Indian interests in Kashmir. Such expressions- 'Maximum autonomy, short of secession', 'Sky is the limit', 'dialogue within the framework of Insaniyat', 'borders are irrelevant', 'we have to give something to Kashmiris to address their alienation and accommodate their aspirations", etc. indicate how the separatists and their apologists in Indian civil society continue to dictate the discourse on Kashmir.

Kashmir problem has three dimensions one, it is part of nonsecularisation of 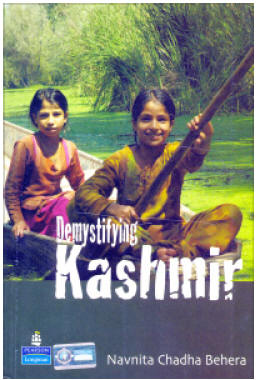 Indian Muslim Community. If in Kashmir it manifests as secessionism, elsewhere it presents as cultural separatism. Legacy of two-nation theory, pursuance of religious identity politics by the Valley's political leadership, rise of Jamaat Islami as a significant force and the impact of global Pan-Islamism have not left Kashmiris untouched. These processes have acted as a brake on the process of secularisation in Kashmiri Muslim society. How a weak secular society be a willing partner in secular nation-building? Many solutions that are being flaunted would ultimately strengthen communal consciousness in Kashmir and further deepen alienation. Kashmiri alienation is actually the manifestation of a weak secular consciousness.

The second dimension is the issue of crossborder terrorism, directly sponsored by Pakistan. As long as Pakistani Military-Civil oligarchy continues to visualise Pak security in terms of bleeding India how can there be peace with Pakistan. Whatever may be the compulsions for the latter to remain engaged in 'peace process', there is as yet, no evidence about a paradigmal shift in Pakistan's approach. Countering Pakistan's proxy war adequately and building strong deterrents to immobilise internal support structures of subversion in Kashnmir remain India's best options. Weak signals emanating from Delhi thatIndia was willing to accommodate Pakistan and Kashmiri separatists 'for the sake of eternal peace' would convey that terrorism pays.

Lastly, it is the internal dimension that has received little attention, both by the scholars as well as the Indian political leadership. Kashmir has been projected as a problem between Kashmiri Muslims and the Indian state. Plurality of the state, where other communities strongly opposed to secessionism outnumber Kashmiris, is overlooked. J&K is treated as a homogenous entity and Kashmiris as a monolithic group. In the past the Central government would reach a settlement with a section of Kashmiri leadership and leave the people of state to their own fate. This only worsened the situation. By addressing the internal dimension the Centre can facilitate the return of peace but also help keep external interference at bay.

'Demystifying Kashmir', authored by Navneet Chadha Behera breaks new ground by dissenting from the myths woven around Kashmir imbroglio over the past two decades. The book's main value lies in that it tries to grapple with the internal dimension in a way that has never been attempted before. The author makes two profound statements. One, 'the deeply plural character of J&K society is at the heart of the secessionist movement in the state and helps to account for secessionist demands as well as failures'.Secondly, Chaddha warns that while addressing the alienation of Kashmiris, one should not lose sight of the political aspirations of other communities as well. She says, "They had a great deal to do with the failure of the Kashmiris' secessionist agenda in the 1950s and the 1990s and are a critical factor in shaping the future peace process". Since 1947 the Valley leadership has been successful in manipulating a political dispensation that has effectively marginalised non-Kashmiri regions of Jammu and Ladakh, besides Kashmiri Pandits and Gujjars. This has weakened the nationalist response in the state. The Centre has been more willing to listen and accommodate the interests of Valley's political elite. Even today, be it the issues of delimitation of constituencies or the solutions that are being peddled the patriotic groups continue to receive the raw deal.

Navnita Behera has quoted extensively from history to show how Kashmiri leadership has been pursuing hegemonist and sectarian policies. She remarks that the National Conference had sought the status of an autonomous republic in the Indian Union to safeguard and nuture the interests of Kashmiris. But reversing the logic in J&K Kashmiris the majority community were reluctant to share political power with Jammu and Ladakh...“Sheikh Abdullah was not prepared to concede to Jammu and Ladakh those very rights and privileges that he himself had demanded from the Indian state, which were not to be interpreted as a step towards separatism but as a 'mutual accommodation of each other's viewpoint".

The Constituent Assembly (dominated by NC) had created a unitary state with a clear concentration of powers in the Valley through disproportionate representation in both the constituent Assembly and the State Assembly. In 1951 in 45 out of 49 seats Praja Parishad contested the nomination papers were rejected on flimsy technical grounds, "thereby subverting the democratic process and denying Jammu a voice in shaping the future political system".

Secondly, constitutionally and politically the state had no systems of checks and balances. The slogans of despotic regime - 'one party,' 'one leader', turned "Parliamentary democracy, resting on the principle of majority rule, into a 'Kashmiri rule.' Chadha remarks, "The Unitary state structures and parochial policies of the NC government favoured the Valley in political, economic and administrative matters, leaving Jammu and Ladakh feeling neglected and marginalised, and prepared to seek separation from the Valley".

Breaking up the Hindu-majority district of Udhampur, Opposition to rehabilitation of refugees from PoK, imposition of Urdu in Jammu and Ladakh, closing down of Sanskrit Research Department etc. by the Sheikh Abdullah regime soon after 1947, have been quoted to show how NC pursued sectarian politics. Ladakh too bore the brunt of communal governance. Chadha records, "The studied indifference of the state government in transferring Zanskar to Leh tehsil was in marked contrast to its willingness to grant Doda the status of a separate Muslim-majority district in the Jammu region". No allocation was made in the first budget for Ladakh's development, the region had no separate plan until 1961. Sheikh Abdullah began differentiating between the "Muslims and non-Muslims of the State" - 'It is the Muslims who have to decide accession with India and not the non-Muslims as the latter have no place in Pakistan and because their only choice is India..."Chadha observes," His conception of the Kashmiri identity had changed from "the people of J&K state" to mainly the "Kashmiri Muslims".

Institutionalised discrimination against Jammu and Ladakh forced these regions to raise demands for regional autonomy. Instead of responding to their legitimate grievances, the Valley leadership "sought to undercut the political base of groups demanding regional autonomy by creating alternative political alignments along communal lines". The author indicts ‘secular, progressive’, GM Sadiq regime for sowing seeds of communalisation in Ladakh in 1960s. She says," to scuttle this movement (for regional autonomy), Chief Minister GM Sadiq promoted a new leadership of lamas by favouring Kushak Thiksey over Kushak Bakula and at the same time promoting the Muslim leadership of Kargil over the Buddhist leadership of Leh...Sheikh Abdullah's decision to divide Ladakh into 2 districts in 1979 - Leh and Kargil-created yet another communal faultline in Ladakh, between its Buddhist and Muslim identity" Chadha dismisses Hill Council, saying it has failed to adequately address local issues.

The author has situated political assertion of regional identities in a historical and sociological perspective. On the issue of Displaced Pandits she exposes the RAC (Regional Autonomy Committee) appointed by NC government in 1996 by arguing, "The committee simply disregarded the Pandit's demand for Panun Kashmir without offering an alternative strategy or framework for redressing their grievances and securing their social, cultural, economic and political rights".

Initially, though Gujjars gained political prominence when Sheikh Abdullah tried to rope in the Muslim majority districts of Rajouri and Poonch and the Kashmiri-speaking Muslims of Doda into a "Greater Kashmir" in the late 1970s. Patriotic Gujjar community was then given short shrift by Kashmir-dominated State governments. ST status was not given to them until 1991. As a result, Gujjars are now entitled to representation in proportion to their population in the legislature, local self-governing institutions, government services, and professional and technical institutions. Since Gujjars live in hilly areas, the community can be given effective representation only by carving out Gujjar dominated areas as Hill Constituencies. Their demand for reservation of constituencies, to which they are entitled, is also not being acceded to. The Gujjars fear threat to their interests from patronisation of Paharis by Valley leadership.

The author has done good homework to expose the designs behind the demand for Autonomous Hill Council for Chenab region. She remarks, "Critics view the demands for councils by the Muslim-majority districts of Rajouri, Poonch, and Doda as part of a larger plan to break Jammu's plural identity and reinforce the communal faultline within the Jammu region.Their claims are in part driven by the desire to undermine the influence of the Gujjar and Bakkarwal leaders in the region..Perhaps that is why the Gujjars do not support the demand for an Autonomous Hill Council for Rajouri and Poonch".

Chadha is scathing in its indictment of NC government appointed RAC - "the committee sought to protect only the "Muslim interests" to the total exclusion of other ethnocultural, ethnolinguistic and ethnoreligious minorities. While it was ready to lean backwards to accept the demand of Jammu region's Muslim minority for separate provincial status, it did not even mention the demand of the Hindu minority in the Valley-Kashmiri Pandits- for a Panun Kashmir...Nor did it take notice of the Zanskar Buddhists long-standing demand for these areas to be brought under Leh's administration. Likewise, it glossed over the fact that Doda district had a significant Hindu minority alongside its Muslim (58%) majority and made no provision for safeguarding the minority's political interests".

Arguing that attempts to superimpose communal boundaries would be divisive the author visualises solution 'in providing a responsive government, rather than a sharpening the communal boundaries'. Strongly advocating that power sharing be inclusive, Navnita Chadha recommends that 'It is imperative for the Central government to reach out to the minority communities in the peace process and ensure that their political interests are safeguarded in any final settlement". It is too early to say whether Round Table Conference would deliver anything to non-Kashmiri groups and other minorities. Anyway,'Demystifying Kashmir', is bound to provoke debate on strategic blunders the Indian political leadership continues to commit in Kashmir.