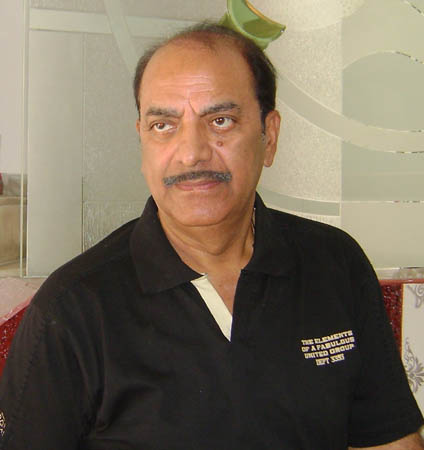 A Kashmiri displaced from the Valley as a physician, Dr. Roshan Saraf didn’t take long here in being seen as a talented person, precisely as a man of letters. An artist by taste and temperament, he has a melodious voice, sings tunefully and composes verses both in Kashmiri and English. Just a few years back, he brought out his book of Kashmiri lyrics under the title Lola Osh and thus carved for himself a place among the contemporary Kashmiri poets. Now he has made his debut as a thoughtful writer of English verse with the publication of his book titled Rythmic Verses, that is being released at this function. In my view the book in question is welcome as a creative piece - attempted by an Indian aspirant writing in English. There is evidence in its contents of the author’s promise and potential accompanied by actual accomplishment. Before I go into the contents of the volume, I should like to caution the prospective readers not to expect rounded perfection and formal finish from a writer who has something original to convey in English as a second language and so chooses to forge his own instruments of communication under an inward compulsion. He has obviously not had any standard classic models in view.

Dr. Roshan Saraf has a sane and balanced outlook on life. He has a mind of his own; he presents his point of view on men and matters, and on situations- in fact on whatever happens around him in his day-to-day life. Rooted emotionally in his native Valley, he is aware of his rich cultural heritage as a Kashmiri and cherishes the age-old values associated with it. Nostalgic and anguished no doubt, all that he says is free from any rancour or bitterness. This is clearly reflected in the seventy-two pieces of written composition he prefers to call rhythmic verses rather than poems. He has written on a wide variety of topics; the titles of the individual poems are thoughtfully conceived and appropriately worded. As I have noticed, several titles occurring sequentially or otherwise have a thematic connection and can thus, as such, be studied as a group. As we discern this connection, we can list the broad themes touched upon in the volume. A major theme is that of the displacement of the Pandits from the Valley, the pain and agony it has caused them - what is forcefully articulated in some of the pieces.

I would now turn to a few poems and quote select lines from them for illustrative support to some of the observations I have made on the contents of the book. I find the poems titled ‘ Home sweet Home’, ‘Rustic Valley’and ‘Retirement’ thematically related. The poet conveys his deep sense of pain in these lines from ‘Home Sweet Home’.

The Rome I built brick by brick was smashed and

within a jiffy carved nest dismantled and rubbled by

rough ruffians in a felonious fit.

There was a sudden drift in behaviour and attitude,/Friends of yore became foes rude, and crude,/love and affection was torn to shreds....

Similar feelings find expression in these line from the poem titled ‘RusticValley’:

There blew a hurricane and erupted a rock

the valley saffron became a market of cadaverous merchandise

This is further how the poet bewails the lot of the displaced Kashmiri Govt, employees who had to leave the Valley for fear of life, retire virtually from service and live on ‘relief here as migrants (lines quoted from the poem‘Retirement’:

A dirty tag, a torn flag on his shabby tenement/an ethnic curse crushing every fragment, a native in his own land, labelled a migrant/still in service but Alas! in retirement.

Several poems are obviously religious in content. The poet himself is known to be deeply religious, in fact an ardent devotees of Bhagavaan Gopinath Ji. The very first poem of the volume is titled “His Majesty”. It is wholly devoted to Bhagavanji; the poem is, in fact, a successful portraiture of the Bhagvan as an embodiment of divine qualities, at-once an august, lovable and awe-inspiring figure. This becomes evident from the lines cited below:

An eternal flame erupting from everywhere,

touched this planet to absolve the miseries and to care.

I saw a shining sun with dazzling elegance

glittering on a face in its absolute glory.

I saw a fabulous lotus blooming in its excellence/glittering on a face in its absolute glory.

Dr. Saraf has devoted one piece titled “The Frozen Beauty” to the ice-lingam formed naturally in the holy cave of Amarnath.

Here are the lines in which he makes us visualize the upward march of the pilgrims and devotees come from far off places:

Devotees from far and wide

walk the treacherous paths on foot and ride,

with mace on their shoulders and head in rhythmic nod

young and old, week and strong on a compassionate prod.

These are the concluding lines of the poem:

he in trinity is the universal saviour

he with “Shakti” is the sagacious governor.

Within the short space of this note, it is not possible for me to discuss, even briefly, the over-all content of the volume in question. What I have noticed on going through the poems is that Dr. Saraf has a fund of English vocabulary at his command including terms drawn from his professional vocabulary. I am sure he writes knowledgeably too when he describes or narrates experiences. What is important, however, is that he should be able to bend language to his needs; when he deviates from normal language use, it must strike us as really creative and not just violating the norms. He has, no doubt, performed a painstaking and praiseworthy job in producing and publishing the present volume. He should not, however, rest on his laurels. A sizeable number of poems contained in the volume are fine and all right. But there is a noticeable unevenness in the volume as far as the over-all quality of the poems or the flow of language is concerned. The author needs to refine his tools and hone his materials. I hope he doesn’t continue to be averse to adopting the free-verse form in vogue today and now onwards 1 believe he will aim at writing clean English as far as possible and desirable.

His book Rhythmic Verses is, of course, welcome.

*(This paper was read out by the author at the book release function in Jammu.)