For over twelve centuries Trika Shaivism has remained a dominant creed in Kashmir, influencing almost every aspect of social life of Hindu society of Kashmir. Its rich legacy reflected in philosophy, folklore, aesthetics, literature, art and architecture, rituals, place names, surnames, even food and dress etc. is a proof of it.

Philosopher Vasgupta was the first to enunciate principles of 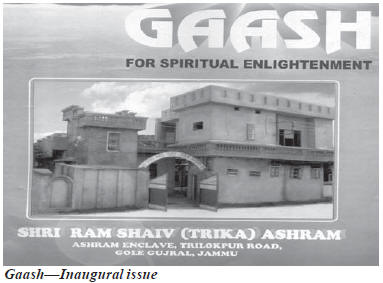 Kashmir Saivism to fashion an ideological response to Buddhism. The latter had held strong sway in post-Kushan Kashmir. Further contours were defined by Bhatta Kallata, Somananda and Utpaldeva. It was Abhnavupta who codified it as a complete world-view.

Such outstanding scholars - Kshemaraja, Jayaratha, Yograja, Madhuraja, Vardaraja etc. wrote exchaustive commentaries to make the tenets of Kashmir Saivism intelligible to the people. The last in this line was Sivopadhyaya, the author of commentary on Vijnan Bhairava. He lived in 18th century, in the times of Pathan Governor Sukhjiwan Mall.

The place of pride, however, goes to Lalla Yogeshwari, the great 14th Century Saintpoetess of Kashmir, who brought Saivite message down to the common man, from elitist discourse. She has been described as a Saivite Yogini, who used the native language and idiom to versify the Saiva ideals. For this remarkable contribution she has not only been hailed as a great Saiva scholar but also as one to whom Kashmiris feel indebted for giving life to Kashmiri language.

Her appeal transcended class and community.

How has Kashmir Saivism been able to maintain continuity, despite adverse conditions, with its appeal remaining all pervasive? The corpus of Saiva literature, both historical and contemporary, is silent about the institutions that perpetuated Saiva creed over centuries.

Unfortunately, philosophy of Saivism rather than its social dimensions have remained the main focus of the native as well as foreign scholarship.

However, there are stray references which indicate that Saivite tradition found its continuity through the institution of mathika, a Saivite asrama. Mathika maintained and established the traditions of a guru-sisya (guru-parampara).

As per Dr VN Drabu, the author of Saivagamas, the mathika accommodated the viewpoints of its different sisyas who came from all orders and varnas of society. These mathikas preserved the unbroken tradition of the guru and the disciple.

Madhuraja, the famous South Indian Saivite, who visited Abhinavgupta's asrama, has left for us an interesting account of this in his Gurunath Pramarsa.

It is likely, on the basis of circumstantial evidence, that at no time in history the institutions that perpetuated the Saivite tradition faced collapse. It is safe to speculate that these institutions changed forms and methods of functioning from time to time, depending upon the exigencies required. Saint-poetess Lalleshwari did not turn to Saivism just because she was wronged by her in-laws. This hagiography has sought to suppress the well-organised gurusisya parampara which functioned so well, where even common woman had all the freedom to take to Sanskrit and philosophy.

Had guru-sisya parampara been dead during late medieval times how could social milieu give birth to Sivopadhyaya? Bhaskar Razdan, to whom we owe first written collection of Lalleshwari's verses, lived in 17th Century. He was an ardent Shaivite and a good Sanskrit scholar. So was his grandson Manas Ram. Balak Bhat of Bulbul Lankar, who lived during Pathan rule, had written a commentary on Sivasutravali of Utpaldeva.

Anand Pandit, the great scholar of Grammar, Rhetoric, Sanskrit etc. was a direct descendant ofSivopadhyaya. He was a resident of Purushyar and lived in first half of 20th Century.

The intention in taking recourse to history is to emphasise that Saiva institutions of 19th and 20th Century Kashmir did not emerge all of a sudden.

Gaash, the inaugural issue brought out by Shri Ram (Trika) Shaiv Ashram (Fatehkadal), Gole Gujral, Jammu to commemorate the 150th birth anniversary of the great Saiva Saint-Scholar, Swami Ramjoo, has filled an important gap in historiography of Kashmir Shaivism. It is a pioneering effort on two counts. One, it shifts the focus from philosophical to social dimensions of Kashmir Saivism. Secondly, for the first time an attempt has been made to present rich biographical material about Saiva saints of 19th and 20th century. The editor, Shri Upender Ambardar, an ace researcher himself has done a commendable job to reach out to the families associated with these great saints.

Gaash carries four articles on Swami Ramji, two on Swami Govind Kaul Jalali, one each on Swami Vidyadhar Ji, Swami Gash Kaul Jalali and Late Kashi Nath Kaul. The other 4-5 write-ups deal with philosophical aspects about which there is no dearth of literature. There are also excellent photographs of the Saints in this magazine. The Ram Shaiv (Trika) Ashram was established in 1884.

The popularity of these Saiva Saints was partly due to their teaching of Saivism and partly because of Tantra Vidhya that they practised. The miracles attributed to these saints reflect their mastery over Tantra Vidhya. Common people felt relieved while bringing their tales of woe to these saints. Others flocked to the ashram saints in search of spiritual quest.

It was at Swami Ram Ji's insistence that Pt. Narayan Das Raina named his son as Lakshman, the former initiated him into Saivism. His outstanding contribution to Kashmir Saivism has been in making Kashmir Saivism known internationally.

At Ramji's advice Mehtab Kak was appointed his tutor. Swami Vidyadhar Ji took Saivism to rural masses through his extensive travels in the countryside.

Tarawati of Tral etc. His ashram is presently located at Paloura, in Srinagar it functioned from Karan Nagar.

The essays in Gaash do not tell us much about Lala Joo Kokroo, Mansa Ram Monga, Ishwar Joo Shair, Ishwar Joo Handoo - the illustrious predecessors of Swami Ram Ji. All of them had played good role in grooming him up. There are no references to such great Saiva scholars of 20th Century - Ram Joo Saudagar, Janki Nath Bakshi, Moshar Razdan, Ramjoo Kokiloo, Pt. Shivji Bhat (fatherin- law of PN Bazaz) etc. Ramjoo Saudagar was trained in Saivism by Swami Ramjoo, Initially, Swami Ramji had asked Ramjoo Saudagar to teach Saivism to Swami Lakshman Joo. Somehow, Lakshman Joo felt more comfortable with Mehtab Kak. Since later was not good in teaching, the job was ultimately assigned to Pt. Moshar Razdan of Bana Mohalla. Late Moshar Razdan was a Saivite scholar par excellence.

In Gaash there are conflicting versions on how Swami Ram Joo's wife and his son died. Sh SK Mam in his essay 'Swami Ramjee - A Perfect Siddha', says Swami Vivekananda met S w a m i Ramji at his Fatehkadal Ashram in 1892. As per Pt. Dina Nath Yaksha Swami Vivekananda did not meet Swami Ji. He quotes Vivekananda (In Eastern and Western description) 'I missed to see Fatehkadal Saint. Swami Ramjoo did not go to meet anybody. He had free will, was Swantantra Vadak unlike Paramahans who addressed with emotions'.

Kashmir Saivism will continue to survive. Some of the best scholars of Europe are presently engaged in conducting research into its various aspects. Their better methodologies would lead to important breakthrough in Saiva research in near future. Gaash can play a good role if it can help in collection of local Saiva lore of 19th and 20th Century by reaching out to all those people whose families were connected with Saiva Ashram/Saiva Saints.