A Review of Ugly Kashmiri

The book under review "Ugly Kashmiri" written by Arvind Gigoo can hardly be described as a book. For in good measure, every page has ten words. Maximum is fifty words. In each of the words, however, Arvind Gigoo weaves irony and satire. He tries to be artistic and pursues rigorously to create, and suggest a new idea.

In the first place, the title of the book "Ugly Kashmiri" is 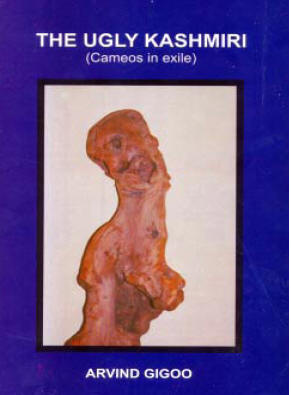 in itself quite provocative. The author leaves us in no doubt that he wants provocation because it is done on purpose.

Arvind Gigoo cannot be faulted on that score. Political correctness comes with eager to please attitude and ideological blinkers owes its origin to be different. Hence to please and provoke is double edged weapon which the author of "Ugly Kashmiri" employes.

The author also tries hard to be outsider but in the end is an insider who tries to be an outsider.

Arvind Gigoo weaves intellectual energy to surprise and in some measure succeeds to surprise and astonish. The book has its moments but those moments are tarnished by surprising conclusions. Perhaps, Arvind Gigoo has read too much of English literature, where barring exceptions like Shakespeare, wit takes precedence over depth. But underlying theme of Gigoo's cameos is to inject word with depth.

Some of his cameos reveals his depth. For eg. on page no: 90 Shri Bhat "your highness, please get my brothers and sisters back" Zainallabdin "The boon is granted. My descendants will take care of them." But he is quick to balance by this another breezy cameo.

"What is culture"? Tell me something about your culture" "Himm.....I am leaving for Maharashtra.

To trivalize events and tragedies is a weapon which A. Gigoo employees too frequently.

For instance What now? See you in Panun Kashmir.

If Mr. Gigoo tries to weave allegary in the above cameo then he has failed miserably. For in the context of art, author is duty bound not to leave sentence in a suspended animation and leave it to reader to find the meaning.

The golden rule for the wit to succeed is that it should be conveyed as an understatement but here in ugly Kashmiri author tries too hard to succeed in his mission.

I know my worth says Jean Paul Sartre in his autobiography "Words". To the author's credit words have been arranged to reveal a metaphor but in a figurative sense only. He also weaves events, experiences to project a ideology where author believes in nothing. He tries to comment but is not firm in his convictions that is one grey area of the book.

The author leaves blank space for the cameo "address".

But fails to comment upon who snatched his address. One of the cameos reads as following.

Renaissance "We must preserve our culture" "How?" "By reviving dead rituals".

Here, Arvind Gigoo, much in the manner of Marxists tries hard to look progressive and forward looking. But progress does not mean forgetting one's culture.

Had Kashmiri Pandit forgotten his rituals he could not have remained a one. The author surely knows this. But the purpose of art for the sake of art in underlying theme of Ugly Kashmiri.

Arvind Gigoo does not spare even Kashmiri Muslims as is revealed in his cameo "clipping" on Page No: 63. It is a telling comment how Muslims associated with national conference issued written statements in the press that henceforth they have nothing to do with party.

Here is how it reads.

This is for the information of all that all the members of our family had lost the balance of mind. The mental disease we suffered continued for 48 years. We were associated with a political party. Actually, we have realized now that we were mentally sick We...children and all....

It is these cameos which are redeeming features of the book of cameos.

It is hard to over criticize the book for the author himself leaves us in no doubt that it is provoked people that he is after.