At long last late Soom Nath Sadhu's dream has come true. The anthology of his plays 'Zah rang', the title he himself had chosen, has seen the light of the day. Recently, the book written in nastaliq Kashmiri, was officially released at a simple function, organised by FUNKAR organisation. The book was conceived by the late artist in 1981. He had even paid advance money to Mohd. Yosuf Miskeen of Radio Kashmir, for its publication. Pt. Soom Nath died on October 5, 1982 but Mr. Miskeen did not pursue the task assigned to him. His wife, Mohini Channa and son, Rajiv Sadhu, despite all odds, did not lose heart. Mrs. Mohini, however, gives all the credit to Rajiv, saying, "This is all due to the tireless efforts of my son". The anthology, includes such well-received plays : Chapath (slap), Yih Zahar Kus Cheyah (who will swallow this poison), Janki, Zah Rang (two colours), Riyazun Mol (Riyaz's father), Grand Rehearsal, (grand preparation), Rehearsal, Bah Chus Choor (I am a thief) etc. There are a total of eleven plays. 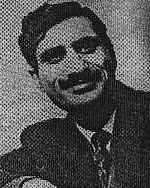 Late Soom Nath Sadhu had a proud lineage. His father, Prem Nath Padesi, an all-time great artist of the state had earned death warrant from Pakistanis, for using radio as an effective medium to counter their poisonous propagand, during the tribal-raid. It was Pardesi, who had scripted the slogan "Hamlavar Khabardar, Hum Kashmiri Hai Tayar". This became the slogan of resistance, put up by Kashmiris, to defend Srinagar city against Pak invaders. Sadhus belonged to Malik Aangan, Fateh Kadal in the down-town Srinagar.

Som Nath Sadhu was the eldest among the five children. He was pursuing his Masters in Science at Agra, when he received the news of his father's death. Soom Nath left the studies half way to look after his family. He joined Radio Kashmir as a copyist in 1955, on compassionate grounds. He had to support a big family and look after his three sisters and a brother. He was already engaged to Mohini Channa when his father died.

It was the famous feature programme 'Zoona Dub' which brought Soom Nath Sadhu into limelight. It also drew the best out of him. 'Zoona Dub' feature programme was started in 1966 as the state administration was quite keen to know about the public grievances and redress these promptly. Late SN Sadhu put his heart into the programme and worked very hard. He was its Central character, 'Aga Saab'. His wife Mohini recalls, "I must confess I failed to understand him. He was a unique person, a superman. He worked tirelessly for making 'Zoona-Dub' a very successful programme, which would strongly reflect day to day problems of the people. My husband would work till late hours of mid-night, for conceptualizing the following morning's Zoona Dub. If  Idd was announced suddenly he had to change the programme already recorded and there would be live recording. It would take him just fifteen minutes to think about the change.

Soom Nath Sadhu knew well if 'Zoona-Dub' was to be a people's programme, then he had to be among the people to know how do they think. He would go and stand near the pavements of shops. Soom Nath would visit ration ghats to record the impressions of the people about rations supplied to them and also the feelings of boat-women. In Pandit marriages, he would never miss Mehandiraat. He would sit among ladies to record their feelings.

Though 'Watalbuj', a predecessor of Zoona-Dub was also his production but it was the latter through which late Soom Nath Sadhu is known. He was awarded 'Padam Shri' for this programme in 1974. Started in 1966, the serial'Zoona-Dub' went on uninterrupted till his death in 1982. It continued for a few more years after his death. But 'Zoona-Dub' after his death looked like a caricature of the old programme.

Soom Nath Sadhu was a wonderful husband too. His wife recalls, "Once I felt the close working of my husband with Mariam begum, Aga Bai would affect my married life. I conveyed this to him. He laughed and said, "I have transcended these relations. It is just only for programme that we are Aga Saab and Agabai". To allay my apprehensions, he took me to "Radio Kashmir" to show how the programme was being recorded. I was still not satisfied. He took me again a couple of times till I was convinced".

How others particularly the artists who worked with him in 'Zoona-Dub' thought about him? Rajiv once asked Mariam Begum what she thought about his father. She replied, "Nah Voth Tiyuth Kahn, Nah Vathih Tiyuth Kahn" (There has been no parallel to him uptill now, nor there will be any in future). Nazir Sahib, his son in 'Zoona-Dub' had gone to see him at AIIMS, New Delhi. Nazir said to him, "Sadhu Sahib, toih chuv kahfi kamzor gamaet (Sadhu Sahib, you have grown very weak"). The great artist with his superb wit replied.

"Dazanas lagih kamiya kaal" (It would take less time for cremation). Soom Nath Sadhu was just 47 years of age when he died.

Soom Nath was a man of great talent. He tried his hand in Afsana writing and films too. His Afsana "Yeli meh tie laej" (When I wore a tie) was well-received. He acted in Kashmiri films "Mehandiraat" (Manz-iraat), "Mehjoor', and "Doctor Zero", produced by Doordarshan Srinagar in mid-1970's. He toured many countries and had a stint in CEDO Institute, London in play-writing and production. In 1971 he was awarded 'Sadiq Memorial Trophy' by J&K Government.

SN Sadhu was extremely fond of "Chakri". His role in Ladakh as Director Radio Kashmir, Leh, was that of a pioneer in Ladakhi cultural renaissance. Before he took over Leh station would just relay Hindi film songs. There were no indigenous programmes. Soom Nath Sadhu worked hard to search for local talent. He translated many programme on different themes, including information on agriculture, in the Ladakhi language, to make the local radio meaningful for the people. It was a revolutionary step. At the time of his death, he was serving as Director AIR External Services.