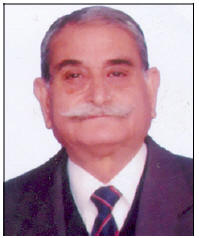 THE Antartica Hero, affectionately known to his large circle of friends and admirers as 'DOD', left for his heavenly abode, on 18/2/2008, after having suffered a sudden brain haemorrhage, on 10/2/2008. His untimely and tragic demise has left all his relatives, friends and colleagues dumbfounded and heartbroken. Fondly known by different names- 'Baba', 'Babuji' and 'Kaul Sahib', he was a karmayogi, an extraordinary human being par excellence, a scientist of limitless talent and courage.

Born on 9th May 1940 at Bagh Jogi Lankar, Rainawari, Srinagar, Shri Kaul passed his M.Sc. Geology in 1961. He served Indian Bureau of Mines from 1962 to 1965 and Geological Survey of India (GSI), thereafter, till his superannuation on 31st May 2000, as Director (Selection Grade).

During a span of 39 years of active service, he was engaged in geological, glaciological and mineral surveys in J&K and HP Himalaya and on the icy continent of Antarctica. He was trained in Mountaineering from Himalayan Mountaineering Institute, Darjeeling, in 1968 and in skiing from the Indian Institute of Skiing and Mountaineering, Gulmarg, in 1973. Shri Kaul was the member and also the leader of several multidisciplinary and interdepartmental scientific expeditions which included expeditions to Nun Kun, and to Rulung (Ladakh) and Nehnar glaciers in J&K, Gara, and Gorgarang glaciers in Kinnaur, HP and to Antarctica. Particularly noteworthy was his role as the leader of successful fifth Indian Expedition toAntarctica (1985-86), organised by the Department of Ocean Development (DOD). He was one among the veterans whose vision and endeavours culminated in the birth of the National Centre for Antarctic and Ocean Research (NCAOR) at Goa. He was a member of several committees of DOD and NCAOR and Indian National Committee for SCAR (Scientific Committee of Antarctic Research).  He attended several National and International Conferences and made valuable scientific contributions to Indian and Foreign journals. As the Editor of the publication 'Inventory of Himalayan Glaciers'  - a contribution to the International Hydrological Programme (Tech. Pub. No: 34, GSI), he contributed significantly to an endeavour which was the first of its kind in the Asian region. Based on his scientific achievements,, he figured in "Reference Asia (Asia's Who is Who of Men & Women of Achievement-Volume Fifth-1989)".

Shri Kaul's invaluable contribution to the study of Himalayan glaciers and Antarctic Sciences will ever be admired by future generations. In recognition of his distinguished services, Shri Kaul received the prestigious 'National Mineral Award (1987-88)' from the Govt. of India.

As an individual, intensively human person, sublime simplicity, helpful attitude, sweetness of temper, soft-spoken, with an all-around personality, a man of learning and erudition in his professional sphere, Shri Kaul was a self-made man by dint of his hard work, commitment and dedication. He will live for ever in the heart and thoughts of his relatives, friends and colleagues.

May his noble soul rest in peace.