In early sixties a young Kashmiri walks into the T.O.I. Dharmyug’s 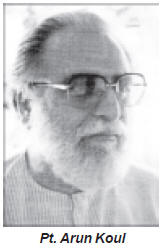 office at D. N. Road Bombay, with a Hindi poem in hand and introduces himself to the Editorial Staff as ‘Arun Pradeep Kaul’. Dr. Dharmvir Bharti is impressed with the thought - content and the metrical versification of the poem and ‘Arun Pradeep Kaul’ is instantly columnised as a young talented Hindi versifier.

In the years that followed, the morning aurora (Arun) lends its sporadic radiant emission to the little lamp (Pradeep) who later becomes a trail - blazer as Newscast, Filmmaker, T.V. Producer and Scriptwriter.

At that point of time nobody could visualize that this youngman would one day storm the citadels of filmdom, where newcomers were usually coldshouldered.

It didn’t take long time for the contemporary serious filmmakers like Mrinal Sen, Umesh Kalbag, Shankar Bhattacharya to notice the sharp acumen and the flair for writing of ‘Arun Pradeep Kaul’, who associated him as coscriptwriter in their ongoing Productions.

At that point of time, the new entrant in the world of filmdom felt that his middle name ‘Pradeep’ had lighted his path and he chose to drop it and thus the youngman landed himself on the firmament of Indian Cinema now only as ‘Arun Kaul’.

The analytic temperament and deep incisive thinking made Arun Kaul (now affectionately called Arunji) restive, as he felt, ‘heroes running around the trees chasing heroines in Hindi Films made of mockery of Indian cinematic intelligentsia, of which, he believed, there was no dearth. He, therefore, founded the ‘Film Forum’ and ‘Forum for Better New Cinema Movement’ in India.

Soon rational thinkers, upcoming writers with innovative approach and literatures joined the movement, which made run-of- the-mill cinema veterans skeptical about the activities of this new breed.

The ‘Forum for Better Cinema’ started importing awardwinning films and documentaries from Poland, Germany, Prague and exhibited these in metropolises of India. The intellectual class appreciated, now available, better cinema and the movement of Art Cinema or Parallel Cinema caught on. Arunji automatically became the focal point of this new awakening.

Naturally, the various Govt. Agencies dealing with films / cinema and other cinematic institution of the country felt honoured to have Arun Kaul on their Boards as either a Member or as an Office Bearer. Between 1962 - 1980 Arunji was simultaneously connected with 18 contemporary National or International film institutions like; he was Member of the prestigious ‘Film Censor Board’ - 3 times from 1968, Jury Member for National Awards (Documentaries and Short Films) and Jury Member for National Award Feature Films, Founder Secretary of the Society of Indian Film Director’s Association.

During this period he also represented the country as the leader of various Delegation to Karlovy Vary, Venice, Locarno, Annonay, Fukuoka and Mannhein Festivals.

He was the Consultant General on Indian Participation in Venice Festival in 1972.

When Television came to India, it opened new vistas for all the small and big cinematically connected persons. It was natural corollary that Arunji was much sought after by Doordarshan and National Film Development Corporation for production of some of their key projects, which required special and sensitive handling.

Doordarshan commissioned Arunji to co-produce ‘Turning Point’ in 1991 which ran for record number of 5 years and was dubbed and telecast in 10 regional languages.

Being a Kashmiri, Arunji was thought to be ‘right choice’ for producing weekly Magazine‘Kashmir File’ in the tumultuous militancy period in Kashmir, which dealt with rich cultural heritage of Kashmir and also subtly hinted upon the dwindling ethos of ‘Kashimiryat’. Being Kashmiri Pandit, proud of his Brahminical blood running in his veins Arunji now prefixed ‘Pandit’ epithet to his name and supporting a big vermilion Tika on his forehead, he went for location shooting of the ‘Kashmir File’ assignment, now, as ‘Pandit Arun Kaul’, much to the consternation of both his friends and foes. After 85 episodes the programme, which was even appreciated by bulk of Kashmiri Muslim for its unbiased treatment, was terminated at the interference of the power that be, because the weight of satirical pun was to much to bear for them.

Besides, ’50 Years of Indian Independence’, (4 Parts) commissioned by Doordarshan and many such other prestigious projects, the 8 documentaries produced by ‘Arunji’ on ‘Museum and Museology’ can not go without a mention here; because the subject of art in any form was close to his heart.

That his knowledge of naad (music) could rival his penchant of scriptwriting.

His chivalrous and gallant nature came to fore when he had to deal with the lives of 5 most venerated ladies in the field of art and literature, or who had done the country proud by their social service, viz. Dr. Usha Mehta, Dr. Kapila Vatsyayan, Mrs. Ela Bhatt, Mrs Gul Bardhan and Ms. Lailu Writer through the medium of documentaries under the title of ‘Nari Narayani’.

Besides, Govt. electronic media channels, Arunji produced dozens of video documentaries for other channels as well, out of which the documentary on ‘Kashmir - a Perspective’, was exhibited at the ‘Inaugural Global Meet on Kashmir’ at London and Geneva, which changed globally the perception on Kashmir imbroglio.

A voracious reader, one would find Arunji immersed in books, when not engaged in filmmaking. This childhood habit to devour the literary classics, helped him to understand the undercurrents, deep nuance, tone and feeling of the story content.

Knowing this trait of Arunji, when Gulzar Sahab thought of making a serial on Ghalib, he could think of none else other than Arunji to script it. Having seen the irrepressible writer in Arunji, which, to an extent, Gulzar Sahab felt proximate to his own self; he invited him to co-script his three films Ijazat, Lekin and Zevar, which were critically appreciated by the film world.

Or when Door Darshan thought of making 17 - episode serial on Premchand’s ‘Karmbhoomi’ the Kendra was sure that ‘Karmbhoomi’ could be dealt with excellence by Arun Kaul, who himself as a ‘Karmyogi’ - a firm believer in ‘Work is worship’.

Man who was never interested in the material gains, Arunji was principled, courteous, humble and embodiment of gentleness.

But one thing which, perhaps, was a barrier in his material prosperity was, what one may call, his being ‘supercilious’. Of course, not amounting to arrogance.

At best, it could be termed as his non-compromising attitude.

While doing serial ‘Nupur’ of Hema Malini, Arunji’s younger brother, needed his physical attendance at Hyderabad for some eye treatment, which would mean being away for couple of months. Arunji apprised Hemaji about his domestic compulsion.

Hemaji, in a casual manner, said ‘Arunji write the seven remaining episodes in a day or so then attend to your brother’.

The non compromising Arunji said ‘Hemaji, I am no electric gadget that you put in socket and script would be printed out. I write with my soul, sorry I quit’.

The Noopur had to end suddenly with 13 episode.

Looking back at his illustrious career of 40 years in the film world, it is beyond comprehension that one could have scripted and produced nearly 50 documentaries many of which earned him National and International Awards; produced three path - breaking movies, (Ek Adhuri Kahani directed by Mrinal Sen), Bhuvan Shome (Directed by Mrinal Sen) and Andhi Gali directed by Buddadeb Das Gupta; co-scripted ‘Dharma Keshtra’, with Umesh Kalbag, which won him ‘Best Original Script Award’ of NFDC; ‘Diksha’ a Hindi film based on Kannada Short Story by Dr. U. R. Annanta Murty; Mirgya - Hindi film with Mrinal Sen; Ashwamedhar Ghorawith Shankar Bhattacharya, Sampark; Kal Chankra; Khazanna - 6 part serial by Yash Chopra - one would say GENIUS INDEED! Diksha (initiation) produced as well as directed by Pandit Arun Kaul was adjudged as the ‘Best Hindi Film’ and won Rajjat (Silver) Medal in the National category in 1991. It was selected by the Directorate of ‘Film Festival’s National Jury’ for inclusion in the ‘Panaroma of Indian Cinema, Bangalore’ in 1992. It also won ‘Film Fare Critics Award’ as the ‘Best Directed Film’ and in the same year it also got ‘Yugshree Award’ as the ‘Best Directed Film’ for Television.

Arunji’s pursuit to gather knowledge on all the forms of art led him to interact with that time famous ‘Little Ballet Group’ an IPTA Branch, which used to hold world wide shows of Indian Classical dances; where he met a coy, dove-eyed and cute performing artist - Sharmishta in 1963, who ultimately became his life-partner.

Sharmishta bore him two sons - Vilash & Indraneel, who are also connected with films and are doing quite well in their respective fields. Though Arunji was a doting husband and an affectionate father, yet the family had a grudge - ‘that he was wedded to the films rather than to his family’.

“Arun Pradeep Kaul” descended upon this earth from the celestial milkyway as a beacon on 12th August, 1933 and left for his heavenly abode as ‘Pandit Arun Kaul’ on 21st July 2007 after enlightening the film world with a brilliance of a Genius (though unsung). When the history of Indian Cinema would be written some day Pandit Arun Kaul’s name would be recorded as the harbinger and a pioneer of healthy and serious cinema in India.

*The writer is based in Mumbai.