I had the good fortune of getting to know Shri Bansi Lai Khar at Jammu over a decade back . Our relationship flowered into a close friendship within a couple of years. How sad it is that only after a short illness his health deteriorated so fast that he gave up his mortal coil within a few weeks and he is now no longer amidst us in his human form ! The news of his sad and untimely demise came as a rude shock to his numerous friends and admirers from all walks of life in Jammu and Kashmir. 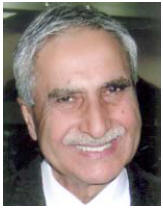 Precisely speaking, Bansi Lai Ji and 1 remained closely associated with each other as active members of the Upanishad Vatika, which is housed in a room of the residential building owned by the Sadhus (KP family at Patoli, Janipur). It was founded by the saint-scholar Shri Jankinath Koul Kamal’, who left for his heavenly abode in the year 1997. Later on, with the passage of time, theVatika grew into a vibrant spiritual centre, though very modest in terms of\’physical accommodation and also short of any trappings. The members get together, as devotees, every week in the evening on Tuesdays, offer congressional prayers and also participate in religious discourses on some select spiritual texts. It is with a sense of nostalgia and deep gratitude that I recall the valuable contribution of some members to the growth of the spiritual centre in question over a period of time. They unfortunately passed away in quick succession one after the other: Sarvashri Kashinath Toshkhani, M.L.Qasba, C.L Durrani. Prem Nath Raina, Dina Nath Yach (well known Sanskrit scholar and researcher) and Anupam ji learned son of his illustrious father, Late .Jankinath Koul ‘Kamal’.

Then, followed the recent exit of the great personality we affectionately called Khar Sahib, the “”Bansi Lai” I addressed a poem to in English. He rendered his valuable services to the Vatika through his lectures on the Gitafor a couple of years followed by his textual analysis of the slokas of theSunderlahri. He will be painfully remembered when we meet next at theVatika after a long break!

Bansi Lai Ji’s signal contribution, through his continuous services rendered all the years to the Pushpati Mandir. upper Laxmi Nagar, deserve special mention. Persuaded by him last year, I chose to become a life-member of the General Body of the Mandir. During the past one year or so. 1 occasionally joined the Puja at this Mandir. 1 am, however, not knowledgeable enough to write in detail about Bansi Lai Ji’s great contribution to this spiritual centre. All that I know is that he was anchor man of the religious body here; he never missed his morning and evening prayers at the Pushpati Mandir. He was in fact the prime mover of all the religious activity that has been going on here.

What I consider as Bansi Lai Ji’s crowning achievement is the hard labour he put in during the last two years in enriching the contents of the English section of the Khashir Bhavani Times- Journal, published by the K..P Sabha. He gave it fine touches and contributed not only valuable editorial pieces but other write-ups too that won him the reader’s applause. He had a flair for writing and was very knowledgeable about the topics he chose to write on. He had all the makings of an accomplished writer and has left behind a large number of published essays that can be complied into a posthumous volume.

Above all, I have known Bansi Lai Ji very intimately as one advanced in the spiritual path. Well read in the scriptures, he was at the same time a Karmayogi of high order, also a Bhakta who attached due importance to religious rituals. A few months back he called on me when I was absorbed in singing Bhajans to the accompaniment of my harmonium. I had a glimpse of his spiritual stature in a momentary ‘vision’. He will continue to live in my thoughts. He will indeed be remembered by his friends, admirers and dear ones as an out standing person, a great soul.

I was, like any other person, shocked over the passing away of Sh. B.L Khar. I had the good fortune of knowing him from close quarters and was immensely impressed by his sterling qualities of head and heart. He endeared himself to all who came into contact with him by his sweet disposition, candour, gentleness and above all his modesty about his achievements in various walks of life. He was a versatile and accomplished writer in his own right and had a good grounding in indology. He was deeply religious and possessed an in-depth knowledge of our scriptures. Sh Khar was verily a sparkling jewel in the crown of his community.

He took great pains in serving people in general and the members of his community in particular in the capacity of a dedicated and committed social activist. Humility, which accompanied his entering and result-oriented efforts, set him apart from most of the people around him.

Sh. B.L Khar has served as a typical example of the philosophical concept of ‘life in death* insofar as he, in his life time, placed himself at the service of people selflessly and with dedication and has thereby made himself immortal. He will live in the memory of people for his noble thoughts and commendable deeds.

May his soul rest in eternal peace!