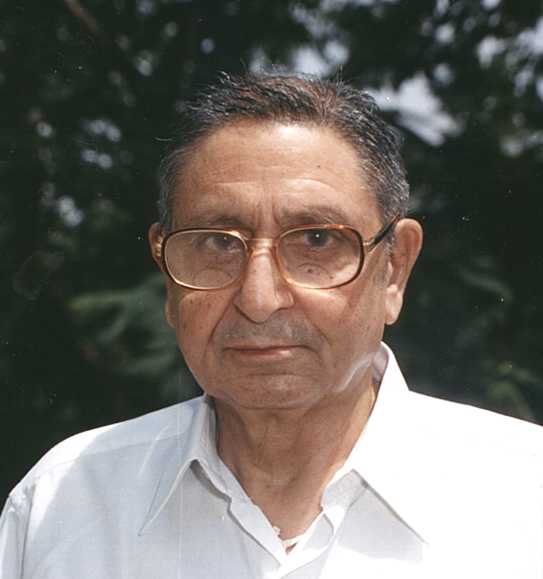 Karan Nagar, Srinagar, Kashmir, left for heavenly abode in September 2006. Shri Kachroo was a person with vast experience who had mastered the art of teaching. On one hand he was an expert in teaching ofEnglish language and on the other hand he was excellent in teaching of Mathematics and Science. He was among the pioneers of school B'casts programmes from Radio Kashmir in the Valley. A J&K State awardee for best teacher he had carved out a special niche for himself in the educational field of the Valley.

I knew him as a teacher, as a colleague and as a principal. In all the three capacities he had his own specific characteristics. He was an excellent teacher, an amiable colleague and a strict administrator.

When I joined the school as a student in Class-VII, he used to teach the 9th and 10th classes. He was known for his methodic and innovative teaching in Science and English language especially.

When I reached 10th Class, he was assigned the teaching of English to our class, besides he was our form teacher. As a class teacher he believed in involving students in various activities. We were given specific responsibilities in order to develop our specific capacities. Today, when I look on those days I am convinced that Shri Kachroo tried to develop in us critical attitude, scientific temper and a sense of responsibility.

While teaching English language he would use structural approach to bring home to us certain grammatical structures and forms. During those days translation method was in use and structural approach had not developed much. However due to his personal reasons he had to proceed on long leave and was away from the Valley. This put an end to our interaction with him as a student and the teacher. But during that short period I could realize that he believed "in drawing out what is already in a student". His method of teachingwas scientific, innovative and that he followed the maxim" from known to unknown".

I joined the school again in 1962 as a teacher. This time Sh Kachroo was my senior colleague. He at once took me into his arms and assured me of his guidance and cooperation. This provided me with an opportunity to work with him closely. I found that has academic activities were focused on promoting and introducing innovations. He believed in proper planning and always advised me to make proper plans before going to teach in the classes. He believed in free and frank interaction with the students. Although he bore a stern face yet he was friendly to them.

In 1969 he was promoted to the post of headmaster. This was the beginning of modernization for the School. English medium sections were added. KG classes were started. The academic atmosphere of the school was given a new and fresh direction.

In 1972 he became principal on the retirement of Sh DN Raina, the then Principal. Under the agile leadership of Sh JN Kachroo, the school started a number of projects in order to improve the academic environment of the school. An institutional plan was framed which defined in concrete terms the goals that the school had to achieve in the coming decade.

Sh Kachroo had a vision and as the leader he tried to fulfil that vision. In this he was able to carry the staff with him. He got full support from the members of the staff in implementing all the new and innovative measures.

From 1982 to 1986 the school passed through a difficult and trying period. The school building was gutted in a devastating fire in October 1982. Thereafter started a period of tough struggle against odds. His able handling of the situation and negotiations with various agencies enabled the management to acquire the building and consequent reconstruction. The school got a new lease of life.

"It gives the members of the managing committee of National School, Srinagar, immense pleasure to place on its record the appreciation for the dedicated, commendable and meritorious services rendered to the school by Sh JN Kachroo throughout his devoted and dedicated service of 40 years. His contribution to the school especially during the trying period from October 1982 deserves a special mention. His guidance and leadership as Principal of the school gave the institution a place of pride in the educational map of the state".

Sh Kachroo was associated with a number of educational activities of the Valley. He was a resource person in teaching of English and participated in a number of workshops conducted by the Extension Services Department of College of Education, Srinagar.

He was an excellent broadcaster and was associated with school B'cast programmes of Radio Kashmir. He was secretary, Kashmir Aided Educational Association for a number of years.

He was a scholarly person who believed that to be successful in life one has to be a human being. He had a keen sense of observation and analysis. He always advised us to do things creatively and differently in order to achieve excellence.

May God grant peace to his departed soul!