Moti Lal Saqi is no more

Community loses a veteran warrior on the cultural front 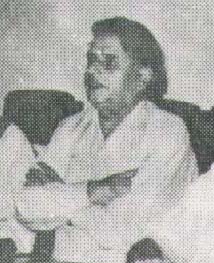 hours of May 21, 1999 in New Delhi after a massive heart attack. Earlier in March he had undergone surgery for a heart ailment at Jammu, and was now recuperating at his eldest son, Vijay Saqi's residence at Sarojini Nagar. The tragic news of his death was received with great shock by his numerous friends and admirers in Delhi who rushed to bid him a tearful farewell. With his demise the Kashmiri Pandit community has lost yet another warrior who was in the vanguard of the struggle to save and sustain its culture in exile.

Born in 1936 at Bijbehara, Kashmir, Moti Lal Saqi enriched Kashmiri language and literature in several ways, and emerged as a major poet and critic in the language while still in his youth. From the lyrical romanticism of 'Modury Khwab' (Sweet Dreams), his first collection of poems, to the spiritual restlessness and an inward quest for higher values based on faith reflected in'Mansar', for which he won the Sahitya Academi award, and 'Mrigvan', Saqi underwent a significant change in his sensibility as a poet and established an idiom distinctly his own. The traumatic experience of uprootment from his native soil in 1990 found a poignant expression in many of his poems, his long poem 'Marsi' (Elergy) being a most disturbing document of the tragedy of the Pandits' displacement. His latest collection 'Niry Nagma' (Songs of the Green Meadows) shows his intense nostalgia for Kashmir and points to the torture of having to live in a forced exile away from the Valley's myriad charms and attractions.

Saqi's contribution as a literary critic is equally impressive, his work on Sheikh Nur-ud-Din, popularly known as Nund Rishi, and the Sufi poets like Samad Mir is regarded as monumental. As a folk-lorist, Saqi compiled five volumes of Kashmiri folk-songs with a valuable introduction and annotation. His numerous articles on Kashmiri literature, art and culture were published in several prestigious magazines and journals of the country.

Moti Lal Saqi was a lexicographer as well, having worked as an editor of the Kashmiri-Kashmiri and Urdu-Kashmiri dictionaries brought out by the J&K Cultural Academy under the Chief Editorship of Prof. S. K. Toshkhani. He also edited the three volumes of Kashmiri Encyclopedia published by the Academy, showing his great acumen as a researcher.

His latest book 'Aagar Neb' reflects his deep research and study regarding various aspects of Kashmiri culture. Surprisingly enough, Saqi was awarded Padmashri for his services to Urdu literature.

Moti Lal Saqi was alo associated with the activities of the N. S. Kashmir Research Institute and had agreed to work for the compilation of the encyclopaedia of Kashmiri culture which the Institute is going to bring out. We at NSKRI deeply mourn his loss which we feel is immeasurably great for a community that values learning and literature above everything else.

A tribute to Saqi

A simple villager, who never shed off his pastoral homeliness, humility and open-heartedness, who never allowed even a grain of false ego enter his head, inspite of recognition, both at state and national levels, and who always lived the lily of an honest and eager learner till his last breath. That was Saqi - ever lively, ever communicative, ever cheerful.

When I think of Saqi the words of the great French philosopher Voltaire, come to my mind. He had said, "not to be occupied, and not to exist, amount to the same thing".

Saqi kept himself perennially occupied with finer pursuits in life. Put your finger anywhere on the literary and cultural canvas of Kashmir, and you will find Saqi's name there, as a contributor, a researcher, an elucidator, a commentator or a scholar. All that kept him occupied were his creative endeavours and his pen seemed to reach everywhere. In these days of pin-pointed specialization, one hardly finds any equal to this man of multifarious brilliance.

When the physical and physiological makeup of his person, especially his heart? prevented him from keeping himself actively occupied, as he had done all his life? Saqi ceased to exist. He died.

Like all displaced Kashmiris, Saqi's soul had been deeply lacerated when circumstances drove him out of Kashmir, the land of his ancestors. Everyone loves his land of birth, but Saqi had done so, sometimes with the passion of a lover, sometimes with the care of a doting mother, and sometimes with the dedication of an ardent admirer. His only possession, only asset and only wealth, was his pen, which he used all his life in praise of Kashmir.

Some years back I once told him that since our displacement, he had gone a little slow with his pen. He responded with a deep sigh and recited a coupled of Nadim:

Then, after a pause, he added, with yearning in his eyes, "because our pagah' (tomorrow) will be in Kashmir". He did not live to see the 'pagah' of his dreams. Many of us won't, either.