In mid-eighties, when young Sushil Aima, a 12th class student, 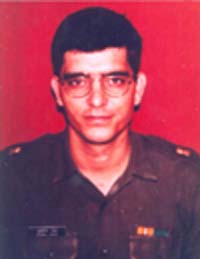 soughtadmission to the National DefenceAcademy, he did not inform his parents or any other member of the family. He feared that with the exclusive artistic background of the Aima family, nobody would approve of it. But after he was selected in 1985, Sushil reluctantly went to his father and gave him the news, fearing that the answer would be a firm ‘No’. But that did not happen. His father, Makhanlal Aima, an insurance officer, did not get angry, but he did appear visibly surprised.

‘Papa’, Sushil told him, “joining the army has been my dream and today my dream has come true. I assure you I will not disappoint you. I will make a good soldier”.

Major Sushil came from a gifted family of Srinagar. His uncle, late Mohanlal Aima, was among the moving spirits of the post-1947 revival of Kashmiri music. He lifted the Kashmiri “chhakri” from its plebeian moorings and gave it popularity and respectability among the high-born Kashmiris. Through the medium of newly established radio station in Srinagar, he was instrumental in bringing out the “sufiana” music from the “diwankhanas” of the elite and taking it to the homes of common people.

Omkar Aima, another uncle of Sushil, was a stage personality before he moved on to Bombay films, starting with the lead role in first-ever Kashmiri feature film, ‘Mainzraat’.

Satish Kaul, a cousin of Sushil, carved a place for himself, both in Hindi and Punjabi films. Another cousin, Alok Aima, has made a name in Hindi and English theatre in Dubai.

Sushil was commissioned in the army in 1988, as the years rolled by, he grew into a fine soldier, and, when the moment of ultimate challenge came, he touched the pinnacle of valour, which any soldier anywhere in the world would be proud of. In his brief career he earned the praise of his superiors for his bravery, initiative and leadership qualities, especially, during his stint in Doda district in Jammu and Kashmir, one of the worst militancy-affected areas.

In 1997, Sushil was given the rank of a Major. In 1999, when he was 32, with a promising future ahead of him, he was martyred in Poonch sector of Jammu and Kashmir, defending his motherland. He fought valiantly till his last breath against the Pakistani intruders, and joined the select ranks of the martyrs of the great Indian army. In his death, in the prime of his youth, Major Aima covered himself with glory, and brought honour to his family, his people and his country. For a country, no glory can be greater and nobler than that brought by its soldier sons who lay down their lives while defending the honour of their motherland. Sushil Aima immortalised himself as one such soldier son of India.

The first day of August ’99 was hot and humid. Makhanlal Aima and his family were home at Palam Vihar (Haryana), trying to ward off the oppression of the sultry weather. But they were also eagerly awaiting the arrival of Sushil, who was to join the family to celebrate his fifth wedding anniversary, the next day, August 2.

But Major Sushil did not arrive. He never did. Instead came a stupefying shock, a message from the army, that he was no more. He had been killed in an encounter with Pakistan-backed mercenary terrorists in Poonch, where he was posted, on the eve of his wedding anniversary.

Late at night, when Major Sushil was resting after having made preparations for his departure for Delhi next morning, news was brought to him that a large group of foreign mercenaries had assembled on a nearby hill. It was learnt that the group had plans to attack a village in the vicinity, largely inhabited by members of one particular community.

A hurried conference was held. It was decided to go into action, surround the terrorists, and then launch a full-blooded attack, to be led by Maj Sushil. The young officer and his jawans soon made contact with the enemy and a fierce encounter followed. It lasted for seven hours, and ended up with a hand-to-hand fight, with heavy losses among the intruders. Two terrorists fell to the bullets of Major Shushil, but in the later stage of the encounter, he was fatally wounded when a bullet hit him in his left temple. Holding the revolver in his left hand, he also shot dead the third terrorist who had fired the fatal shot at him. Then he provided cover to a colleague, who had been grievously injured in a grenade blast, and helped him crawl to safety. It was then that Major Sushil’s end came.

When the body of the deceased hero was brought to his home at Palam Vihar, hundreds of people had gathered there to be with the bereaved family in its hour of grief. They stood there, men and women, in silent sorrow. Not many had seen or known the young army officer, but here was India, paying its homage, to a martyred son of India.

Makhanlal Aima, holding in his arms his nine-month old grandson, Sidharth, was a picture of restraint and dignity. His friends, crowded round him with words of sympathy and consolation. In a choked voice he told them, “it is an irreparable loss to all of us, and a perpetual agony for the two small kids and their young mother. But I also think of scores of other parents and relatives, who, like us, have been receiving the dead bodies of their soldier sons from the battlefront. I don’t consider it as mere death. It is martyrdom. A moment of pride and honour for all of us.”

Later when Major Sushil’s body was taken for its last rites, Palam Vihar was transofmred into a sea of people. Thousands of them lined the road, among them school children too, whose schools had been closed for the day. Businessmen closed their establishments and shops to join the funeral procession. From ministers of Haryana, led by Revenue Minister, Kailash Sharma, to the local sarpanch, Ranjit Singh, there was hardly a civil or army dignitary, who was not there to bid farewell to Major Sushil Aima. His officers and colleagues in the army were there in full strength.

It was a spontaneous gush of sorrow. It overwhelmed the Aima family. Omkar Aima could contain himself no more. With tears trickling down his cheeks he thought of the dark days, a decade ago, when the eruption of terrorism in Kashmir, had driven out the entire Pandit community from the Valley. At that time no fleeing Pandit knew where he would find safe refuge. Everyone of them wondered whether he would be owned anywhere and whether he would belong anywhere.

Walking alongside the cortege of his nephew, Omkar felt Major Aima was the son of India and the exiled Pandit community belonged to the whole of India, and every nook and corner of the country was its home.

Held by his grandfather in his arms, little Sidharth was made to light the pyre of his father, who had been described as the “bravest of brave” by a senior officer of his, Maj Gen A Mukherji. Who knows what dreams Major Aima had dreamed for his little son and four-year daughter, Ridhi. But one can be sure that he died with the confidence that a grateful nation, he left behind, would give them a happy childhood and a secure future.

A few days later a special function was held at Rohtak where Haryana Chief Minister, OP Chautala, handed over a cheque of Rs 10 lakhs to Archana Aima, widow of Maj Sushil. The hearts of Omkar and Makhanlal Aima, who were present, brimmed with gratitude for the people of Haryana, Maj Sushil’s adopted state. But a gnawing feeling rankled deep down in their hearts. Sushil was born and brought up in Kashmir, and he was martyred on the soil of Kashmir. And yet, the chief minister of Jammu and Kashmir, Farooq Abdullah, did not have a word of sympathy or condolence to convey to the bereaved Aima family.

Sushil has gone to eternal sleep, as did many brave soldier sons of this country during the summer of 1999, after shedding the last drop of their blood for the honour and integrity of their motherland.

On Fame’s eternal camping ground
Their silent tents are spread,
And Glory guards, with solemn ground,
The bivouac of the dead