Shankaracharya Temple: The antiquity of Shankaracharya temple is akin to that of Vaishno Devi in Jammu. The temple, dedicated to Lord Shiva, has legends dating back to 200 BC. Built to overlook the valley, situated atop the Hill it has the devout climb the hill with offerings in their hands, a motorable road has been built leading to the TV Tower on the hill. 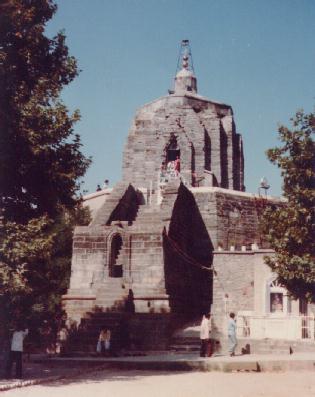 The sacred temple is situated to the south east of Srinagar. However, neither the hill nor the temple retain their pre-historic names, Gopadari and Jyeshtheswara respectively. The temple is built on a high octagonal plinth approached by a flight of steps.

Hari Parbat Fort: To the west of the Dal lies the Hari Parbat Hill, sacred to the Goddess Sharika in whose honour a temple has been consecrated on the western slopes of the hill. Further up, on the crest of the hill is Hari ParhatFort which dates to the 18th century. 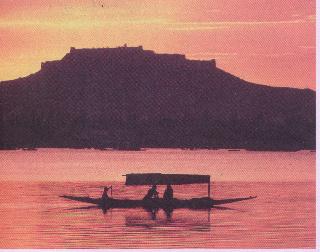 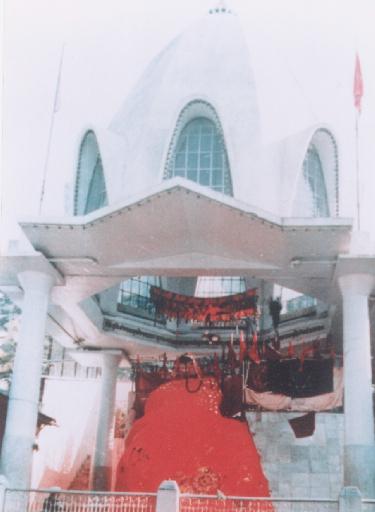 Amarnath: History records that the first pilglimage to Amarnath was undertaken in 1000 BC, though little else is known of the antiquity of Amarnath. Located 141 km from Srinagar, of which 45 km from Pahalgam has to be trekked, Amarnath is believed to be the holiest of Hindu shrines.

The Amarnath yatra is undertaken in July-August (Shravan) and thousdads of devotees walk, some on ponyback, to pay obeisance at the cave where an ice-lingam, that of Shiva, waxes and wanes with the moon. By its side are two other ice lingams, those of Parvati, and their son, Ganesha.

Khir Bhawani: Goddess Ragnya Devi is worshipped here, symbolised by a sacred spring at Tula Mula village, 27 km from Srinagar. In the centre of the spring is a small marble temple and the Hindu inhabitants of Srinagar fast and converge at the spot on the eighth day of the full moon in the month of May when legend has it, the goddess changes the color of the waters. 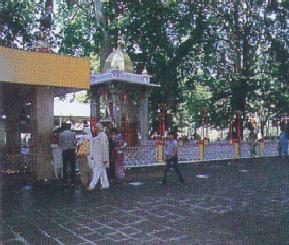 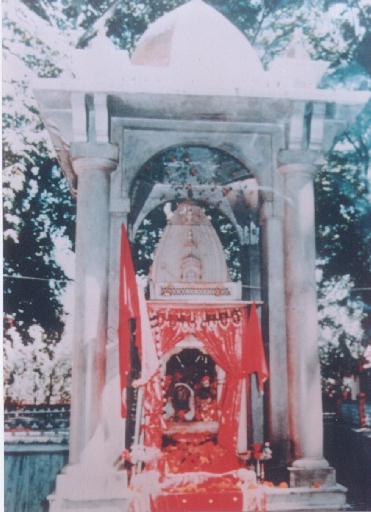 Mamal: Opposite the Rest House at Pahalgam, on the right bank of river Lidder is a small temple, now in ruins, dedicated to Lord Shiva. The temple had an eight square feet interior with a porch supported by two fluted columns, one of which has now weathered away. In fact, the suprastructure is no longer there and even the ceiling no longer exists. Inside the sanctum is a Shiva lingam.

Pandrethan: A village by this name is a bare three miles above Srinagar. It has a well-preserved temple behind the willow grove on the left hand side of the cart road. The ceiling of the shrine is rated as the best example of carving on stone in the entire valley. Though ascribed to Vishnu or Shiva, the seven square feet 'depression' in the centre carries no deity, only carved 'yakshas'. 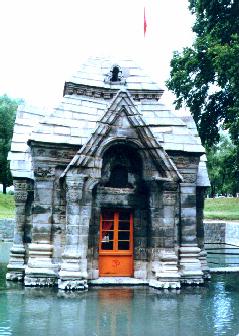 Pandrethan is one of the few temples in Kashmir with roof intact.
Although miniature in size, it is ornate with structural symmetry (10th century).

Martand: It is located on the top of a plateau, a bare five miles from the town of Anantnag. The temple is dedicated to Surya, the Hindu Sun God. It is a medieval temple with a courtyard, colonnaded and with the shrine in the centre. It has 84 - a sacred Hindu digit - columns and affords a commanding view of the valley. 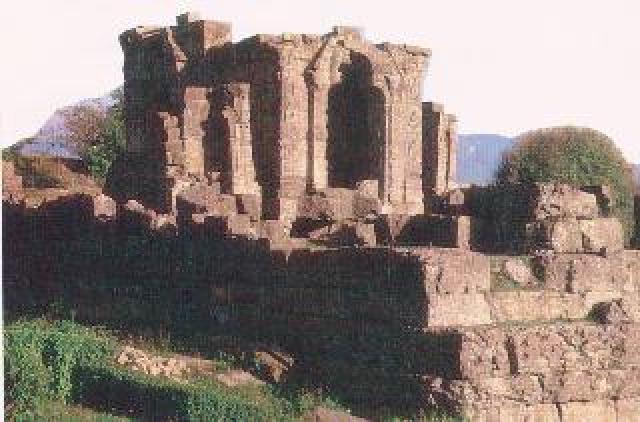 Only 64 km from Srinagar is Achhabal, the abode of peace, a powerful stream embellished, in the 17th century, by Shah Jehan with gardens and baths. The spring waters run into three channels over terraces where chinar trees stand vigil. Short of Acchabal is Anantnag, 54 km, the infinite spring surrounded by a flower garden, linked with Hindu mythological god Indra. At Mattan, 61.5 km from Srinagar, are famous temples where sacred ceremonies are held to propitiate the dead.

At the temple of Mattan

Chatti Padshahi, one of the most important Sikh gurudwaras in Kashmir is situated just outside the southern gate of the fort.

Makhdoom Sahib: It a shrine on the southern side of the Hari Parbhat hill, is visited not only by Muslims but by people of all faiths.

Hazratbal Mosque: It is located in a village of the same name on the banks of the Dal, its pristine white marble elegance is reflected in the waters of the lake. Hazratbal's special significance is derived from the fact that it contains a hair of the Prophet Muhammad. This is displayed to the public on religious occasions, usually accompanied by fairs with streetside stalls. 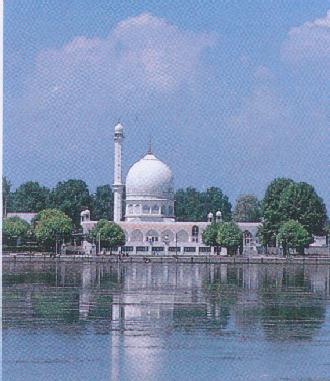 Khanoah of Shah Hamadan: The Khanoah stands between the third and fourth bridges on river Jhelum which flows through the city of Srinagar. To the north west corner of the complex is the tomb of Shah Hamadan.

The mosque of Shah Hamadan is a pagoda-like structure built entirely of wood. Only the faithful may enter its precincts, others having to satisfy themselves With a look through the door. The interiors are intricately carved and flamboyantly painted and decorated with large chandeliers.

Jama Masjid: It is said that Sikandar But-Shikon laid the foundation of the Jama Masjid in 1398 AD and completed it in 1402. He ruled from 1390-91 to 1414 AD while his son, Zain-ul-Abidin, improved it aesthetically. It was re-built after a fire ravaged it in 1479 AD. In 1620, during Emperor Jehangir's reign, yet another fire destroyed it. In 1674, a third conflagration razed it down and it was left to Emperor Aurangzeb to rebuild it. Its principal features are the four minars and eight wooden columns as supports. 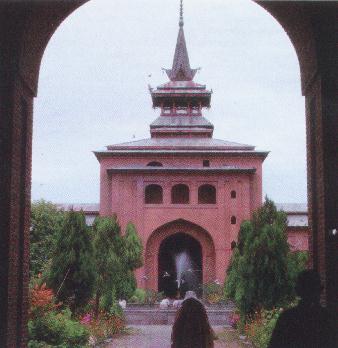 The simple beauty of Jama Masjid.

Chrar-e-Sharief was a Shrine holy to both Muslims and Hindus. It was burnt down by the Islamic militants in 1995 at the behest of Pakistan. Sheikh Nooruddin, after all, was arguably the greatest mystic-saint of Kashmir.

Nothing could better exemplify the composite culture of Kashmir than the life of Sheikh Naruddin himself. The Sheikh was born as Nund Reshi or Sahazanand in 1377 AD. His ancestors came from Kishtwar and had migrated to the Valley. His father, Salar Sanz, a pious man, came under the spiritual influence of Sufi Saint. Yasman Reshi who arranged his marriage to Sadra Maji. For three days, the infant Nund is said to have refused to be breast-fed. The third day, the Yogini, Lal Ded (a very well known saint) entered the house and put the child's mouth to her own breast.While leaving, she is said to have called the infant her spiritual heir.

While personifying the Hindu-Muslim culture of the Valley, Nund, later named Naruddin, 'the light of faith', fully believed in the immanence and transcendence of God, hoped for a society based on moral values and preached against indulgence. All his life he wore a coarse pheran. Within two days of his death in 1438 at Charar, nine lakh people are said to have gathered at the Shrine, including the King, Sultan Zainul Abdin.

He preached against communal hatred and wrote: "We belong to the same parents. Then why this difference? Let Hindus and Muslims together worship God alone. We came to this world like partners. We should have shared our joys and sorrows together." 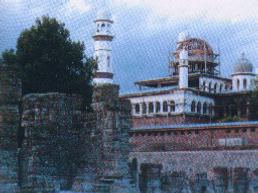 The gateway to the Vishnu temple at Avantipur, with a more recent mosque behind it. 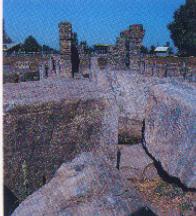