Ladakh: The Land of Rock

The Land of Rock

Ladakh - the land of many passes

The Srinagar-Leh road, skirting the banks of the Drass river reveals a canvas full of colours, painting a soulful harmony. It composes a moment when Nature is in creation.

Once past the Zoji-La (pass), the change is dramatic and stark. The green valley suddenly becomes barren and awesome. The air gets brisker, the sun warmer. And before you is a gigantic sculpture in desolate rock, silencing the mind and compelling the imagination to stand back and gaze in awe at this vast expanse of solitude.

Now you are a little closer to the skies. The once forbidden land of Ladakh unfolds itself. An amazing land, top of the world.

The small villages, with towering edifices of granite and gravel mountains encompassing them, look frail and inconsequential. This is Ladakh - the land of rock.

Ladakh - the land of many passes, of freezing high barren landscapes lying across the lofty Asian tableland - is among the highest of the world's inhabited plateaus. Remote yet never isolated, this trans Himalayan land is a repository of a myriad cultural and religious influences from mainland India, Tibet and Central Asia.

Situated on the western end of the Himalayas, Ladakh has four major mountain ranges - the Great Himalayan, Zanskar, Ladakh and the Karakoram - passing through it. A maze of enormously high snow capped peaks and the largest glaciers outside the polar region, dominate the terrain where valley heights range from a mere 8,000 feet to 15,000 feet while passes of up to 20,000 feet and peaks reaching above 25,000 feet can be seen all around. The world's largest glacier outside the polar region, Siachen is here. Such daunting heights no wonder determine the land's temperature where Leh and Kargil experience temperatures as low as - 30° C and Dras -50°C. Three months of sub zero temperatures (Dec-Feb) and the, rest of the months facing zero degree temperatures, it is a long and hard winter here. Waterways, waterfalls and lakes freeze, and the water vapour freezes to break into the most intricate and attractive crystal patterns. But on clear sunny days, when the average temperature goes over 20° C, the sun can be scorching hot in its intensity and its ultra violet rays cause deep sun burn. Rainfall is a mere 2 inches and it is the melting snow in summer which sustains life in this arctic zone. High aridity and low temperatures lead to sparse vegetation as a result of which the landscape is desert-like with sand dunes and even occasional sand storms occur.

The major waterway of Ladakh is the Indus which enters India from Tibet at Demchok. Starting near Mt. Kailash, the Indus, according to mythology, sprouts from the mouth of a lion, and is therefore known as Sengge Chhu. Sengge (Sinh in Sanskrit) means lion and Chhu is Tibetan for a flowing water body.As it flows down, Sengge Chhu is joined by its other tributaries, the Zanskar, the Shingo and the Shyok, and these river valleys form the main area of human habitation.

Ladakh also has one of the largest and most beautiful natural lakes in the country. Pangong Tso, 150 km long and 4 km wide, is nearly an inland sea at a height of 14,000 feet, with intensely clear water of an incredible range of hues of blue. Having no outlet the water in the lake is highly brackish and the lake's basin houses a large wealth of minerals deposited by the melting snows every year. Tso Moriri, a pearl shaped lake, and Tso Kar, both contain large mineral deposits. Among the fresh water lakes Yaye Tso, Kiun Tso and Amtitla offer great scenic attraction.

Ladakh, though a remote border land with virtually no surface communication for more than six months a year, has surprisingly never been isolated. Continuous cultural and commercial contact existed with the surrounding regions of Tibet, Himachal, Kashmir, Central Asia and Sinkiang. This interaction helped maintain trade ties between the places. Pashm, salt, borax, sulphur, spices, brocade, pearls, metals, carpets, tea and apricots were the merchandise exchanged in their marts. 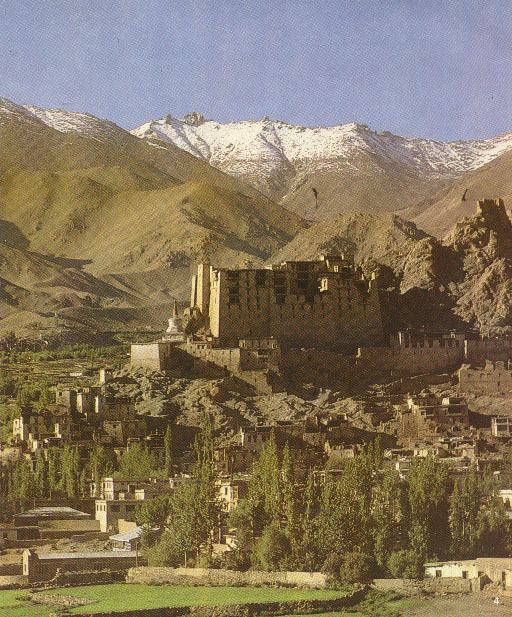 The Leh Palace, standing like a sentinel, overlooks the town

Covering an area of approximately 98,000 sq km, Ladakh has a sparse population of about 1,35,000. All habitations are situated along water courses, where long distances are traversed by using animal transportation of mainly the yak and the pony, the broad backed hunia sheep and the Bactrian two-humped camel. Ethnically, the Ladakhis comprise an amalgam of four prominent strains, namely the Mons, Dards, Tibetans and Baltis. Mons belong to the Aryan race. They might be called professional entertainers, as they move from place to place playing their musical instruments and for the most part are denied the privilege of inter-marriage with the other groups. Dards are confined mainly to Dras and the Indus Valley. At Dras, they are Muslims and retain very little of their past. But those in the Indus valley below Khalsi display a distinctive identity, preserving their original Buddhist religion as well as their cultural entity.

The Tibetans are the dominant racial strain in eastern and central Ladakh, but over the years have merged with other groups to form a homogeneous Ladakhi entity. Two ethnically and culturally distinctive groups are the Tibetans proper living at Choglamsar and the nomadic Changpas with their herds of pashm bearing goats in the eastern plains.

Baltis are mainly found in western Ladakh in the Kargil region, but isolated pockets exist in the Nubra valley and near Leh. They are believed to be descendants of the Sakas, a Central Asian race.

All groups have together contributed their own perceptible share in the distinctive physiognomy, language and homogenised culture of Ladakh. The Ladakhis are a simple and hardy people with an immense capacity for work and the fortitude to not merely survive but remain cheerful under the most adverse physical conditions. Living as close to nature as they do, they have maintained a harmonious balance with their surroundings. 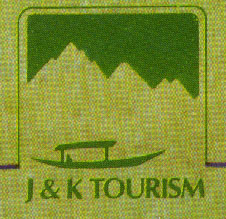