Srinagar is at once a collection of images: a son et lumiere that tells the story of the love of the Mughal emperors for this paradise vale; deep green rice fields and river bridges, of gardens in bloom and lakes rimmed by houseboats; at once summer capital of the state, business centre and holiday resort. It lies 900 kms north of Delhi. 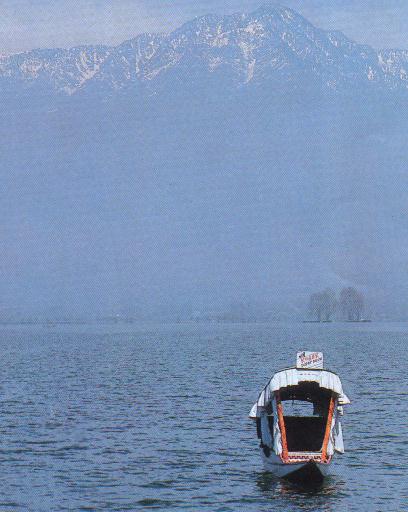 A Shikara in the Dal lake, Srinagar.

Circular residential pits around Srinagar date the settlement back to 4,000 years. Recorded history suggests the origin of Srinagar in the 3rd century B.C. under the domain of Emperor Ashok.

History has shaped the development of Srinagar, but it was the lakes and the river that have always remained at the center of all activity. Initially laid out to the north-eastern bank of the river Jhelum, Srinagar soon spread across to the opposite bank, the two sides linked by cantilevered bridges. Some of these bridges still retain their builders' names, as Zaina Kadal, named after an enlightened benevolent Afghan monarch. 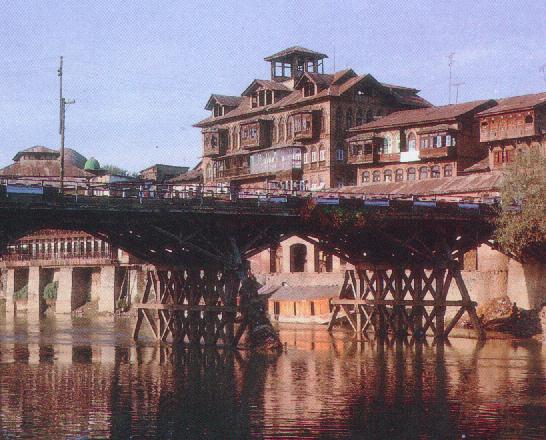 One of the bridges that span the Jhelum in the old city.

The river Jhelum and the Dal and Nagin lakes dominate Srinagar and its life and activities. Here, lush wild gardens of lotus and waterlily flower amidst bustling lanes. By the lakeside spread the gardens of the Mughals in patterned beauty. And the people move with a tranquillity borne of a history laden pulse of activity. lf legends are to be believed, the Kashmir valley was once a lake as large as a sea, and here lived an abominable demon who was killed, after most of the lake had been drained, with the collective help of Brahma's grandson, Kashyap, and the goddess Parvati. She it was who finally stilled the demon by dropping upon him a mountain, and thereby crushing him to death.

On the western shore of the Dal, opposite Nishat Bagh, stands Hazratbal, a monument which houses a holy relic of the Prophet. A great festival is held here annually. The oldest and largest of mosques of Kashmir are also in Srinagar. Shah Hamdan Masjid, a wooden structure with fine papier mache workmanship on its walls and ceilings, is the oldest, with five facets, each of which has five arches, signifying the daily five prayers offered to Allah.Jamia Masjid, another wooden mosque in Indo-Saracenic is the largest, built in 1400 by Sultan Sikander.

In the heart of the city, rises the 304 meters high Shankaracharya Hill. It offers a panoramic view of the city, the valley and the Pir Panjal range. On the northeastern side is Hari Parbat, another sacred mount which has a fortification built by Emperor Akbar in 1592, surrounded by fragrant almond orchards. A Durga temple stands nearby at Chakreshwari. Then there are the Pather Masjid built in l620 by the Empress Noor Jehan, the Madani Masjid built by Sultan Zain-ul-Abidin, the poet- musician-ruler of Kashmir, the single greatest influence on the artistic heritage of the land.

No destination is quite so romantic, no setting as enchanting as Srinagar. More or less in the center of Kashmir, at an altitude of 1,730 meters above sea level, Srinagar's allure changes with the passing of each season. Srinagar is as much imagination as it is fact, for every season offers new vistas to this city of great antiquity. Spring breathes life again into a frozen world, and the air is heady with the fragrance of a million flowers that blossom on trees, shrubs and creepers. Summer heightens the effect, and autumn is poignant in its colours of warm introspection. Winter brings with it snow, sometimes the Dal Lake freezes, and beneath a leaden sky, roasted chestnuts turn the atmosphere aromatic with the promise of warmth and comfort.

Spring, which extends roughly from March to early May, is when a million blossoms carpet the ground. The weather during this time can be gloriously pleasant at 23 deg. C chilly and windy at 6 deg. C. This is the season when Srinagar experiences its rains, but showers are brief. 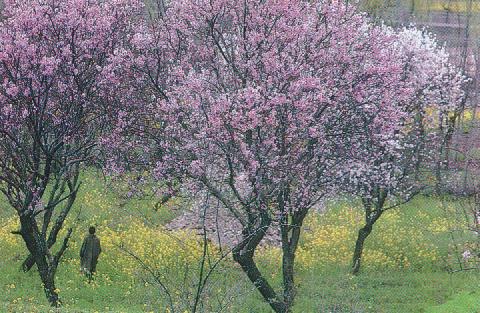 Summer extends from May until the end of August. In higher altitudes night temperatures drop slightly. Srinagar at this time experiences day temperatures of between 21 deg. C and 30 deg. C. At this time, the whole valley is a mosaic of varying shades of green rice fields, meadows, trees and Srinagar with its lakes and waterways is a haven after the scorching heat of the plains. 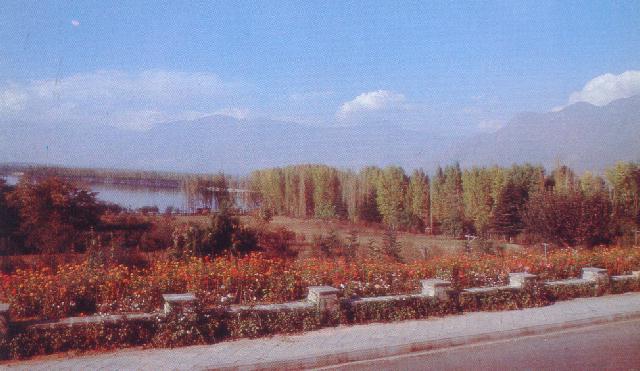 The onset of autumn, perhaps Kashmir's loveliest season, is towards September, when green turns to gold and then to russet and red. The highest day temperatures in September are around 23 deg. C and night temperatures dip to 10 deg. C by about October, lower by November when heavy woollens are essential. 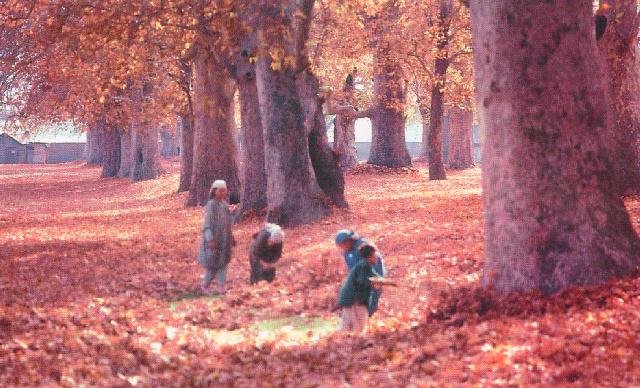 December through to the beginning of March is yet another mood of Srinagar. Bare snow covered landscapes being watched from beside the warmth of a fire is a joy that cannot be described to anyone who has not experienced it. Some houseboats and hotels remain open throughout winter these are either centrally heated or heated with bukharis, a typical Kashmiri stove kept alight wlth embers of wood, marvellously effective in the winter. 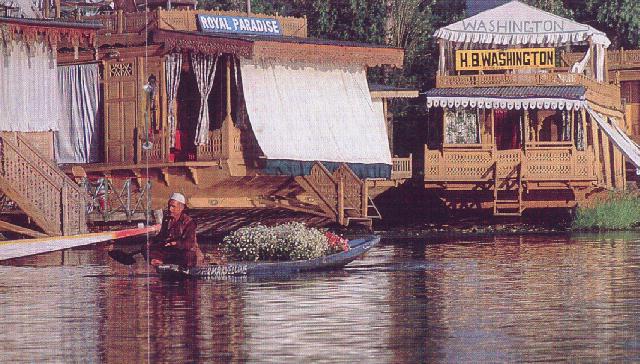 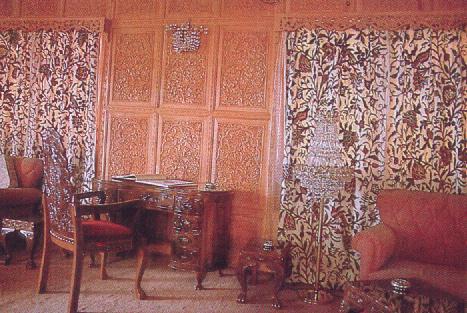 In the luxurious living room of a houseboat.