The itinerary of the average tourist to Ladakh usually begins by taking a tour of Leh, the capital and principal township of Ladakh. It invariably ends the sightseeing  the monstaries, justly famous, of Shey, Sankar, Phyang, Spituk and Hemis. Some might include Alchi, Likir and Lamayuru. Few if ever trek to interior villages, venture north to Narbu valley or visit the Zanaskar region.

However, the last few years have seen an increase in tourists to the western flank of Ladakh which comprises several valleys. Chief among these are Drass, Suru, Mulbekh and  Zanskar. Lying immediately east of the Greater Himalayan wall and drianed and formed by the westmost tributaries of the Indus river, these constitute present-day Kargil district. 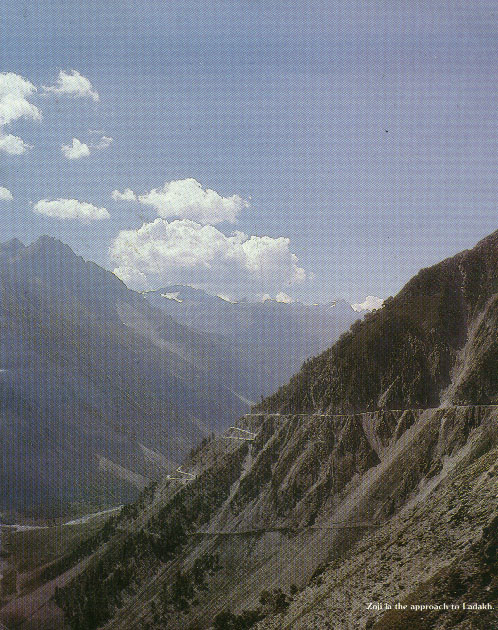 Zoji la - the approach to Ladakh

This region once formed part of the erstwhile kingdom of Ladakh. In fact, it was the first to be inhabited by the early colonists of Ladakh - the Indo-Aryan Mons, the Dards of Central Asia and itinerant Tibetans. Also, its valleys, by virtue of their proximity to Kashmir, Kishtwar, Kulu and Gilgit-Baltistan served as the initial receptacle of the cultural waves and ethnic movements that emanated from across the Greater Himalayan wall. As the area receives abundant water from rivers originating in the Greater Himalaya, the vegetation here is more luxuriant than in eastern Ladakh. The upper Suru valley, in particular, is famous for its extensive alpine grassland which attracts a large number of Bakarwal herdsmen from the Jammu hills.

About 15,000 sq km in area, these valleys sustain an agrarian population of approximately 70,000 people who cultivate the fertile soil mainly available along the course of rivers. The majority is Muslim (Shia faith), Islam having been introduced to them around the middle of the 16th century by missionaries from Kashmir and Baltistan. Their descendants, locally called Aghas, still hold sway, perpetuating their faith in the teeth of ancient folk traditions which speak of a mixed legacy of Buddhism and animism. Many folk traditions, particularly those connected with various stages in the agricultural cycle, are still followed by the people with subdued reverence.

The land approach to Ladakh is the 434 km Srinagar - Leh highway (Kargil falls en route). For most of the way, this road follows the traditional trade route between Srinagar and Leh, thus giving modern travellers a glimpse of villages which are historically and culturally important. The most dramatic part of the bus journey to Kargil is the ascent up the Zojila or Zoji pass, the gateway to Kargil district.

Several outfitters based in India and abroad organize long treks in the region. Mountaineering expeditions to Nun-Kun peaks are catching on. Equally enthusiastic is the response of students with an interest in social anthropology.

Kargil (2740m), 204 km from Srinagar, is the second largest town of Ladakh. It is also the headquarters of our destination, the district of Kargil. A quiet town today Kargil was once witness to the most hectic bartering among traders of different faiths and nationalities. Hundreds of caravans carrying silks, ivory, carpets and precious stones to and from China, Turkey, Yarkand, Afghanistan and India, passed through the town. Several caravanserais, now rendered dangerous due to years of disuse, can be seen in and around Kargil. Substitute travellers for traders and Kargil's position as a resting place remains unaltered. Tourists to Leh by road make a night halt at Kargil before starting on the second leg of the journey.

Kargil town lies in the lower Suru basin. Two other rivers that meet here are Drass and Wakha Chu. Visible all around are lush green fields of barley and wheat, vegetable beds and rows of poplars and willows. Kargil is famous for its apricots and mulberries. June presents a rare sight of fragrant white apricot blossoms while in August, the ripening fruit lends the countryside an orange hue.

In Kargil, one can see some of the finest examples of Turkish architecture. Day--long excursions can be taken to Mulbekh or to the Suru valley to observe the grandeur of the Himalayan range from close quarters. The evening can be spent profitably by walking along the river. The ancient fort bridge across it gives a splendid view of the tiered and terraced township sweeping down the hillside.

A stroll in the ancient bazaar might lead to a shop selling attractive flint and tobacco pouches, travelling hookahs and brass kettles - handcrafted items of everyday use which find their way into the mart as curios. Pashmina shawls, cloth paintings using Buddhist themes and symbols, and turquoise can be bought here at bargain prices. And who knows, perchance, you may brush shoulders with one of the Minaros (or Brokpas), a tribe that claims descent from the army of Alexander of Macedonia.

Situated 45 km east of Kargil on the road to Leh, Mulbekh (3230m) is a typical Buddhist village. The village and the surrounding valley take their name from a small watercourse which originates in the Zanskar range and meets the Suru river at Kargil. Many monuments of the early Buddhist era dot the landscape and are accessible from the village.

Mulbekh Chamba: The chief attraction of Mulbekh is a 9-metre rock sculpture in deep relief of Maitreya, the Future Buddha. Its execution combines esoteric Shaivite symbolism and early Buddhist art. Situated bang on the highway, it dates back to the period when Kashmiri Buddhist missionaries came travelling east of the Himalaya.

Mulbekh Gompa: Perched atop a rocky cliff, the Mulbekh gompa (monastery) dominates the valley. It is easy to see why in bygone times this site served as an outpost to guard the caravan route. Like all monasteries it is adorned by frescoes and statues.

Shergole: This is a small village (5 km short of Mulbekh) right of the Wakha brook on the Kargil-Leh road. Visible from afar as a white speck against the brown granite, the monastery here literally hangs out of a cliff.

Urgyan Rzong: This is a meditational retreat tucked away behind an amazing natural mountain fortress. Concealed inside is a green circular valley with a monastic establishment at its centre. The hillsides reveal caves where high ranking Buddhist saints perform penance in isolation. The only approach is a footpath laid through a narrow gap in the rocky ramparts.