This is a fertile valley of immense beauty. Its composite population of 25,000 of Tibeto-Dard descent are Muslims who converted their Buddhist faith around the 16th century. The farthest part of the valley consists of a picturesque alluvial pan towered over by the lofty Nun (7135m) and Kun (7035m) peaks. The green hillsides of the Suru valley are a contrast to the awesome Himalayan glaciers, notably Parkachik and Shafaat, which descend from their high anchor in the Nun-Kun massif down to the bed of the Suru in riverine formations. 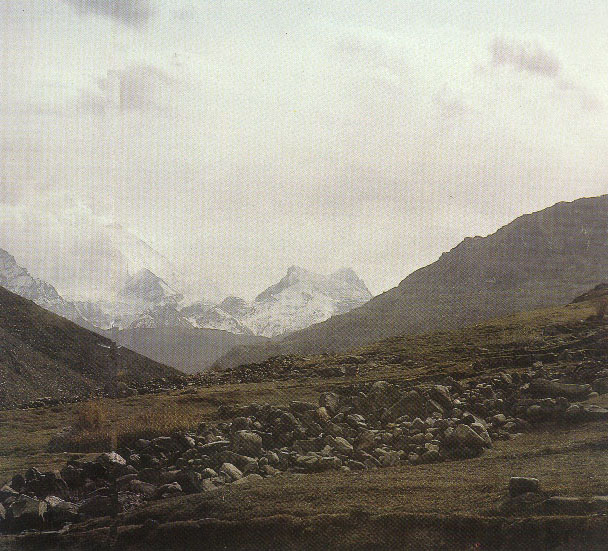 Suru Valley with the Nun-Kun massif in the background

Sankoo: A bowl-shaped expanse, this is a small township 40 km south of Kargil. It has the appearance of a man-made forest of poplars, willows and myricarea. Verdant hill slopes are offset by sheer rocky mountainsides and snowy summits. The architecture of the Imambaras and mosques here, is a blend of Turkish and Tibetan styles. Sankoo is also the base for a four-day trek to Mulbekh and a three-day trek to Drass. In a side valley, about 5 km from the roadhead, Kartse village has a seven--metre tall rock sculpture of Maitreya.

Panikhar: Kargil, 67 km, is the base for visiting Panikhar the central area of the valley. A short hike takes one to the Nun view-saddle (3810m) from where a panoramic view of the two peaks and the glacial plateau can be had. Another possibility is to ascend the Sentik ridge above the village of Tangole to approach the glacial plateau. Treks from here lead to Pahalgam (5 days) and Kishtwar (6 days). The Imambaras and mosque at Taisuru near Panikhar, are worth beholding for their architecture.

Rangdum (3657m): This is an isolated amphitheatre like valley which lies 130 km from Kargil (65 km from Panikhar). Enchanting in its beauty, it has two small hamlets and a monastery that date from the 17th century. The villagers are basically the agricultural serfs of the monastery, which like many other monasteries is perched on a high hillock. The region is ideal for camping hiking and horse riding. A five-day trek can be undertaken for Henaskut and Lamayuru through the Kanji valley.