About 35 km south-east of Rangdum, just across the Penzi la (4390m) watershed, begins the most ravishing of all the trans-Himalayan valleys. Spread over 5,000 sq km, Zanskar has a sparse population of Indo-Tibetan descent. The geographical inaccessibility and the esoteric nature of Buddhism practiced here, gave its inhabitants the freedom to preserve and perpetuate their cultural identity. So that today Zanskar is one of the least interferred with microcosms of Ladakh and one of the last surviving cultural satellites of Tibet.

Within the mountain ramparts of the valley stand some ancient yet active monastic establishments. Close observation of the living conditions evokes admiration for a people who have learnt to live in tune with nature. 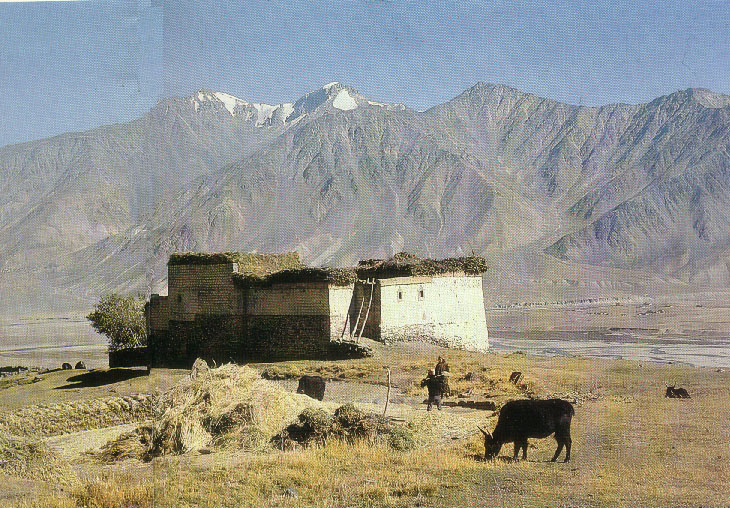 A typical rural scene at Zanskar

Padum: Once the capital of the ancient kingdom of Zanskar, Padum (3505m) is the present-day headquarters of the Zanskar region. The small township clings to a hillock, site of the ruins of the erstwhile palace and fort. Ancient rock carving dating from the 8th century can be seen at the river bank.

There are several monasteries in and around Padum. The one at Stagrimo entails an hour's uphill walk while the one at Pibiting is a magnificent piece of stupa architecture. Believed to have been founded by Kanishka (the ruler of the Kushan dynasty) in the 2nd century, the monastery at Sani is 6 km from Padum.

Karsha: The largest and wealthiest of all the monasteries in Zanskar, Karsha has a fine collection of Himalayan art. Its 500-year old frescoes, housed in the Lhabrang, the chamber where teaching is conducted, are in a good state of preservation. The journey to Karsha, which lies on the other side of river Doda, takes two hours on foot. It is also connected by a 17 km long motorable stretch to the Kargil - Padum road.

Stongdey: This monastery stands on a rocky outcrop 20 km from Padum. Of particular interest is the Gon Khang or the temple of guardian deities, within the monastery.

Burdan: The large assembly hall of the monastery at Burdan, 12 km from Padum (on the route to Manali), houses idols and stupas in clay, bronze, copper and wood.

Zangla: Lying in the northern arm of Zanskar valley, Zangla, 35 km from Padum, is still ruled by a king. His castle stands sentinel over this isolated mountain community where one can see one of the last remaining suspension bridges - a rare feat of primitive engineering. It takes 5 hours to reach Zangla on horseback and just one by jeep. The village is the take-off point for the Padum - Lamayuru and the Padum - Hemis treks.

Phugtal: It is one of the two rare cave monasteries of Zanskar. The monastic complex appears to spill out of the mouth of a huge cave which shelters several temples. Since this is an isolated habitation, an air of mystery hangs over the place. A visit to the monastery and its environs makes a 5-day round trek.

Zongkhul: This cave monastery is situated on the Padum-Kishtwar route. Its founding is ascribed to Naropa, the celebrated Indian teacher who lectured in the universities of Nalanda and Vikramshila.

Climatic requirements: In the summer months, early June to end of August, temperatures fluctuate between 5°C and 25°C. A warm day can suddenly get cold thus requiring immediate change of clothing. General items are a woollen pullover, a down jacket (or wind cheater) sturdy boots for walking, a backpack, and a sleeping bag. It is also essential to bring tents if the intention is to travel or trek on your own, and a good quality rucksack (fancy luggage like suitcases are out). 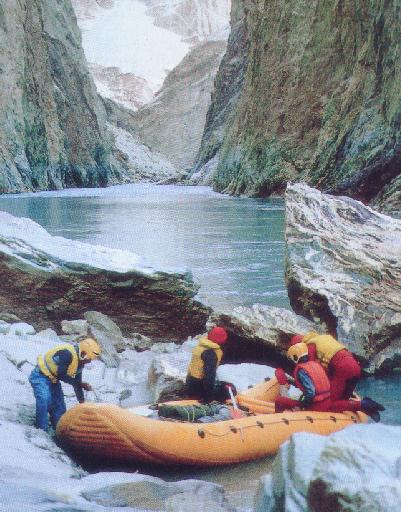 Preparing to run rapids in Zanskar