The Kashmir school of painting is an obscure topic in the otherwise scholarly field of Indian art history, although much has been written about the ancient Kashmiri architecture and sculpture in recent times. It is true that Kashmir yields no archaeological remains of paintings nor do we know anything regarding the painting to reorganise the chronological history of painting in Kashmir. This paucity of archaeological material, of course, poses a severe lacuna in reorganisation and interpretation of the history of painting of Kashmiri people in early days but nevertheless it means that painting was an unknown or omitted discipline of fine arts to the Kashmiri society. An advanced culture like Kashmir that had well organised style of architecture, sculpture and other arts would never ignore the art of painting as it has been a most expressive and lively medium of human feelings and creative impulse. However, paintings being fragile in nature have completely disappeared from Kashmir on account of its unsuitable climatic conditions and ravages of wars. But the paintings created by the medieval artists of Kashmir have fortunately survived in the Trans-Himalayan region where climate preserved them. The earliest surviving examples of Kashmiri painting come from Gilgit which date from about 8th century A. D. Paintings discovered from Gilgit represent a highly developed style which did not appear overnight. Kashmiri craftsmen, long-famed in the North Western Indian peninsula, used to be invited to Central Asia and Tibet to decorate Buddhist monasteries. All the earliest monasteries of Tibet and Western Tibetan provinces used their services and their artifacts were in ever greater demand.

References of paintings in ancient Kashmir literature are very limited and scattered. It is only by piecing together the literary references and combining them with sculptural index a picture emerges of plausible form of painting which corresponds to the paintings that are preserved in the Buddhist temples of Ladakh and Western Tibet. Ancient Tibetan chronicles register clear evidences pertaining to the school of painting in medieval Kashmir. Biography of the great Tibetan scholar Rinchen Sangpo ( 950 - 1055 A . D. ) registers an important reference that he visited Kashmir three times from Guge to obtain the services of Kashmiri craftsmen and teachers to reorganise and re-establish Buddhism in the Tibetan world. He is credited to have built one hundred and eight temples in Western Tibet with the help of seventy five skilled Kashmiri craftsmen and painters. In certain stances, name of particular artist is found. Some of the temples of this epoch have survived which still preserve the markmanship of those artists who were invited to build and decorate the temples. Another important information is recorded by the 16th century Tibetan polygrapher, Lama Taranath who writes in his "History of Buddhism in India " that when the kings Dharmapala and Devapala (8th-9th century) were ruling in Eastern India, there flourished two art schools namely, the Eastern Indian School established by Dhiman and the Madhyadesha school established by Pritipal son of the former. At the same time, Kashmir had its own distinct school of painting and metal casting under Hasuraja. Lama Taranath further comments that the school of Kashmiri art was influenced by the Madhyadesha school up to some degree. There was another school localised in Marwar established by Sringadhari which spread its influence far away in Kashmir, Punjab and in the northwestern provinces, of India.

The foregoing and a brief survey of Kashmiri sculpture makes clear that the genesis and evolution of Kashmiri art was not an isolated phenomenon rather possessed an unified character with the mainstream of Indian culture. To interpret the Kashmiri painting it would be necessary to consider certain factors like geographical, social and political, which in fact determine the whole personality of a culture and its art. Kashmir being north-western frontier province of India, enjoyed a melting-pot position where various cultural cross currents from East and West happened to mingle together and influence the development of contemporary art which appears, basically, eclectic in character. From or even earlier to the time of Mauryan Emperor Ashoka Kashmir was intimately associated with Gandhara and had cultural and political relationship with Afghanistan, Central Asia and Southern India.

From 7th-8th century onwards the school of Kashmiri art acquired distinct features when Kashmir emerged as a powerful kingdom in northern India. Before this period, the whole region from Kashmir and Gandhara to Bamiyana, Central Asia and Southern peripheries of Iran was under an unbroken chain of tradition which interlocked all the flourishmg centres of trade and Buddhism contemporaneous to each other. The stucco figures found in the ancient sites of Ushkur, Akhnoor ( in Kashmir ), Hadda, Taxila, Baniyan, Fardukistan, Begram, Shoforak, Adzitepe, Fayaztepe, Airtam, Yarkand, Kizil, Dandan uilik, Khotan, Kashgar etc. display a striking affinity in their style which points to a common artistic tradition that overwhelmed the whole region. These stucco figures approximately date from 5th-6th to 8th century and present a beautiful synthesis of the Gandharan and the Gupta Indian tradition. Similarly fragmentary examples of paintings survived from Baniyan, Fondukistan, Balewatse, Dandanuilik etc., stylistically appear to be analogous to the stucco figures. The Indian influence crystallised into the art of Central Asia may be attributed to have transmitted through the medium of Kashmir as then Kashmir was one of the greatest centres of Buddhist learning and art which played a key role in the spread of Buddhism in Central Asia and Far East.

With the discovery of Gilgit manuscript paintings, the interpretation of the Kashmiri painting gets an authentic base line. The Gilgit manuscript paintings are assigned to the Kashmir school of the 9th century but stylistically, they may date even earlier in the 7th-8th century as their nearest parallels are found in the Kashmiri stone sculptures dated to the 8th century from Pandrethan. Well organised style of the paintings of Gilgit manuscript appears to be the result of a chronological evolution to which Kashmiri painting underwent. Painted figures of Boddhisattva Padmapani from Gilgit demonstrates the mingling of the Gandharan and the Gupta Indian mannerism with certain local elements. Physiognomy of the figures in the paintings from Gilgit is characterised by muscular and sturdy-built bodies; the faces are typical Gandharan while the iconography and spirit are purely Indian. This whole combination may be called the basic characteristic of medieval Kashmiri art which is very well demonstrated in the sculptures produced in the period of King Lalitaditya ( 925-56 ).

The Kashmiri artistic tradition of Lalitaditya's period seems eclectic in nature synthesizing the Gupta Indian, the Gandharan, the Central Asian, the Iranian and the byzantine traditions. Lofty fame and prosperity of Lalitaditya's monarchy attracted many more traders and artists to settle in Kashmir from far afield. At the same time, Arabic hoards in Egypt, Syria, Central Asia and Iran compelled the craftsmen and Buddhist community to take refuge in peaceful Kashmir who in turn enriched the art and culture of the age.

In Lalitaditya's time, Roman, Syrian and Central Asian artists were available in Kashmir. On this basis, affinity of Kashmiri architecture with western architecture can be explained while sculptures of the same construction remained Indian in spirit.

After Lalitaditya, Kashmiri style appears to have changed slightly and in its new get-up it sustained till 10-11th century. This phase is supposed to be the most developed stage of Kashmiri art style when its fame spread in the remote Himalayas and before facing decay in Kashmir due to lack of patronage and religious upheaval, it was grafted into Tibet for further flowering.

Roerich has designated the Kashmir school of art of the 9th century as Avantipura school as the best examples of Kashmir art are found at Avantipura complex built by King Avantivarman (855-883 A. D.) of Kashmir who was a great lover of fine arts. This new style of Avantivarman's time is an amalgam of various earlier prevalent forms like Gandharan, Greaco-Roman, Sarcarenian, Chinese, Central Asian and over-all Indian. Best representation of this style is found in the good numbers of Kashmiri bronzes dated to 9th to 11th century cast by Kashmiri craftsmen for Tibetan patrons. The style of such bronzes presents a remarkable affinity to that of wall-paintings dating to 10-11th century decorated in the Buddhist temples of Western Tibet. In this connection, Roerich opines that the act of Avantipura school strongly influenced the development of art tradition of Western Tibet in 10-11 century.

The characteristic features of the Kashmiri paintings represented in the paintings of Mang nang lie in naturalistic colour modelling which is very prominently carried out in the female figures with the help of tonal variation of body hues to produce an impression of volume. In the female figure, the artists have applied the aesthetic canon following the standard characterised in medieval sculpture of Indian mainland. Female figures appear voluptuous having a balanced proportions and sensuous limbs. A unique feature of physiognomy equally observed in Kashmiri paintings and sculptures is the treatment of abdominal portion. It depicts slightly pouched sensuous lower belly and tight abdominal muscles around navel which divide the abdomen in four compartments. The facial type is marked with ovaloid face, fleshy cheeks, double chin, aquiline nose and full lips, highly arched eye brows and almond shaped eyes. Another characteristic feature lies in the depiction of eyes in case of three fourth profile faces where one eye projects in outer space which reminds of Western Indian paintings. The paintings present a rich variety of costumes used by the contemporary society. In the treatment of costumes and ornaments, the artists have meticulously executed the finest details of diaphenous and embroidered garments and intricate design of ornaments.

The colour scheme of Kashmiri paintings is very attractive as lapis lazuli blue and malachite green dominate the palette. The colours are used in various shades and tones but all very soothing and soft unlike Eastern Indian and Nepalese school. The Kashmiri colourpalette resembles that of Central Asian.

The wall paintings identical to Mang nang are found in the 10th-11th century Buddhist monasteries of Western Tibet, Ladakh, and Spiti such as Alchi, Mongyu, Tsaparang Thaling, Twang, Tabo etc., All were built during the period of revival of Buddhism in Western Tibet with the help of Kashmiri craftsmen commissioned by Rinchen Sangpo. These wall paintings present a final stage of progression of the Kashmiri style which reminds something related to the distant Ajanta.

The story of Kashmiri painting does not end here. In fact, at the time of its culminnation it was shifted into western Tibet where it played a formative role in the genesis of Guge school of painting and later so called Tibetan painting. After the 11th century, art in Kashmir gradually lost patronage and degenerated and with the advent of Islam it suffered considerably. Nevertheless, it was not completely forgotten. With the socio-religious and political changes in Kashmir, the art of painting changed its nature and later made significant contributions to the school of Mughal painting.

However, the sole purpose of this discussion is to highlight the point that in ancient and medieval Kashmir, there was a distinct school of painting of its own. 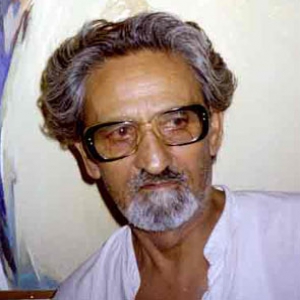 the first generation of artists who formed the Progressive Artists Association of Kashmir. To his generation belonged the artists like Shri. P.N.