This is an appeal by the intellectuals of a small yet distinct ethno-religious community, the Kashmiri Pandits (Hindus) who have a history of more than five thousand years of a rich cultural tradition and a unique religious philosophy of the universality of man, peace and amity amongst peoples. Down the ages, this aboriginal community of the valley of Kashmir has readily opened itself to foreigners of all faiths, creeds and professions who came as travellers and settlers. However, it has repeatedly been the tragic victim of religious persecution, forcible conversion, violence and brutal massacre at the hands of invading muslim zealots and religious fanatics leading to repeated exodus of the community, rendering it a minority in its own land. 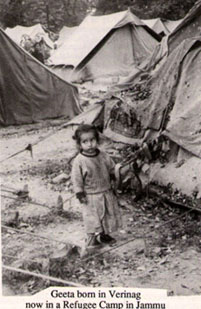 This appeal gives a brief outline of the barbarities that the community faced at the hands of the despotic Muslim rulers since the heydays of Islamic fundamentalism, as it made inroads into Kashmir after the 13th century. It traces the present escalation of human rights violations amounting to genocide of this community to a cruel and criminal conspiracy by the fanatical and fundamentalist forces which gained ascendancy and got fresh impetus during the last four decades. It also provides a bird's eye-view of the sprouting of dormant forces of Islamic Fundamentalism during these years in the religious schools that mushroomed in the valley and became nurseries for the growth of religious hatred, militancy and terrorism. This indoctrination prompted and incited young cadres to cross over to Pakistan and Pakistan-held Kashmir so as to receive arms training and carry out the diabolical plan for the muslimization of Kashmir as a prelude to its secession from secular democratic India. The hounding out of more than three hundred thousand Kashmiri Pandits (Hindus) from the valley from 1989 onwards was the first phase of this sinister operation.

This appeal brings out in vivid detail persecution of the minority community followed by threats, abductions, extortions, tortures and killing by brutal means of its members from all walks of life which led to exodus. A virulent disinformation campaign was started before the mass exodus against this community and followed up with fanatical zeal, after the exodus, in order to secure total ruination of the community. The present plight of the community, once given to academic, philosophical and spiritual pursuits, and now rootless and without identity, is given in some detail. Over one thousand members of the community have been killed by the terrorists and the thousands are dying in the miserable camps for want of basic amenities, shelter, medicare and family support; and thousands of its youth are getting scattered in search of livelihood. It is feared that at the present rate of dispersal the community is disintegrating beyond redemption and facing total extinction.

This appeal invokes the conscience and compassion of the civilized world to grasp the grim tragedy facing the Kashmiri Pandit community and to stand up and speak for it and help it regain its lost status and get rehabilitated once again, with honor and dignity in its own homeland.

One of many refugee camps at Jammu.

The armed subversion by Muslim fundamentalist/terrorist youth to destroy the pluralistic, secular socio-political character of Kashmir valley and reduce it to a reactionary, monolithic, theocratic one, has entered its seventh year of operation.

The Kashmiri Pandits (Hindus) in the valley of Kashmir, irrespective of their age, sex, position status or situation became the prime target of the terrorists onslaught.

Not content with the tempo of exodus of the ethnic minority community, the Muslim religious zealots pressed into service the local daily newspapers and started periodic write ups in a vituperative and malicious propaganda offensive against the Kashmiri Hindus

Within months of the exodus of Kashmiri Pandits the Government, whether out of misplaced optimism to placate and appease the terrorists or with deliberate intent, started recruiting and promoting Muslims to the posts and positions vacated by the Kashmiri Pandits.

The last few years have witnessed a perpetuation of human rights\' violation against this community which had to leave the valley helter-skelter and got dispersed far and wide in different parts of the country.