Kashmir is unique among all the crisis points along the Indo-Pakistani border in that a marked escalation of the fighting -- both insurgency and regular -- is virtually inevitable before any effort for a peaceful solution can succeed. The primary reasons is the extent of the ideological commitment and self- interests of several of the key players involved.Â 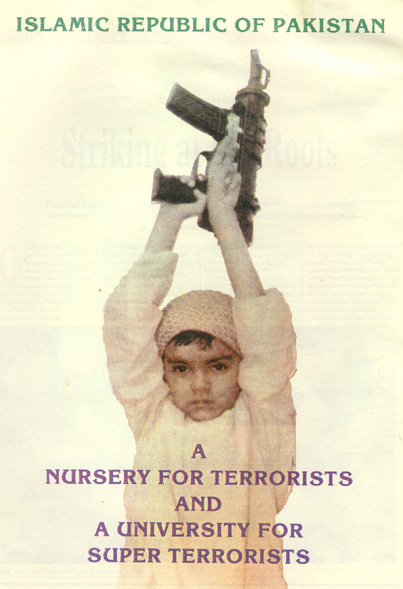 Arming of militants in Pakistan

In Kashmir Valley an insurgency is going on. But it is not by the local community. There is a lot of evidence to suggest the insurgency is organised, assisted and triggered by forces outside India.

Some ISI officers apprehended in India

The support of secessionist terrorism has become an integral part of Pakistan diplomacy.

Which nation supports the largest terrorist operation in the world?

Which nation supports the largest terrorist operation in the world?

Graph comparing deaths due to terrorism sponsored by Pakistan

Graph comparing deaths due to terrorism sponsored by Pakistan

A Bird Eye View of the Pakistani Terrorist Machinery

A Birds Eye View of the Pakistani Terrorist Machinery

Tribal Raid of 1947 Supported by Pakistan

This thematic issue of Kashmir Sentinel commemorating 60th Anniversary of Tribal invasion is dedicated to the memory of brave Indian soldiers who died fighting Pakistanis.

Yossef Bodansky is the Director of the Congressional Task Force on Terrorism andYossef Bodansky Unconventional Warfare at the US House of Representatives.