This communal carnage and forced exodus was followed up with a virulent campaign of vilification and disinformation against the Kashmiri Hindu community with the twin objective of covering up the true communal-fundamentalistic character of the so-called freedom struggle of the terrorists and securing total ruination and annihilation of this ethno-religious minority. This propaganda offensive was backed up by canards floated across the length and breadth of the country that:

i) the Kashmiri Pandits migrated out of the valley because they were touted by Mr. Jagmohan, the then Governor of Jammu and Kashmir, who promised them relief, ration and land. That those who were gunned down, hanged or tortured were informers and enemies of the "freedom struggle". This canard took such deep roots inside and outside the valley that the poorly informed public even of cosmopolitan cities like Delhi and Bombay who go by the common knowledge that in India Hindus are in majority and by corollary the majority in Kashmir valley are Hindus, failed to understand why Kashmiri Hindus had to flee their homes and hearths. Only the committed demographers in the country realise that Kashmiri Pandits (Hindus) are a minority in the Muslim majority Kashmir valley of a Hindu majority India.

ii) the Kashmiri Pandits are over-represented in Central and State Government Services and private Jobs and that this was a major source of irritation with the disenchanted Muslim youth, who out of frustration took to arms to fight for their justful rights. This canard has been supplemented and reinforced by distorted statistics and the thread has been skillfully taken over by some self-proclaimed humanists and over-zealous politicians of the country who want to prove more secular than their credentials allow. In fact they found it a useful tool to convince themselves and the world that terrorism in Kashmir was not an armed subversion aimed at the secession of the State from the union of India but an act of frustration of a handful of "disgruntled and misguided youth". This ill conceived notion though countered by the exiled Kashmiri Pandits, fell on deaf ears and did not get the attention of the media which were only vying with each other to score points for the terrorists and their cause. It did not take long for the communal, fundamentalistic and subversive character of terrorism to emerge in its true colour.

iii) the Kashmiri Hindus because of their merit, cunning and influence would become usurpers and take over educational institutions, professional colleges, trade, industry, Government jobs etc. in Jammu, Delhi and other places where they have taken refuge. This disinformation caused tremendous confusion, panic, over-reaction and even hostility in the host towns which were ill equipped to accommodate such a sizeable- influx of refugees, especially in Jammu where seventeen camps have been set up in the suburban dingy areas, Stiff resistance was put up even for admission to the exiled students in various educational institutions; jobs were denied to the youth and all doors were closed for the rehabilitation of professional and non professional personnel of the community. A community which prided itself in its academic excellence and high professionalism is idling and rotting, for the last six years.

While torture, persecution and killing were going full steam side by side with the canards floated against the fleeing community, the marauding terrorists started loot, plunder and arson of the properties and estates left behind by Hindus. They desecrated and destroyed their temples, confiscated their stores and stocks, stole their kind, harvested their crops and encroached upon and annexed their lands. Till date more than three thousand Hindu houses have been blasted or razed to ground. The remaining have been looted, vandalized or occupied. 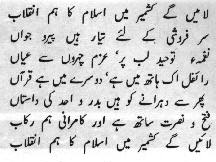